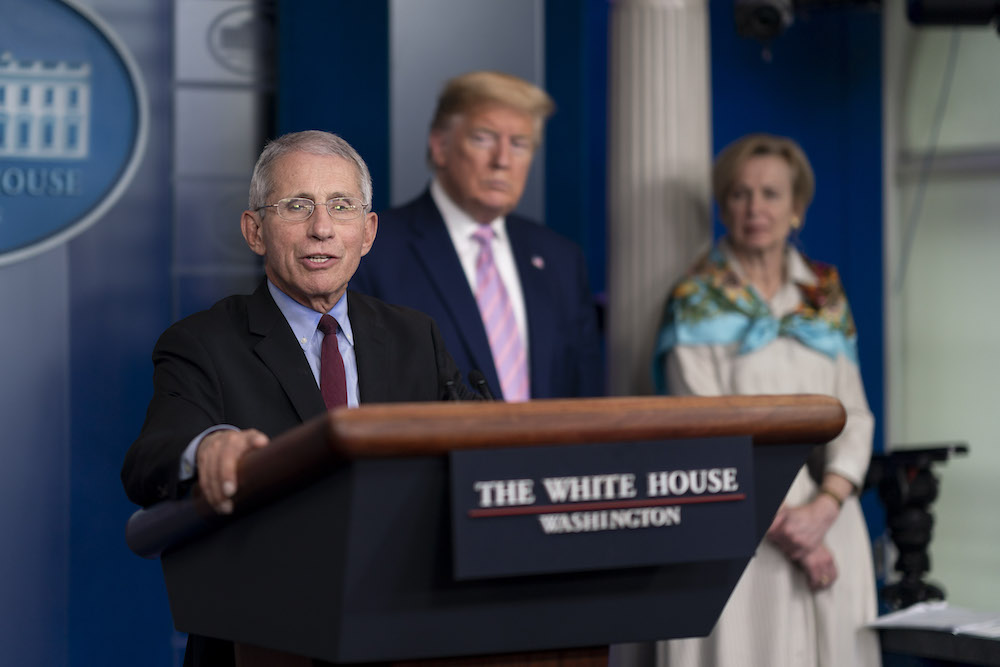 Along with their many personal graces and decades in public service medicine, Drs. Anthony Fauci and Deborah Birx are the kind of truth-telling health professionals desperately needed by a nervous public as it deals with the coronavirus outbreak. During almost daily televised briefings since March, in which Fauci and Birx, part of a White House task force meant to counsel President Donald Trump on the pandemic's scientific mysteries, both doctors positioned themselves next to the president.

Problem was, they were highly visible but hardly heard. The Washington Post reported that in one three-week stretch, Trump hogged the podium 63% of the time against Birx's 10% and Fauci's 5%. Whether it was happy talk — "we're going to have a tremendous success" or sappy talk — "hydroxychloroquine is a game changer" — Trump had all the airtime any preening egomaniac could ask for.

Which raises unsettling questions. Briefing after briefing, why did Fauci and Birx let him get away with all the babbling? Why did not Fauci, a proven expert on infectious diseases, take the microphone to say that with soaring numbers of people dying from the virus, this is no time to heed Trump's call to "open up the country." Nor was it a moment to be silent when the president not only lauds the mobs protesting and defying the stay-at-home orders, but eggs them on.

There should never be a moment for Fauci to ignore the reality that Trump is a serial liar, as reported by The Washington Post's January tally of 16,241 lies or false claims in the three years of his presidency — an average of five a day. In mid-April, Trump bragged that under his unique leadership, the 30,900 COVID-19 deaths had "passed the peak" and with falling numbers "we'll be the comeback kids." Weeks later, the toll topped 80,000 deaths.

In March, Fauci expressed his uneasiness about Trump's dishonesty. In Science Magazine, the interviewer said to Fauci that "most everyone thinks that you're doing a remarkable job, but you're standing there as the representative of truth and facts, and things are being said that aren't true and aren't factual." Fauci: "I can't jump in front of the microphone and push him down. OK, he said it. Let's try and get it corrected for the next time."

Fauci could choose one of two options, starting with the immediate one of waiting until Trump tells another lie and then taking the microphone to refute it with sentiments like this: "Mr. Trump, with all due disrespect, I'm weary of your using these briefings to dispense guff and think you are beyond being accountable to the public for it. The virus death toll is rising, and you're here as if this is another one of your campaign rallies. Do take this personally. You disgust me. I've had enough."

Leaving the room, all Fauci has to fear is the suspense of which epithet Trump will be tweeting in slamming him back, as has been done with "Shifty" Adam Schiff, "Wacky" Omarosa, "Slimeball" James Comey, "Horseface" Stormy Daniels, "Mini Mike" Bloomberg, "Sloppy" Steve Bannon, "Crooked Hillary," "Sleepy Joe," "Psycho" Joe Scarborough and an endless list of others who dared see Trump as slightly less than a genius.

Option two is for America's doctor is to finally end his complicity of attaching himself to a scabrous politician whose habitual abuse of power, honesty and basic civility is spreading like a virus on the political landscape.

The call to Fauci and Birx is clear: End the enabling of Trump. End standing behind him as he rants against reporters for asking "nasty questions." End listening to the shallowness of his vocabulary. In his briefings, he uses many "greats" including "we've done a great job," "we'll have great growth," "They're great people." Also, "incredible" — "we have incredible testing." Fantastic. Phenomenal. Tremendous. All crutch words on which Trump hobbles along in linguistic lameness on Cliché Avenue. 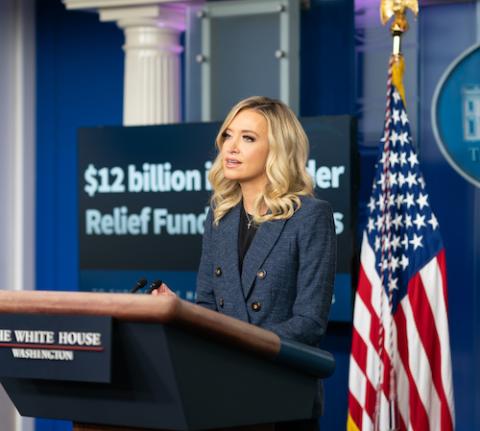 Amid the briefings' torrent of deceits, contradictions, denials, personal attacks and slights, it was Birx who surely had a strong claim on being personally offended when Trump announced his cure for COVID-19: start injecting disinfectants into the lungs of patients. "Then I see the disinfectant where it knocks it out in a minute, one minute." Sitting a few feet to Trump's right, Birx, the response coordinator for the White House task force, was stone-faced and tight-lipped. It was a chance to condemn Trump's stupidity, warn the public not to start injecting or swigging Lysol or Clorox and then stand up and walk out. It was left to other doctors around the country to label Trump's "cure" as horrific, extremely dangerous, frightening and irresponsible.

If Fauci and Birx hesitate to stand up to Trump's abusive power, perhaps it's because from his White House sty, Trump shows no sign of self-restraint. In mid-May, he was quick to criticize Fauci for telling a Senate committee that more death and suffering lurk if reopening the country proceeds hastily.

In April, Kayleigh McEnany began as Trump's fourth White House press secretary. In her first appearance at the podium May 1, she promised America that she would never lie. It could happen, but what if lying, like a virus, is contagious and she gets the disease of deception from her boss? Take a pint of Lysol for it? Maybe Clorox?