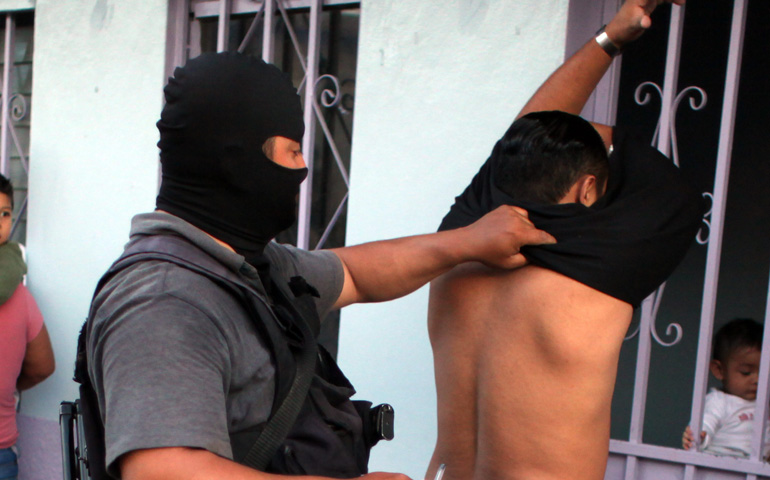 A member of the Honduran police arrests a man during anti-gang operations in 2012 in an area controlled by gang members in Tegucigalpa, Honduras. (CNS/Gustavo Amador, EPA)

The legacy of a military coup that toppled a democratic government in Honduras eight years ago is ever present today: spiraling high-level corruption, endemic poverty, high crime rates, state repression, terror and targeted assassinations of environmentalists, indigenous leaders and journalists.

Not to mention a military used as a police force to suppress dissent and protect predatory corporations, along with a vast secrecy law that allows the government to operate with impunity and largely in the dark, keeping its key actions, investments and dealings secret.

The coup overthrew President Manuel Zelaya and was consolidated in the summer of 2009, supported by then-Secretary of State Hillary Clinton, along with U.S. aid and training of the Honduran military — which has continued to this day despite the growing corruption and repression.

The country's deterioration has been extensively documented this year by two major studies. The London-based watchdog group, Global Witness, reported in January that the coup ushered in a succession of corrupt right-wing governments that oversaw "shocking levels of violence and intimidation."

Honduras, it said, was the deadliest place on the planet to be a land or environmental activist. More than 120 activists had been assassinated since the 2009 military coup, including the country's most prominent, Berta Cáceres. She was on a hit list of U.S.-trained Honduran special forces and long targeted for her efforts to stop the plundering of indigenous lands by hydroelectric, mining and logging interests. Despite international outrage over her 2016 murder, the assassinations have continued.

Related: One year after Cáceres murder, US ties to Honduras endure, killings continue

The Carnegie Endowment for International Peace concluded in its May 30 report, that "corruption is the operating system" in Honduras, involving "transnational kleptocratic networks."

It's a system of "sophisticated networks that link together public and private sectors and out-and-out criminals — including killers."

The networks, it said, "rely on one or more informal instruments of force to administer violent correction when other means of intimidation fail to deter those who stand up to them."

Urban gangs have served as police auxiliaries, it said, and "private security companies, employed to protect dams or palm plantations, may attack protesters side-by-side with the police or armed forces, or alone."

Journalists have also been a prime target. Reporters Without Borders calls Honduras one of the hemisphere's deadliest countries for journalists.

"Journalists with opposition media and community media," it said, "are often physically attacked, threatened, or forced to flee abroad. Abusive legal proceedings are also often brought against journalists, and prison sentences and prohibitions are frequent."

Three have been assassinated so far this year. In January, prominent TV journalist Igor Padilla was gunned down in the street by four masked gunmen in police uniforms. In June, Victor Funes, director of a TV program, was slain outside his home, and a month later, journalist Edwin Rivera Paz was murdered execution-style in Mexico where he had fled after Padilla, his close colleague, was assassinated.

Reporters Without Borders has condemned the killings along with the secrecy law, which states that information can be classified as secret if it "could produce undesirable institutional effects on the effective development of state policies or the normal functioning of public sector institutions."

The unraveling of the country has become so dire that opposition parties on the left and right have joined forces in an unprecedented move. They have formed a party — the Opposition Alliance Against the Dictatorship — which aims to stop the current right-wing president, Juan Orlando Hernández, from maintaining his grip on power in this November's elections.

Hernández — who, with his National Party, admitted stealing funds from the National Health Service and diverting the money into their 2013 election campaigns — won that year's presidential election amid claims of voter fraud.

Hernández created a political storm when declaring his candidacy for reelection. The Honduran constitution limits presidents to a single four-year term, and coup plotters had used that prohibition as a pretext to overthrow Zelaya in 2009.

Zelaya was falsely accused of seeking reelection because he had placed a nonbinding referendum on the ballot asking voters if they favored having a constituent assembly revise the constitution. Zelaya, a wealthy rancher unpopular with the elites for raising the minimum wage, was overthrown on the day the referendum was to be held.

Hernandez's bid for seeking another term was even condemned by Gen. Romeo Orlando Vásquez Velásquez, the head of the Honduran military who led the coup ousting Zelaya.

Hernández has defended his action by citing a two-year-old Supreme Court ruling, suspending the constitutional ban against reelection. Critics argue that the court didn't have the authority to do so, that it required a vote of the people. Furthermore, the full 15-member court did not vote to suspend the constitution, but only a five-member panel, most of whom were appointed by Hernández.

The Opposition Alliance has chosen a centrist as their presidential candidate, Salvador Nasralla, an industrial engineer turned TV star. His leftist running mate is Zelaya's wife, Xiomara Castro de Zelaya, who finished second to Hernández in the 2013 race.

The alliance says its priorities will be offering free health care to the poor; combating corruption, poverty and the country's powerful elites who are closely aligned with foreign interests at the expense of the common good; and ending impunity by prosecuting those behind the assassinations.

It also plans to seek a voter referendum on convening a constituent assembly that would allow broad sectors of society to rewrite the country's constitution, and to seek an end or curtailment of U.S. military involvement in the country.

The U.S. Army School of the Americas, now known as the Western Hemisphere Institute for Security Cooperation, has trained nearly 5,000 military officers from Honduras — one of its top clients, with 261 being trained last year alone.

Hernández, a U.S. ally, has promised to build new prisons and dramatically cut the murder rate by December.

His crime reduction strategy, however, relies on the military and carries a high price.

The Carnegie report is highly critical of the way the military is being used.

"Apart from deployment to gang-ridden neighborhoods and involvement in counternarcotics," it said, the military "is an instrument for the consolidation of power, the protection of the private property or business interests of private-sector network members, and intimidation."

The military, it says, is used "to patrol indigenous communities, to protect land or developments claimed by private-sector network members as their property, to suppress protests against the transfer of such land or natural features into network hands, to curtail the exercise of free speech, and, most broadly (via Hernández's new Military Police for Public Order, or PMOP from its Spanish name), to assume a wide variety of domestic security and policing roles."