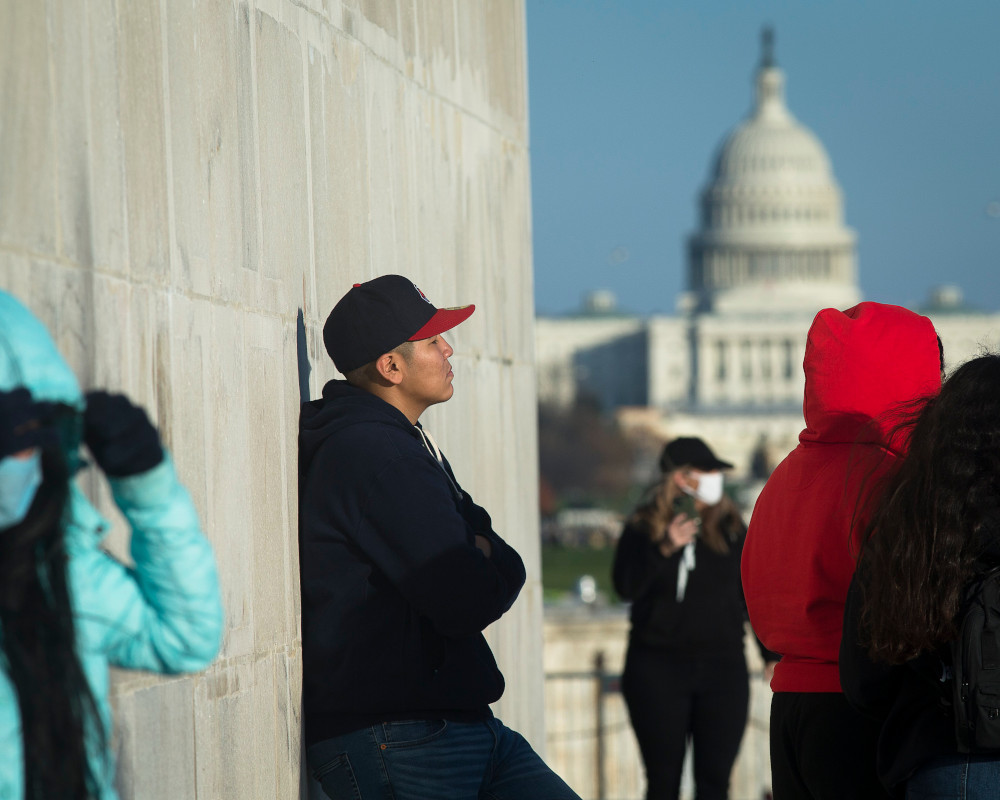 People are seen at the Washington Monument in Washington Nov. 28, 2020. The U.S. Supreme Court Nov. 30 heard oral arguments in a case brought by the Trump administration to exclude from the census those in the U.S. without legal documentation. (CNS photo/Tyler Orsburn)

In oral arguments Nov. 30, the Supreme Court weighed in on President Donald Trump's order to exclude immigrants living in the country illegally from the 2020 census for purposes of redrawing congressional districts.

The justices, who heard the arguments in Trump v. New York by teleconference, questioned the scope of those who would be excluded and also the length of time it would take to undergo this "monumental task," as Justice Samuel Alito described it.

Trump issued his order in July and two federal courts have already found it unlawful.

During the 90-minute arguments, Auxiliary Bishop Mario E. Dorsonville of Washington, who is chairman of the U.S. Conference of Catholic Bishops' Committee on Migration, issued a statement: "Denying the undocumented and the states in which they reside their rightful representation in Congress is counter to the Constitution and makes people feel invisible and not valued as human beings."

The USCCB, along with other Catholic organizations, also filed a friend-of-the-court brief in this case, arguing that excluding those without legal documentation from the apportionment base of the census sends a message that these individuals are not equal members of the human family, which contradicts the dignity of all people and violates the U.S. Constitution and the Census Act.

New York challenged Trump's census order along with several other states, cities, counties and immigrant activist groups stressing the administration's action could leave several million people uncounted and could cause Texas, California and New Jersey to lose seats in the House of Representatives. The  number of House seats accorded to the states are based on state population numbers.

Since the census started in 1790, its practice has been to count all people living in the U.S. Currently, an estimated 11 million unauthorized immigrants are living in this country.

The point of counting everyone was raised by Justice Amy Coney Barrett, who told Acting Solicitor General Jeff Wall, who was representing the Trump administration: "A lot of the historical evidence and long-standing practice really cuts against your position."

Another factor in the day's arguments was the Census Bureau has not yet determined how many people could potentially be excluded from the census figures regarding congressional districts.

Chief Justice John Roberts expressed frustration with this at the outset and other justices similarly focused on if the case was even ready for them to take up, since the Census Bureau has not provided the president with its report yet given the bureau's extended deadline of Dec. 31.

Last year, the Supreme Court ruled 5-4 against Trump's effort to add a citizenship question to the census. Critics said the question was intended to frighten immigrants from taking part in the population count and artificially reduce population numbers in heavily Democratic areas, also to benefit Republicans.

After Trump issued his order on excluding unauthorized immigrants, the chairmen of two USCCB committees described the action as "simply wrong and divisive." They urged him to rescind it and make "efforts to protect and heal our nation and all who are living in our country."

"This is nothing but an unconstitutional and xenophobic attempt to weaponize the census to silence and scare immigrants. The immigrant community will not be silenced," tweeted Cabrini Immigrant Services of New York City July 21.

The Hope Border Institute tweeted: "The Constitution says the Census must count everyone, no exceptions." It also said on Twitter the "Trump administration's illegal attempt to politicize the #Census and do an end run around the Constitution to exclude certain folks would mean overlooking 1.6 million folks in Texas alone and the financial impact to the state would be incalculable."

Trump's memo said excluding "illegal aliens" from the 2020 census "reflects a better understanding of the Constitution and is consistent with the principles of our representative democracy."

"My administration will not support giving congressional representation to aliens who enter or remain in the country unlawfully, because doing so would create perverse incentives and undermine our system of government," the memo added.

The court has put this case on a fast track and could possibly issue a decision on it before the end of the year.