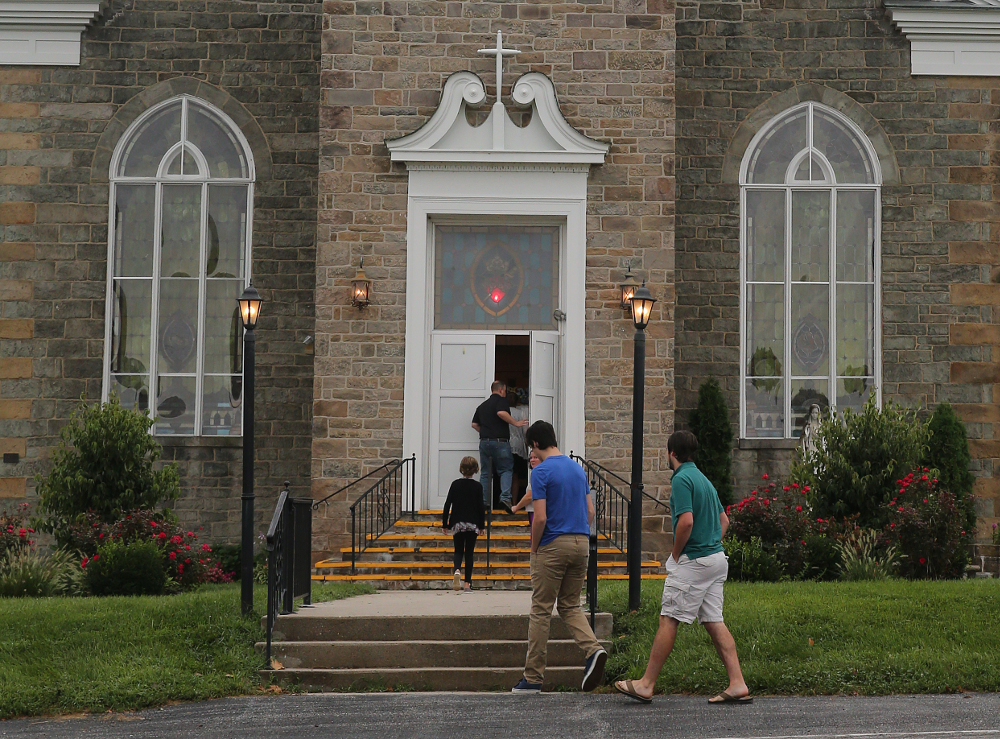 Massgoers enter Immaculate Heart of Mary Church Aug. 19 in Abbottstown, Pennsylvania, which is in the Diocese of Harrisburg. (CNS/Bob Roller)

In his response to a Pennsylvania grand jury report detailing allegations of sexual abuse of more than 1,000 children by Roman Catholic clergy, Pope Francis condemned the abuse as a crime and called the church to solidarity with its victims.

"With shame and repentance, we acknowledge as an ecclesial community that we were not where we should have been, that we did not act in a timely manner, realizing the magnitude and the gravity of the damage done to so many lives," Francis wrote in a letter published Aug. 20.

"We showed no care for the little ones; we abandoned them."

It was a statement some following the Catholic Church's clergy sexual abuse crisis called "the boldest we have heard from the Vatican" and others, "too little, too late."

What makes the letter different from other statements by Francis and previous popes is that it addresses the Pennsylvania grand jury report specifically and not just sex abuse in general, said Jesuit Fr. James Martin, editor at large of America magazine. The report found that Catholic priests had abused more than 1,000 children over 70 years and that church officials had shielded those abusers, often by transferring them to other parishes.

"The question is what specific actions will be taken, other than the letter to address the growing crisis," Martin said.

In the three-page letter addressed to the "people of God," Francis called all members of the church to pray and fast, writing, "This can awaken our conscience and arouse our solidarity and commitment to a culture of care that says 'never again' to every form of abuse."

As important, the pope denounced clericalism, or elevating clergy above other members of the church, saying, "to say 'no' to abuse is to say an emphatic 'no' to all forms of clericalism."

Read this next: Francis says Catholic Church 'abandoned' children, letting them be abused

For Natalia Imperatori-Lee, associate professor of religious studies at Manhattan College, that marked a "major shift" for the pope: "centering the pain of the victims and pointing to clericalism as a root cause."

"He talks about the sex abuse crisis as an abuse of power and a failure of church culture, not individual failures of chastity which for so long has dominated the way the crisis is discussed in the US, with our longing to point out that there are still 'good priests' and 'good bishops,'" Imperatori-Lee said in an email to Religion News Service.

Thomas Groome, the director of the Church in the 21st Century Center at Boston College, praised the pope's letter for its boldness in calling the abuse a crime — a departure from previous statements — and noting the failure of church leadership to address it.

"Now Francis has clearly cranked it up to a new level and that is the bishops themselves clearly must be investigated," Groome said.

But the letter falls short of creating structures or naming actions to ensure accountability for clergy and safety for children and other vulnerable people, he said.

Kathleen McChesney, a former FBI executive and the first director of the U.S. Bishops' Secretariat of Child and Youth Protection, said she would have preferred to see more concrete actions, though she appreciated that the pope acknowledged that efforts to implement those things have been delayed.

Since the Boston Globe's 2002 investigative report shone a light on clergy sex abuse in the Catholic Church, various groups have recommended ways survivors could obtain some sort of justice, including being recognized and heard and naming abusers — which the Pennsylvania report does, McChesney said.

Some have suggested financial compensation for victims, the immediate release of records by dioceses and religious orders, or the creation of a tribunal of church and lay leaders that can investigate and punish negligent bishops and others.

In Washington, the president of the U.S. Conference of Catholic Bishops said by opening his letter with these words of St. Paul, "If one part suffers, all parts suffer with it'," Francis "shows that he is writing to all of us as a pastor, a pastor who knows how deeply sin destroys lives."

In a statement issued late Aug. 20, Cardinal Daniel DiNardo of Galveston-Houston responded in particular to these words from the pope: "Penance and prayer will help us to open our eyes and our hearts to other people's sufferings and to overcome the thirst for power and possessions that are so often the root of those evils."

"These words must provoke action — especially by the bishops," DiNardo said. "We bishops need to — and we must — practice with all humility such prayer and penance."

The pope is inviting "all the faithful" to "join in prayer and fasting as a way to help foster conversion and genuine change of life wherever it is needed, even in the shepherds of the church. DiNardo said he too, extends that invitation to all Catholics.

Jesus' own words about the power of prayer and fasting, the cardinal said, is "a humble reminder that such acts of faith can move mountains and can even bring about true healing and conversion."

"On behalf of my brother bishops, I offer that only by confronting our own failure in the face of crimes against those we are charged to protect can the church resurrect a culture of life where the culture of death has prevailed," he added.

Over the weekend, SNAP, the Survivors Network of those Abused by Priests, also issued a statement urging survivors and supporters to demand that every state's attorney general launch similar investigations.

"Looking back to the past, no effort to beg pardon and to seek to repair the harm done will ever be sufficient," Francis wrote. "Looking ahead to the future, no effort must be spared to create a culture able to prevent such situations from happening, but also to prevent the possibility of their being covered up and perpetuated." 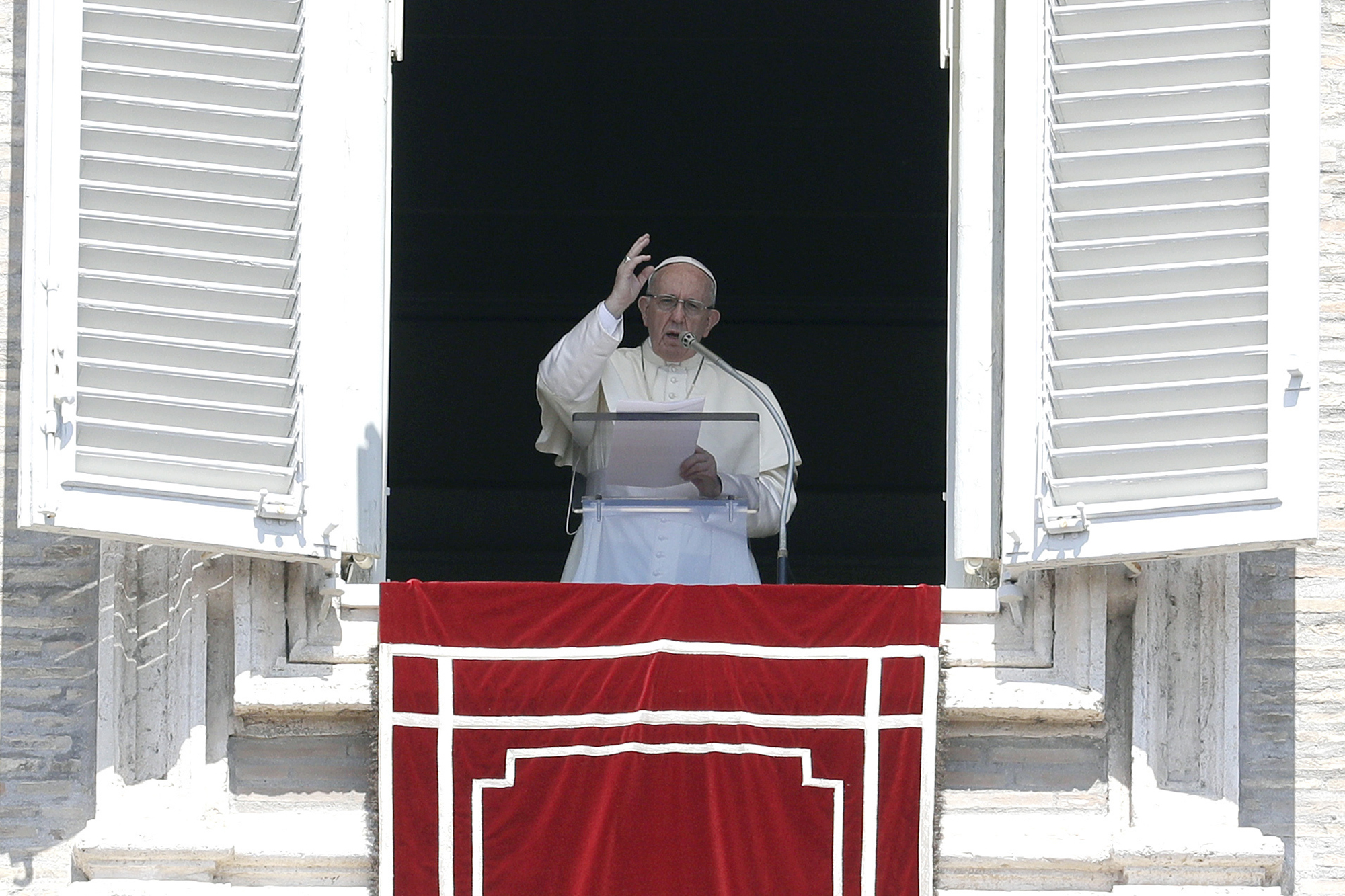 Pope Francis delivers a blessing during the Angelus noon prayer in St. Peter's Square, at the Vatican, on Aug. 19. (AP/Gregorio Borgia)

But while the pope's letter struck the "correct" tone of shame, fasting and penance, it still feels like "too little, too late" to Candida Moss, professor of theology at the University of Birmingham in the U.K.

Not only does it come a week after the grand jury report, Moss said, but also the Vatican has been aware it was coming for years.

The Vatican released the three-page letter ahead of the pope's trip to Ireland, which has been rocked by similar accusations of abuse and cover-ups going back years. So have Chile, where the pope caused controversy by insisting victims of clergy sexual abuse needed to present proof to be believed, and Australia.

As a historian, Kathleen Sprows Cummings, director of the University of Notre Dame's Cushwa Center for the Study of American Catholicism, said she knows change comes slowly and that few people give up power and authority willingly.

But, she said, "I have hope and I'm optimistic because this feels different to me. There are actions being planned. There are many people who stood up in churches yesterday and disrupted services, particularly if the priest did not preach about the crisis in his homily."