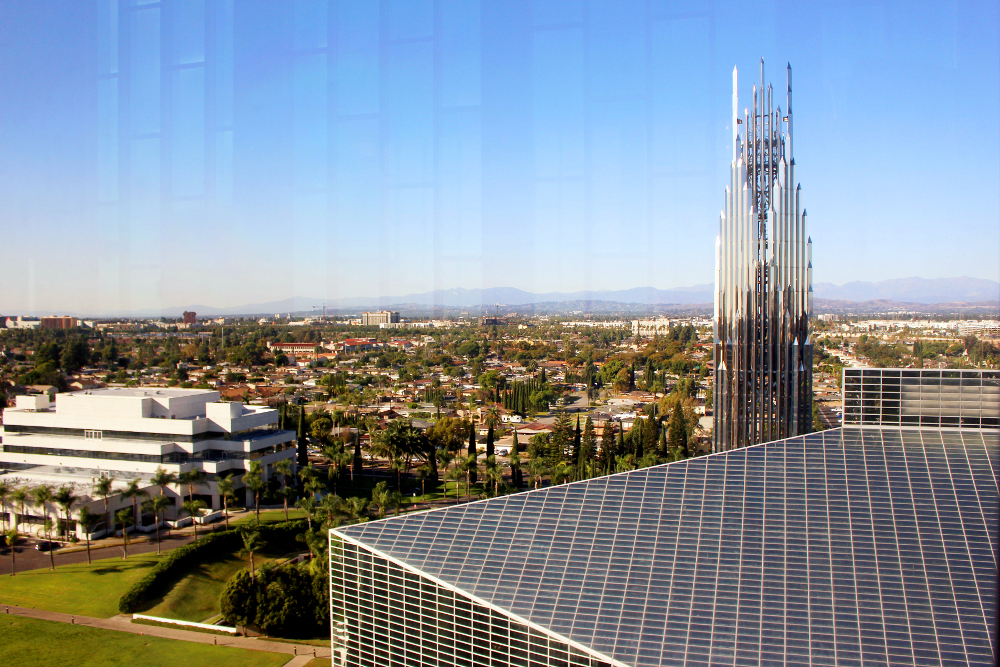 For nearly 30 years, the Rev. Robert Schuller's Crystal Cathedral was not only a religious landmark, but an architectural wonder and an embodiment of flush times in Southern California's Orange County.

Schuller, who began preaching to motorists at a drive-in movie theater in 1955, captured the ebullient positivity of midcentury America, and by the 1970s he was one of the country's top televangelists, best-known for his broadcast, "Hour of Power." The symbol of his success was Crystal Cathedral, a 128-foot-tall building designed by the cutting-edge mondernist architect Philip Johnson to be the largest glass building in the world.

From the top, you can see Disneyland. Inside seats almost 3,000. On holidays, services included live animals and acrobatic performers. It was a physical representation of the limitless hopes of the evangelical community of the time.

But the landscape began to change.

Around the turn of the 21st century, Schuller's large following of white evangelicals was aging, and the population of nonwhite residents in California was increasing. Membership and donations to Crystal Cathedral began to decline. The cathedral filed for bankruptcy in 2010.

At the same time, the Roman Catholic Church started seeing an increase in Southern California. In 1976, the Diocese of Orange consisted of about 300,000 Catholics. Today, the numbers are closer to 1.6 million, supporting 62 parishes, 41 schools, three hospitals and care centers and a number of agencies serving the poor, according to The Orange County Register.

"It's like, 'Where are all these people coming from?' They keep coming and coming," said Hank Evers, director of strategic communications for the Diocese of Orange, adding that the overall population growth of the area impacted everything from the economy to the local churches. Fittingly, then, Crystal Cathedral is almost ready to open as a church again — this time as Christ Cathedral, seat of the Diocese of Orange.

"It's the carrying on of a legacy that was begun before us," said Fr. Christopher Smith, a priest at Christ Cathedral. "And a very important sign of Christian unity." 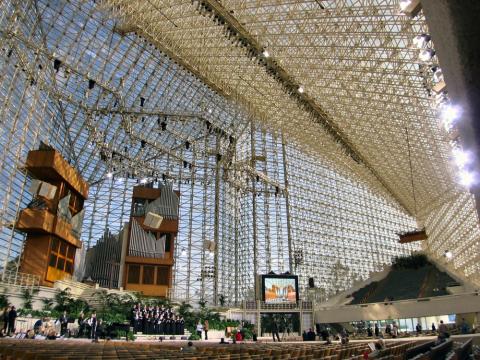 The interior of the Crystal Cathedral in 2005. The Roman Catholic Church bought the property and renamed it Christ Cathedral. (Photo by B. Kuderer/Creative Commons)

When Evers joined the Orange Catholic Foundation in fall 2011, his first project was a capital campaign aimed at raising at least $200 million to build a replacement for Holy Family Cathedral, an early 1960s parish church that was selected as the diocesan seat when the Diocese of Orange split off from Los Angeles in the 1970s.

It was that winter that the Crystal Cathedral campus was foreclosed and bidding for the entire campus, including 35 acres, seven buildings and 340,000 square feet of building space, opened up.

"The timing was unbelievable," Evers said.

Unbelievable, but far from simple.

Then came the hard part. Crystal Cathedral needed major repairs and would have to be adapted to serve as a Catholic facility. The new focus of Evers' capital campaign was raising money for its transformation. The final numbers were just too high — $25 million to $30 million over budget.

The diocese brought in Richard Heim, division CEO for Clark Construction Group and a local Catholic. By cutting back on construction costs on what Heim refers to as "back of the house" features that few worshippers would notice, the diocese was able to save millions of dollars. The total cost of acquiring and adapting the building, at a little more than $100 million, came to about half that of building a new cathedral.

"We had to strike a balance between the architectural significance, the functionality of the space, but also bring it in within the available funds," Heim said.

Some of the changes were small, such as switching from English walnut to red oak for the pews and looking at a wider range of flooring. The rehabilitation crew also ran into a lot of unexpected challenges, finding undocumented changes to the design, for instance, and having to replace underground plumbing and gas lines. The entire glass facade and roof had to be recaulked to withstand an earthquake.

"It is not the traditional stone concrete cathedrals that you would see in Europe that would last 500 years," Heim said. "We are restoring a glass cathedral in the middle of a seismic zone in California, which is a bit of a challenge."

To transform the building into a place for Catholic Mass, a substantial altar area replaced Schuller's pulpit in the middle of the predella, giving it a central place in the cathedral and a major focal point. Limestone walls have been erected to create a sense of enclosure, and 11,000 panels, called quatrefoils, hung toward the ceiling help control temperature, monitor the acoustics and create a more somber atmosphere. The Hazel Wright Organ, one of the largest church instruments in the world, named for the "Hour of Power" viewer who donated the money for it, has been moved to a side. 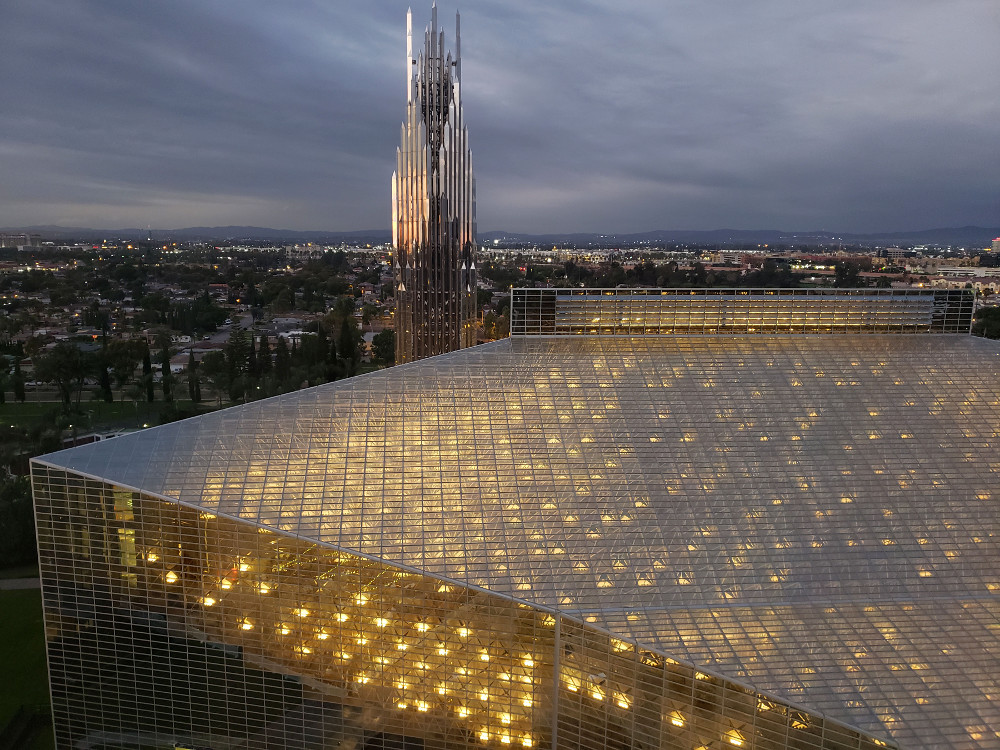 Christ Cathedral is seen during the “Lighting of the Quatrefoils” ceremony on Oct. 13, 2018, in Garden Grove, California. Architect Philip Johnson created the Crystal Cathedral in 1980, known at the time as the largest glass building in the world. Its glass enclosure was designed in response to the Rev. Robert Schuller’s request that the church be open to the “sky and the surrounding world,” according to the Diocese of Orange’s website. (Photo courtesy of Hank Evers)

Some architecture critics have taken exception to the changes, saying they diminish the openness of the Johnson design. But the diocese feels that it has done much to preserve the beauty of the cathedral, which it considers a boon to the local community, while accommodating the diocese's needs.

"I think we've done many things with both the original vision of Philip Johnson but also makes it more of a Catholic worship place," Heim said.

Smith notes the words of Dorothy Day, who emphasized the need for beautiful spaces and encouraging the rich and the poor to come inside, listen to the music, look at the art and be inspired.

"Food is part of what we need to keep alive as humans but we also need to nourish our spirits," Smith said. "Beauty is one of the things that does that." 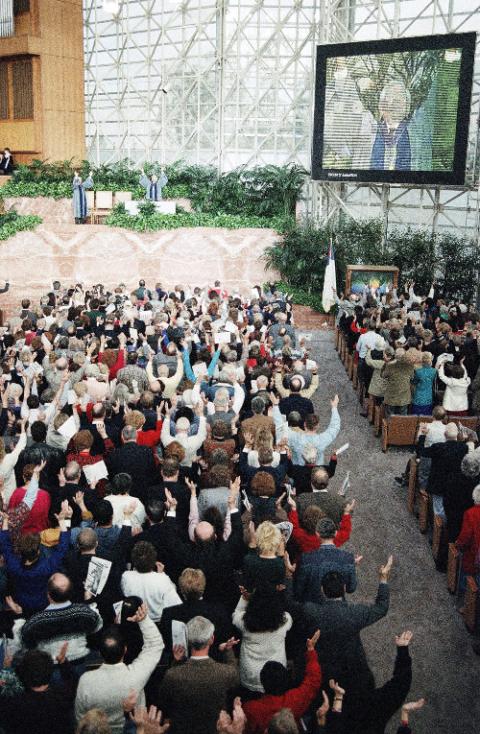 The diocese currently hosts 12 Masses in four languages every Sunday in another building on the campus. Christ Cathedral is on the path to be done with construction by spring 2019, with a dedication planned for the summer.

Smith said that's when the staff's work will really begin.

"It's more than just learning how to turn on the lights — although that'll be a project here, too," he said with a laugh. "There's a lot of logistics of things."

The staff will also be reworking the Mass schedule, likely decreasing the number of Masses each Sunday. The new building will have a much bigger capacity and Smith said he wants to make sure pews are full at each Mass to create an environment of worshipping together.

"If the closest person to you is five to 10 pews behind you, it doesn't create a very strong spirit of participating with other people," he said.

From plans for televised services to Facebook Live, Smith said he never could've imagined he'd be where he is now. When he was just 6 years old he would watch "this preacher" — Schuller, who died in 2015 — with amazement.

"We thought it was so cool to have church outside," Smith said. "Never did I imagine that all these years later, over 60 years later, I would meet this preacher." Or, he added, transform that preacher's Crystal Cathedral into Christ Cathedral — keeping a legacy and Christianity at the heart of the building.

"The building is going to continue its journey and its purpose of meeting the spiritual purpose of the people," Heim said.