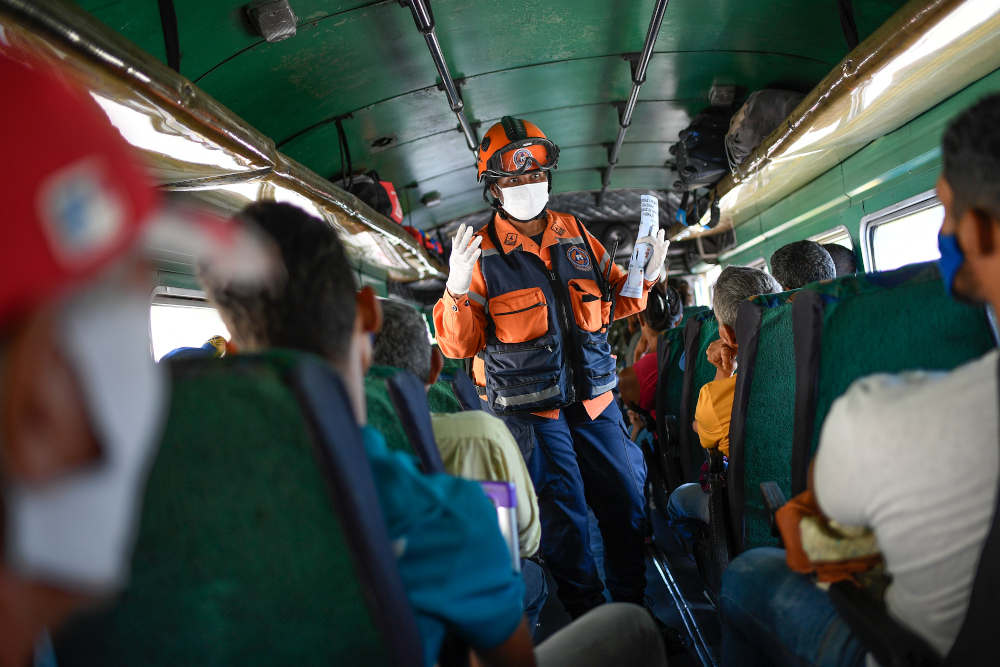 A member of the Venezuelan civil protection agency explains commuters symptoms and preventive measures for the new coronavirus in Caracas, Venezuela, Sunday, March 15, 2020. Venezuela announced quarantine measures in six states and in Caracas. The vast majority of people recover from the new virus. (AP/Matias Delacroix)

Meeting with friends, dining out, worshiping and other daily routines have nearly halted as nations take drastic steps to try to stop the coronavirus pandemic.

Religious leaders gave sermons to empty pews or to the faithful watching online March 15 after public worship was curtailed in many places. The Al-Aqsa Mosque in Jerusalem's Old City was being closed indefinitely, and the Vatican closed off next month's Holy Week services to the public. Still, the 83-year-old Pope Francis ventured out of the Vatican to visit two churches in Rome to pray for the sick.

In the United States, health officials recommended a limit to groups of 50 or more people and a government expert said a 14-day national shutdown may be needed. Americans returning from abroad encountered chaotic airport health screenings and closed-down communities.

In a sign of how much the pandemic has grown, China now accounts for less than half of the world's 168,000 cases, according to a tally by Johns Hopkins University.

The country where the virus was first detected in December had long been the epicenter of the COVID-19 illness, but a shutdown of public gatherings and a quarantine of the hardest-hit central region has steadied its caseload as the virus spreads rapidly elsewhere. Most of the world's 77,000 recovered patients are in China.

Though China still has the most infections, a dozen other countries have more than 1,000 cases, mostly in Europe.

On the first day of Spain's quarantine, long lines formed for food as police patrolled. Soldiers and police sealed off the Philippines' densely populated capital, Manila, from most domestic travelers. Austria planned to limit movement, and Lebanon was put on lockdown, closing down Beirut's famed seaside corniche.

Ireland ordered all pubs and bars to close for two weeks — including on March 17, St. Patrick's Day — and urged people not even to hold house parties. Two pub industry groups had warned of the "real difficulty" in keeping people apart in the country's famous watering holes.

Italy welcomed a Chinese medical team to help it cope with its patient workload as health officials warn of what will come as the virus hits elsewhere.

"It's not a wave. It's a tsunami," said Dr. Roberto Rona, who's in charge of intensive care at the Monza hospital.

For most people, the coronavirus causes only mild or moderate symptoms, such as fever and cough, and those with mild illness recover in about two weeks. But severe illness including pneumonia can occur, especially in the elderly and people with existing health problems, and recovery could take six weeks in such cases.

The needs to stop the virus from spreading to the most vulnerable people and to not overwhelm health care systems with sick patients are pushing the urgent calls for people to avoid public crowds or just stay home.

People should go out "only alone or with the people who live in their apartment," said Austrian Chancellor Sebastian Kurz, whose country has 800 infections.

That was echoed by one of America's top infectious disease experts. 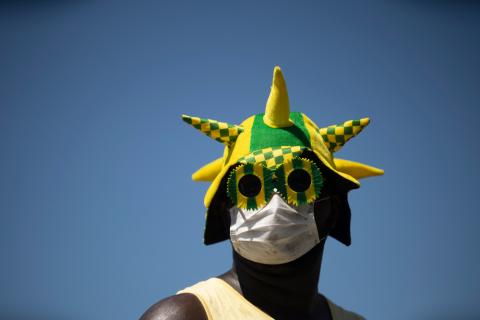 A man wears a mask during a rally supporting Brazil's President Jair Bolsonaro on Copacabana beach, Rio de Janeiro, Brazil, Sunday, March 15, 2020. Thousands took to the streets on Sunday to demonstrate in favor of Bolsonaro, challenging in some states the ban on agglomerations due to coronavirus and ignoring his suggestion to postpone the acts. (AP/Silvia Izquierdo)

"I think Americans should be prepared that they are going to have to hunker down significantly more than we as a country are doing,'' Dr. Anthony Fauci of the National Institutes of Health told NBC's "Meet the Press.''

Governors in California, Illinois and Ohio told all bars and restaurants to close or reduce their number of customers. New York City will shutter the nation's largest public school system as early as March 17, sending over 1.1 million children home.

With fears increasing that the pandemic will depress U.S. economic growth, the Federal Reserve took emergency action by slashing its benchmark interest rate to near zero and deciding to buy $700 billion in Treasury and mortgage bonds.

"This is unacceptable, counterproductive and exactly the opposite of what we need to do to prevent #COVID19," Illinois Sen. Tammy Duckworth tweeted.

Italy banned passengers from taking ferries to Sardinia and halted overnight train trips, which many in the north had used to reach homes and families in the south.

He then walked to another church with a crucifix that in 1522 was carried in a procession during a plague afflicting Rome. In his prayer, Francis has ''invoked the end of the pandemia that has stricken Italy and the world, implored healing for the many sick, recalled the many victims of these days" and asked for consolation for their family and friends.

During his 90-minute foray, the pontiff and his security detail were nearly the only people around.

The Vatican will all Holy Week ceremonies to the public starting with Palm Sunday on April 5. Holy Week services usually draw tens of thousands to Rome but Italian tourism has vanished.

Spain was under lockdown amid a two-week state of emergency.

"From now, we enter into a new phase," said Prime Minister Pedro Sánchez, whose wife tested positive. "We won't hesitate in doing what we need must to beat the virus. We are putting health first."

In Barcelona, there were long lines to buy bread. Police patrolled parks and told people who were not walking their dogs to go home. The Las Ramblas promenade was eerily empty.

Even as social life largely halted, some attempts at keeping up public life persisted.

France went ahead March 15 with nationwide elections to choose mayors and other local leaders. A 1-meter (yard) gap between people was mandated, as well as soap or sanitizing gel and disinfectant wipes for voting machines. 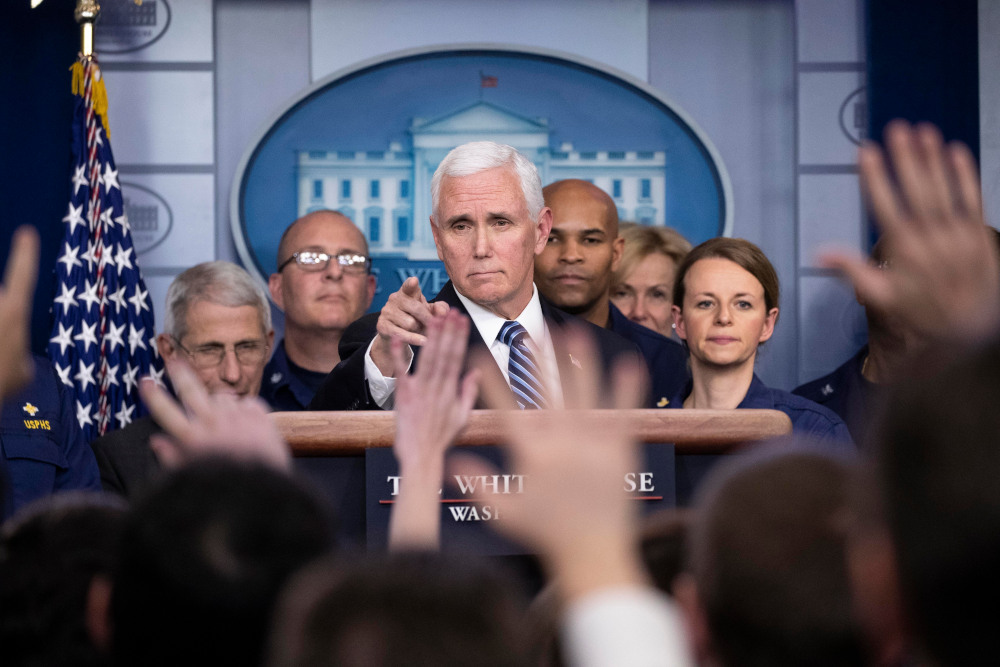 Vice President Mike Pence points to a question as he speaks during a briefing about the coronavirus in the James Brady Press Briefing Room of the White House, Sunday, March 15, 2020, in Washington. (AP/Alex Brandon)

Germany will partially close its borders with France, Switzerland, Austria, Luxembourg and Denmark on March 16, and Interior Minister Horst Seehofer said people will no longer be allowed to cross those borders without a valid reason, such as for work.

Britain, which has not yet restricted everyday activities, said it plans to set out emergency powers this week, including potentially requiring people over 70 to self-isolate for up to four months and banning mass gatherings.

"We will do the right thing at the right time," Health Secretary Matt Hancock told the BBC.

Puerto Rico ordered nearly all businesses to close for next two weeks and set a nighttime curfew following confirmation of a fifth case.

With the virus having reached 25 of Africa's 54 countries, sweeping restrictions were announced. Kenya is banning travelers from countries with infections and closing all schools for three weeks.

Dalia Samhouri, a regional official with the World Health Organization, said both Iran and Egypt, two of the most populous countries in the Mideast, were likely underreporting cases because infected people can still show no visible symptoms. Iran says it has nearly 14,000 virus cases and 724 deaths, while Egypt has reported 110 cases, including two fatalities.

Testing for the illness has also varied from country to country and community to community. The U.S. was prioritizing medical workers and senior citizens with symptoms, in order to avoid paralyzing the health care system.

"It's important the tests are available for the people who are most in need and our health care workers and first responders that are helping and supporting them," Vice President Mike Pence told reporters at the White House.