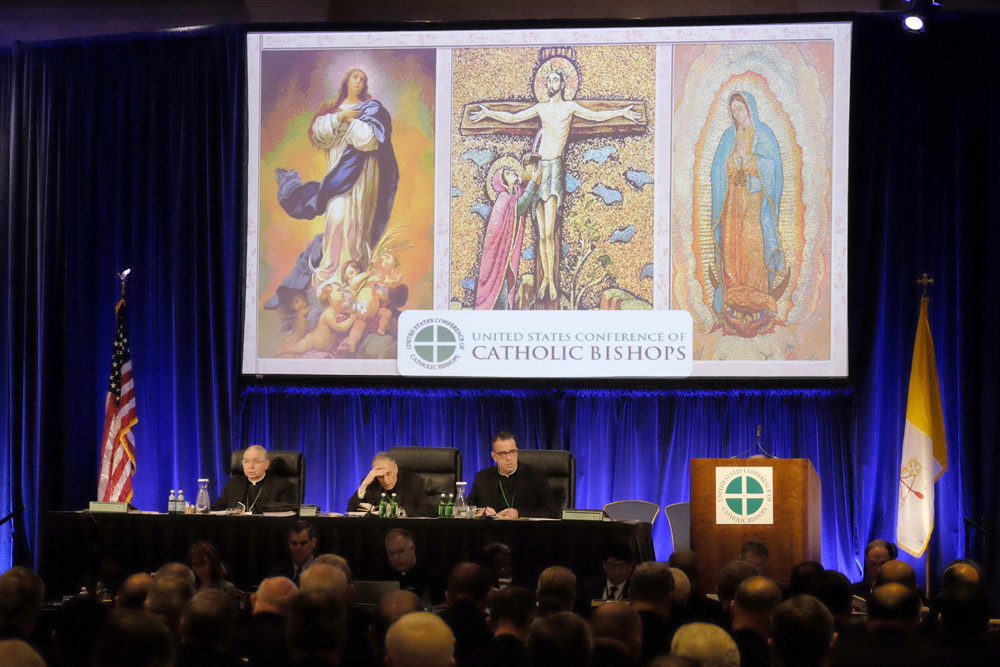 "Even in ordinary times there are very few of us who do not see through a glass darkly," said Theodore Roosevelt in 1910. "And when the glass is clouded by the murk of furious popular passion, the vision of the best and bravest is dimmed."

No one would call the U.S. bishops brave, and while some of them I consider among the best, in their public debates, no one gave evidence of undimmed sight. No one explained, as Cathleen Kaveny did at a briefing Nov. 11 that NCR co-sponsored with Fordham's Center on Religion and Culture, that while in 2002, the problem was framed as addressing aberrational behavior by a few sick clergy, now, in 2018, the problem is different. Now, the question many of us have is whether or not the sexual abuse of children and others is endemic, even constitutive, of the clerical culture as it currently exists.

Massimo Faggioli, at the same event, looked at the ecclesiological advances in the 20th century, and some of the unintended and unfortunate consequences of those achievements. He noted that the Second Vatican Council made clear that the bishops are not employees of the Vatican, but bishops, sacramentally set apart for governance and leadership of a local church. Therefore, it is not such an easy thing to simply fire them when they mess up. Faggioli said that if the 20th century was the century of ecclesiology, now we face issues of ecclesiodicy: How can there even be a church of Jesus Christ if this is the kind of mess it falls into?

None of this manifested itself profoundly in the proposals the conference planned to adopt this week, until the Vatican asked that they hold off until a meeting next February of presidents of all the world's episcopal conferences to address the issue of clergy sex abuse and how it has been covered up. It is clear the bishops are still focused on the institution, not the mission. They are, as pragmatic Americans, keen to focus on policies and procedures and not so much on the need for a conversion of the clerical culture that produced them and which they now sustain in ways large and small.

There are other technical problems with the proposals. The "Standards of Episcopal Conduct" states: "Sins against the Sixth Commandment strike at the very dignity of a person and have absolutely no place in the life of a minister, most especially one who is a bishop." The "Sixth Commandment" covers a lot of moral turf. Even Jimmy Carter had lust in his heart. The "Special Commission for Review of Complaints Against Bishops for Violations of the Standards of Episcopal Conduct" explained in detail how the membership of the commission would be constituted, but then referred to a board of directors in selecting members of the commission and gave no details about the composition of the board of directors.

As I wrote yesterday, I suspect strongly that Pope Francis decided to hold up action at this point precisely because the proposals take great pains and propose clear means for cleaning the outside of the cup, but not the inside. Indeed, in the morning session, the bishops engaged in mere shadow boxing. Bishop Earl Boyea of Lansing, Michigan, moved for the bishops to discuss a request that the Holy See release the documents pertaining to McCarrick. Bishop Joseph Strickland of Tyler, Texas, gave a long-winded comment about the salvation of souls that might have led to a fruitful discussion if he had not been so disgustingly complicit in the release of the Viganò testimony in August.

The bishops heard from Francesco Cesareo, who leads the National Review Board. He said, "Archbishop Viganò's allegations must be addressed. No stone must remain unturned. Ignoring these allegations will leave a cloud of doubt over the church, as questions will linger." Really? All the allegations? I can assure Cesareo from my certain knowledge that some of Viganò's allegations were pure bunk. In fact, Viganò said, among other things, "In any case, what is certain is that Pope Benedict imposed the above canonical sanctions on McCarrick and that they were communicated to him by the Apostolic Nuncio to the United States, Pietro Sambi" [emphasis in original]. Viganò has since walked back that claim when it became obvious no such canonical sanctions had been applied. He also stated that Cardinal Edwin O'Brien, who was once the archbishop here in Baltimore, is part of a "homosexual current" in the Vatican, among others. Does Cesareo really think the bishops should investigate that claim?

I suspect the bishops did not want to be seen confronting one of the few laypeople in the room, but someone needs to pose this question so I shall: I have sat here every November listening to Cesareo and his predecessors give a report on the diocesan audits of compliance with the Charter for the Protection of Children and Young People. Now, Cesareo admits the audits are inadequate. Was it not apparent before? He cited a recent story in the Boston Globe and the Philadelphia Inquirer, that brought together an overview of the bishops' handling and mishandling of clergy sex abuse. Auxiliary Bishop Mark O'Connell of Boston asked if the review board had compared the claims in those stories with the audits in recent years. Cesareo said they had not. Chicago Cardinal Blase Cupich asked if he had compared the Pennsylvania grand jury report with the audits and Cesareo said they were working on it.

I know we are all supposed to be bending our knee at the idea of lay oversight, but frankly, if Cesareo's inability to see this mess coming is any indication, I am suspect that lay scrutiny is insufficient.

Mostly, today's session was just shadow boxing. Conservative bishops did not come out and say they wanted to focus on homosexuality as a cause of clergy sex abuse, but they hinted at it. Bishops who support Pope Francis did not defend the pope's decision to delay a vote on these proposals. The U.S. bishops are, as a body, not prominent in the Pope Francis fan club, so perhaps they have not been digesting his calls to reform. But, mindful of the Lord's words in the Gospel of Matthew 23:25, they should now consider that while their proposals were well designed to clean the outside of the cup, it is the inside that needs cleaning.