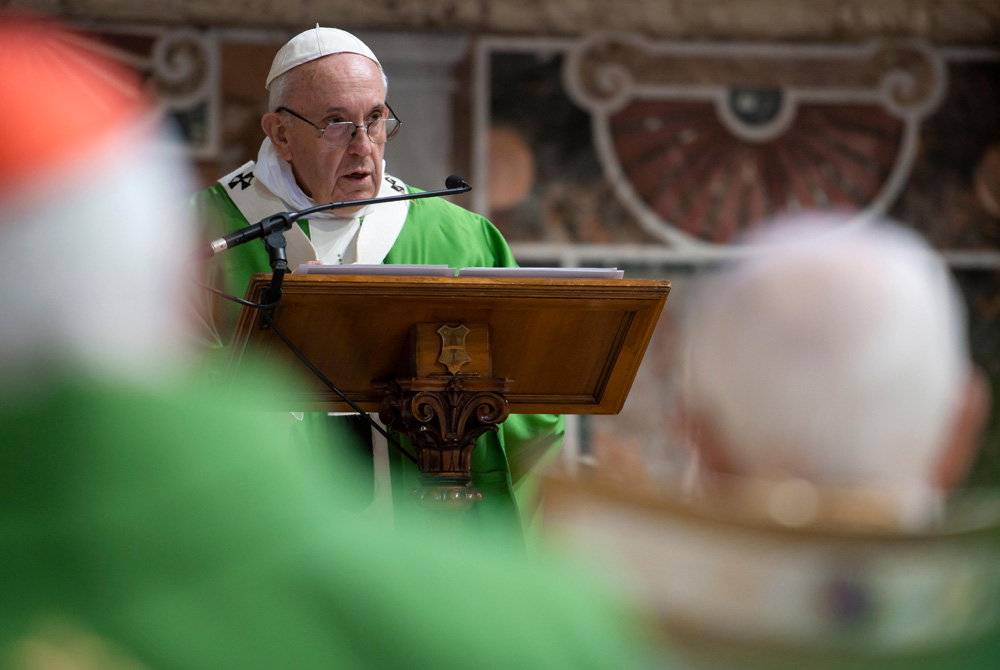 Pope Francis speaks at the conclusion of a Mass on the final day of the meeting on the protection of minors in the church at the Vatican Feb. 24. (CNS/Vatican Media)

Checking out how conservative U.S. Catholics reacted to the Vatican sex abuse summit would be funny if it were not so pitiful. After so many years when they criticized NCR for covering the story (amongst other signs of indifference to the Gospel), now they have decided to get busy. They sense a vulnerability in Pope Francis on this issue, saddled as he is with a curia that has been perfecting the art of sabotaging reform for centuries. They intend to ride this train if they can. But, their commentary betrays their biases more than anything else.

There is Tim Busch, founder of the Napa Institute, board member of EWTN, funder of the business school at Catholic University that bears his name, taking to the pages of The Wall Street Journal to suggest the laity, the faithful laity, will stand up to the scourge of clergy sex abuse no matter the cost because the bishops have failed to do so. Chutzpah. This is the man who hired disgraced former Archbishop of St. Paul and Minneapolis John Nienstedt as a kind of house chaplain for his Napa Institute and did not blink at Nienstedt's coddling of a notorious abuser of children among other things. Busch only sacked Nienstedt last summer when the incongruity became too conspicuous to ignore any longer. Say, has Busch ever called for the public release of the document compiled by investigators into Nienstedt's behavior? Did I miss that?

This episode of "The Vortex" referred to the meeting as a "Summit of Lies," and called the organizers "liars and are deflecting from the real story. They are all part of the homosexual current identified by Archbishop Viganò." I note in passing that when I clicked on the link, I got an ad for President Trump's reelection campaign. Only an auto-da-fé featuring some gay clergy would have satisfied them.

LifeSiteNews made a splash at the press conferences during the summit. You can see the embedded video of one session here. Their reporter asked, in a rambling speech pretending to be a question, about the connection between gays and sex abuse and Archbishop Charles Scicluna was succinct in his reply that the two have nothing to do with one another. LifeSite's reports before, during and after the summit all focus on the issue of homosexuality.

Catholic University theology professor Chad Pecknold wrote one of the most foolish columns in advance of the summit, as I noted last week. I have not seen a column by him since, but his Twitter feed is chock full of homophobia. He retweeted this from Edward Pentin, the National Catholic Register's Rome correspondent, in which Pentin quotes an African bishop complaining that "Homosexual issue hasn't been mentioned at all in order to stay focused." And, Pecknold retweeted a similar complaint from J.D. Flynn, adding the comment, "McCarrick was just laicized for abusing male minors and adults. The impression is given that reality is not being faced."

For this crowd, the case of Theodore McCarrick is the perfect storm, combining predatory behavior towards minors and young men, the ecclesial equivalent of what the Jussie Smollett story is for Fox News, a dreadful, regrettable incident that they will use to beat their drums for years. But, stay tuned. McCarrick faced a tribunal at the Congregation for the Doctrine of the Faith, not a jury of his peers. Yet a jury of Cardinal George Pell's peers did find him guilty of abusing male minors. We do not lightly ignore a jury verdict, do we? I have been told by people who do not like Pell that they have serious questions about the trial and the cardinal has announced he intends to appeal. I hope the truth will be vindicated whatever that is. But, how is his case different from McCarrick's at this moment, and with the evidence we have? Look for contortions worthy of Cirque du Soleil trying to square that circle in the days ahead.

The biased analysis was not just among the lunatic fringe. At First Things, a look at the summit was published under the pseudonym "Xavier Rynne II" but the author is no Fr. Francis X. Murphy, the writer whose dispatches from the Second Vatican Council in The New Yorker were published under that name. I do not know for sure if the author is George Weigel but I suspect so because the article touched so many of his hobby horses. And who else would include so many references to the writings of St. Pope John Paul II without acknowledging the degree to which his papacy is responsible for the years of covering up sex abuse, if not Weigel?

This new, faux Rynne wrote, "The meeting's sharp focus on 'protection of minors,' essential as that goal is, mitigated a thorough wrestling with the more comprehensive scandal of clerical sexual misbehavior, of which the abuse of the young is one (albeit the most gruesome) expression." The reason for the focus on the abuse of minors is because it is a sin and a crime. Some other forms of sex abuse might also be criminal, such as sexual harassment of a subordinate, but such abuses are handled very differently in different countries' legal regimes. And, of course, there is human frailty, which can be sinful and more easily forgiven, unless one is a Jansenist who has read too much "Theology of the Body."

The article also referenced "the relationship of doctrinal dissent to the abuse crisis" a consideration which could be sane and important or could be sinister and dangerous. Given the rest of the article, I incline towards the latter. One of the most striking aspects of the clergy sex abuse mess is the degree to which the scourge and the cover-up have been indifferent to ideological complexion, involving both liberal "dissenters" and conservative fundamentalists. Similarly, I am made nervous by calls for increased involvement by the laity when it comes so strongly from the right-wing American bleachers. Lastly, does anyone else think it remarkable that First Things would publish anything on the subject of clergy sex abuse without first apologizing for the stance of their founding editor?

These commentaries got me thinking: What would the summit have looked like if it had been organized by U.S. conservative churchmen and laity? Professor Pecknold would offer a presentation on how ad orientem worship might have stemmed clergy sex abuse. Weigel could explain how St. Pope John Paul's teaching, and his actions, were consistent on this issue and how he daringly pointed the way forward. He might be joined by Cardinal Stanislaw Dziwisz. J.D. Flynn could explain the origins of homosexuality. Cardinal Raymond Burke might explain how the Charter for the Protection of Children and Young People should have always applied to bishops, even though he was the one who told the drafting committee in 2002 that it could not. Tim Busch could explain how restructuring the church so that it has a corporate board of rich, conservative, "faithful" Catholics would clean up the mess. I wonder if such a proceeding would convince anyone except themselves that the Catholic Church was getting serious about preventing abuse?