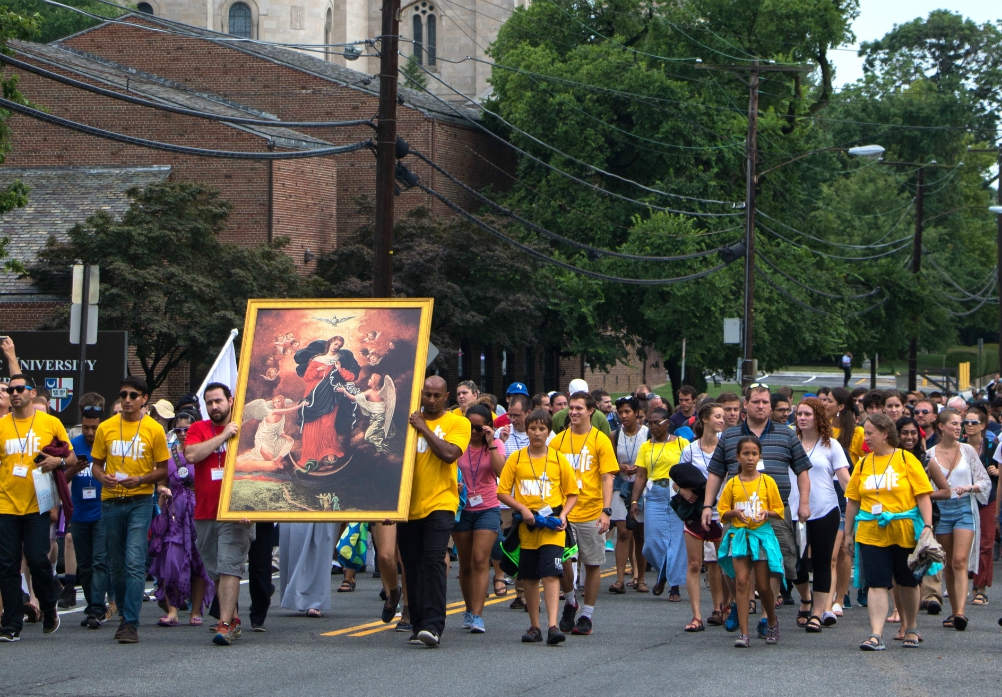 World Youth Day Unite participants march near Washington's Basilica of the National Shrine of the Immaculate Conception July 22, 2017. More than 1,300 young adults from across the country gathered for the event designed to bring young people together to celebrate their faith in years when there is no global World Youth Day. (CNS/Archdiocese of Washington/Courtesy of Daphne Stubbolo)

Prognostications are for necromancers and fools. I am not a necromancer. Nonetheless, let's look at what are sure to be the most important stories and dynamics in the life of the Catholic Church in the coming year.

At the top of my list of things to keep an eye on are the appointments of auxiliary bishops. Why auxiliaries? In the first place, very few ordinaries will hit 75 years of age this year and therefore be required to submit their resignation to the pope. I count only six dioceses with bishops who "age out" in 2018: Des Moines, Iowa; Fresno, California; Syracuse, New York; Columbus, Ohio; Wheeling-Charleston, West Virginia; and Sioux Falls, South Dakota. A couple of bishops also aged out in the last months of 2017 and have already submitted their resignation.

Secondly, look at who is retiring. Bishop Richard Pates in Des Moines has been a leader on climate change — at a time when "Laudato Si', on Care for Our Common Home" was not mentioned even once at the most recent meeting of the U.S. Conference of Catholic Bishops. Bishop Stephen Blaire of Stockton, California, hit 75 last month: He has been a champion of social justice issues throughout his tenure. Bishop Michael Bransfield of Wheeling-Charleston wrote two of the best pastoral letters I have encountered, one on poverty and another on the elderly. So even if Pope Francis replaces these men with pastoral bishops, there is not going to be a shift in the balance of the U.S. bishops' conference.

On the other hand, many dioceses and archdioceses are due for auxiliary bishops. In Chicago, two auxiliaries, Bishops Francis Kane and George Rassas, turned 75 in the past year. In Washington, Auxiliary Bishop Barry Knestout was just named bishop of Richmond, Virigina. San Diego received one auxiliary last year and is hoping for another, and the Dallas Diocese received one auxiliary in 2016 but they also lost an auxiliary to Lafayette, Louisiana. Auxiliary Bishop Christie Macaluso of Hartford, Connecticut, just resigned a couple of years ahead of schedule.

In short, the nuncio and the Congregation for Bishops can name 20 or more auxiliary bishops this coming year and that would tip the balance at the U.S. bishops' meetings toward those advocating a path more in line with Pope Francis.

I mentioned there was not one mention of Laudato Si' at last November's meeting of bishops. I expect that in 2018 we will find some bishops working to implement the vision of environmental protection outlined in that encyclical with greater vigor.

This may involve the development of curricula for Catholic schools and seminaries. It may mean recognizing that the church can approach this issue not only as an advocate in the public square but as a large property owner, and lead by example.

Lastly, I expect that as hurricanes made more ferocious because of the warming of the oceans continue to cause devastation in the Caribbean and Central America, the U.S. bishops will work to bring a more sustainable power grid to these regions. Such a power grid would both be less susceptible to storms and make energy more affordable for the poor people of these countries.

These varied efforts to implement Laudato Si' will not track with any ideological predilections of the bishops, but we can expect well-funded groups of laity to continue to deny climate change.

Climate change denialism leads to another story to watch in 2018: the scandal that is the Catholic University of America. A little more than 30 years ago, Fr. Charles Curran was forced out of his position as a professor of theology at the school. I had Curran as a professor and can vouchsafe that his was the most difficult class I had in two years of seminary. He made it very clear what the church teaching was on various controverted issues, and also why and how he dissented from that teaching. To be clear: Curran may have differed from the church but his views were rooted in the Catholic intellectual tradition.

The Busch business school at the university has become a champion of libertarian economic ideas that are antithetical to Catholic social doctrine. It is not even a close call. Anthony Annett at Commonweal demonstrated just how outrageous some of its ideas are, and here at NCR, Tom Roberts reported on the self-importance of Napa Institute co-founder Timothy Busch, for whom the school is named. His hubris was on display at a recent conference, organized to honor Charles Koch, at the school:

Really? I commend to Busch and the students at the business school that bears his name some study of the theology of the people that not only inspires the Holy Father but is compatible with a rigorously Christian anthropology, which cannot be said for the vile, heretical nonsense that emerges from every Napa Institute event. The future of Catholic University is in grave danger if Busch's vision remains the de facto stance of the school's board.

The bishops not only need to reclaim their own university, they need to seriously invest in the Catholic News Service, which they own. When EWTN bought the National Catholic Register, and then announced a partnership with Catholic News Agency, the bishops had to recognize that none of these three organizations answer to them, yet with their combined reach and seemingly endless resources of funds, this conservative conglomerate, which traffics regularly in dissent from the magisterium of Francis, could become the dominant means of communication within the Catholic Church in this country.

Finally, there is the Synod of Bishops in the autumn, called to focus on young people and their vocations.

It will be interesting to see whom the pope names to the synod: Two years ago, he named then-Archbishop Blase Cupich of Chicago and Bishop George Murry of Youngstown, Ohio, to the Synod of Bishops on the family. Cupich, who reads German, played a critical role bridging the German- and English-speaking working groups.

The U.S. bishops, in November 2017, selected the president and vice president of the conference, Cardinal Daniel DiNardo of Galveston-Houston and Archbishop José Gomez of Los Angeles, to be delegates to the synod on young people, as was expected. But they also selected Philadelphia Archbishop Charles Chaput and Los Angeles Auxiliary Bishop Robert Barron. Chaput is on the council for the synod, so his selection makes sense, and Barron is very good at his form of apologetics, if you care for that sort of thing. Not sure why they passed over Bishop Frank Caggiano of Bridgeport, Connecticut, who is the conference's liaison to World Youth Day.

My prediction: The bishops selected by the conference for the 2018 synod on young people will, as at the last synod, be on the sidelines, and Francis will appoint a couple of American prelates who are open to less American-centric views and an understanding of evangelization as something more than apologetics. What will come from the synod, nobody knows.

Looking ahead to 2018, there is one more prediction that is entirely safe: As long as we have a pope who likes surprises, we can expect to see some surprises in the stateside church as well. Buckle up, as long as Francis is pope.