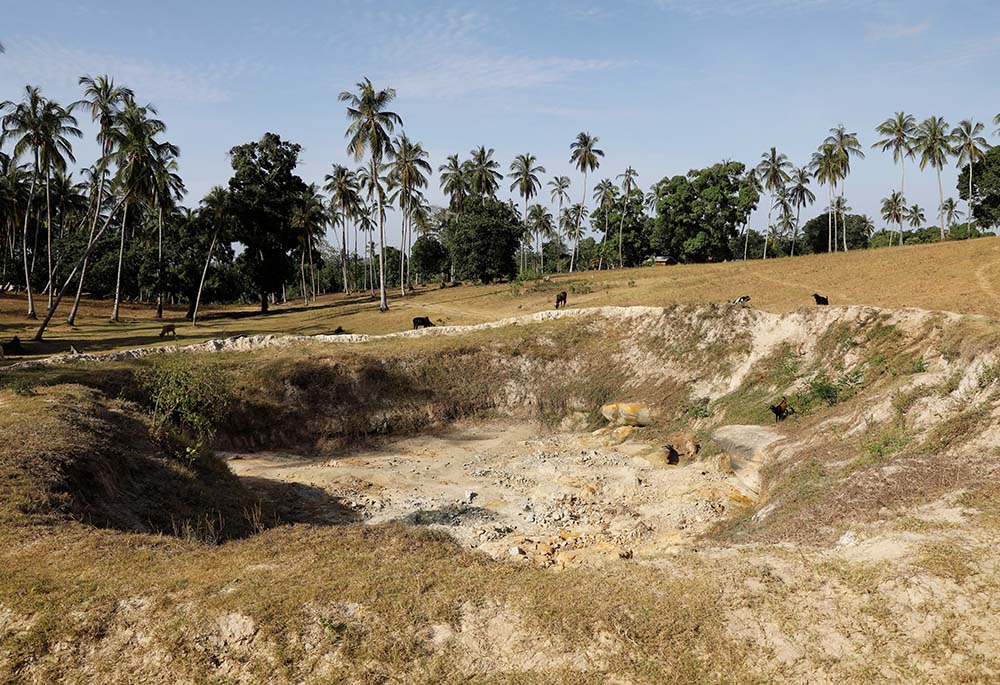 A dried-up water hole is seen in Kilifi, Kenya, on Feb. 16. (CNS/Reuters/Baz Ratner)

As bishops in East Africa meet this week to discuss ways to implement Pope Francis' landmark encyclical on ecology, Catholic youth in the region offered up their own suggestions, pressing the prelates to prioritize renewable energy and green practices in church facilities, support a major reforestation effort on the continent, and join the Vatican's flagship ecological initiative as part of boosting environmental action and education churchwide.

The youth demands were delivered to bishops meeting as part of the 20th plenary of the Association of Member Episcopal Conferences of Eastern Africa, a regional grouping of bishops from Eritrea, Ethiopia, Kenya, Malawi, South Sudan, Sudan, Tanzania, Uganda and Zambia.

The nine-day meeting (July 10-18), held in Dar Es Salaam, Tanzania, is focused on the theme "environmental impact on integral human development" through the lens of Francis' 2015 encyclical "Laudato Si', on Care for Our Common Home." The bishops are expected to develop guidelines for the Catholic Church in East Africa at all levels to respond to environmental challenges like climate change and biodiversity loss facing the region.

"This is an urgent challenge as environmental degradation and its impact threatens the very existence of humanity that Jesus came to save," Bishop Charles Kasonde of Solwezi, Zambia, chairman of the East African bishops' association, said during an outdoor Mass that opened the plenary on Sunday at Benjamin Mkapa Stadium.

Ahead of the bishops' meeting, the Catholic Youth Network for Environmental Sustainability in Africa held its own assembly July 8-9, where participants compiled a statement addressing church leaders and proposing 13 steps for the church to take. Thirty youth delegates took part in the gathering, in which they discussed Laudato Si' and their own responses to it, as well as the challenges the church has faced in doing the same. Among them: a lack of support from pastors and lack of resources for young people, particularly a shortage of jobs.

The Catholic youth said that climate change, biodiversity loss and pollution are major issues facing the planet but also disproportionately impact children and young people. According to UNICEF's Children's Climate Risk Index, as many as 1 billion children worldwide — or half of all children — are at "extremely high risk" of the impacts of climate change, a risk especially concentrated on the African continent.

"Children and Youth bear the greatest burden of climate change and are calling everyone, especially the decision makers, to act with the urgency required to ensure not only today's children and Youth but also the future generations inherit a liveable planet," the young African Catholics said in their statement.

The threat of climate change is already evident, the youth added. The last eight years have been the hottest on record, 19 of the warmest years have occurred since 2000, and the planet has already heated approximately 1.1 degrees Celsius since the late 19th century. At current rates, the world will heat 1.5 C — the more ambitious temperature limit set by nations under the Paris Agreement — sometime in the next decade, scientists say. And biodiversity loss is accelerating at historic rates, with as many as 1 million species facing extinction by the end of the century.

Signs of climate impacts are across Africa. Major floods killed hundreds of people in South Africa in the spring, while prolonged droughts have afflicted the horn of Africa. Destructive cyclones have struck in places like Malawi and Zambia, while coastal cities like Dar Es Salaam face rising sea levels. The climate disasters have been compounded by the coronavirus pandemic and the war in Ukraine, which together have contributed to a growing humanitarian hunger crisis in African countries heavily reliant on wheat from Ukraine and Russia.

"These are all critical warning signs of an urgent and undeniable truth: Our planet is sick," the Catholic youth said to their bishops, calling their theme selection necessary and timely.

Allen Ottaro, executive director of the Catholic Youth Network for Environmental Sustainability in Africa, told EarthBeat that the environmental and economic realities in East Africa make the message of Laudato Si' increasingly relevant "as it speaks to both the cry of the Earth and the cry of the poor."

"The focus on Laudato Si' implementation [at the plenary] is therefore significant, because it will contribute to the urgent action that is needed to address the ecological crisis," he said. 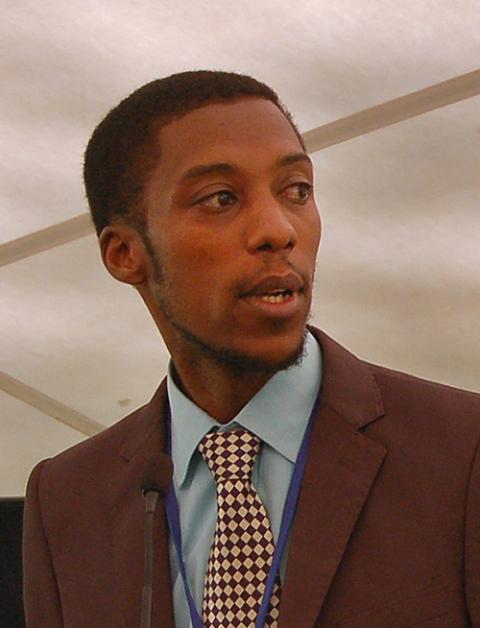 In the face of "this grim picture of our common home," the young Catholics in their statement said they remained hopeful, in part because of Francis, "who has spoken out so powerfully about the climate emergency and more especially in Laudato Si', and who has encouraged young people to drive a movement to make a difference."

In that spirit, the young Catholics said, they offered church leaders their recommendations for the church in East Africa to act on the teachings in Laudato Si', citing a passage from the encyclical for each of their 13 requests.

They urged bishops to adopt renewable energy, including solar panels, in church institutions as a means to reduce consumption of fossil fuels, the major driver of climate change. They also asked for church gatherings to ditch single-use plastics and replace them with reusable materials, and to encourage more recycling, less waste and a rejection of consumerism.

They also proposed that the bishops sign onto the Vatican's Laudato Si' Action Platform, a global initiative inviting Catholic institutions at all levels to commit to seven-year plans to complete a series of actions related to sustainability and integral ecology. In addition, the youth requested the bishops find ways to work closely with the African Great Green Wall initiative — a major land restoration effort that has sought to plant tens of millions of trees across the continent in Sahel region to halt expansion of the Saharan Desert, including in Sudan, Djibouti, Ethiopia and Eritrea.

Within the church, the youth requested greater environmental education in church formation programs for clergy and laypeople alike, for environmental teachings to be included in homilies and catechism classes, and for bishops to "lead by example" by taking part in tree plantings and environmental cleanups.

They also proposed that bishops create "Laudato Si' clubs," along with a Laudato Si' fund, to lead community projects, including during the Season of Creation (Sept. 1-Oct. 4) and on an established Laudato Si' Day. Along with that, they encouraged the bishops to create intergenerational environmental committees at diocesan and regional levels to carry out conservation efforts and to empower youth and women in leadership roles.

"We are calling on our Bishops to instill the spirit of care for creation to the members of the church and to actively participate in Laudato Si' implementation," the Catholic youth statement said.

Ottaro told EarthBeat that young Catholics felt the statement was an important way for them to show their commitment to act concretely in living out Laudato Si' and to demonstrate intergenerational dialogue and action.

"While they are the generation that will bear the heaviest burden of the ecological crisis, they are also best placed to accelerate actions that will help communities adapt and build resilience, and to adopt new lifestyles that are more sustainable," he said.

In delivering the homily at the plenary's opening, Philippine Cardinal Luis Tagle, head of the Vatican Congregation for the Evangelization of Peoples, encouraged all Christians to cultivate a spirit of caring toward all living things and for delegates present to address the roots of the world's environmental challenges.

"We need to discuss the root cause of the environmental degradation to have concrete resolutions after the assembly. Otherwise, we will have cosmetic resolutions from the assembly," Tagle said.