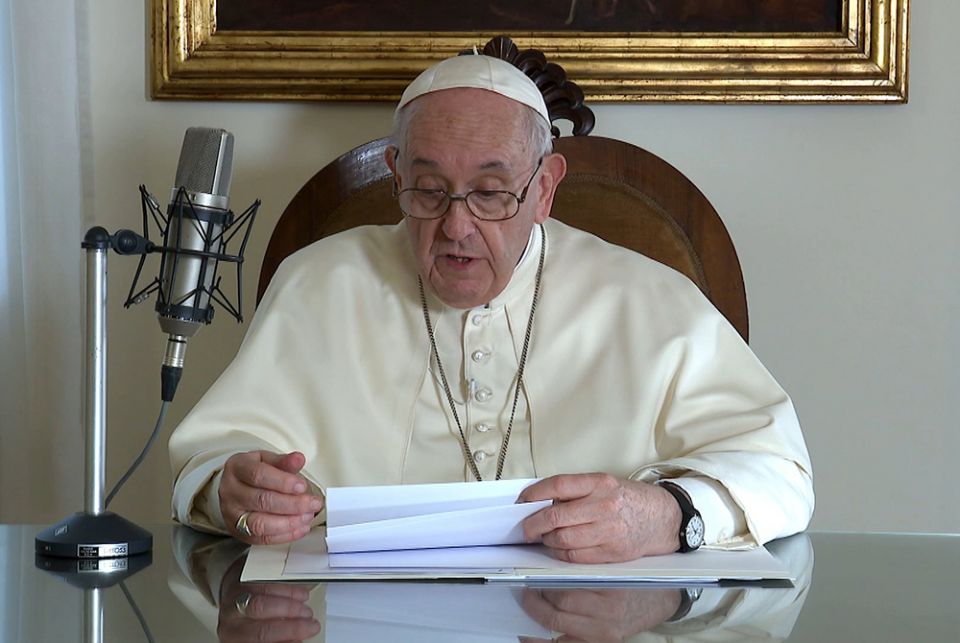 Pope Francis reads a message to listeners of BBC Radio Oct. 29, in this still image taken from video released by the Vatican. (CNS/Vatican Media)

London — Pope Francis took to British airwaves Friday morning with a call for radical decisions and rapid action at the pivotal COP26 climate summit, saying the political leaders and diplomats descending on the United Kingdom are "urgently summoned to provide effective responses to the present ecological crisis" both for people today and for future generations.

Francis offered the address on BBC Radio 4's "Thought for the Day" segment on Oct. 29. The brief speech aired two days before the United Nations climate conference, known as COP26, is set to open in Glasgow, Scotland. It also came hours before he met with U.S. President Joe Biden, where the two discussed climate change among other topics in a 90-minute meeting at the Vatican.

The U.N. climate summit is seen as a critical gathering in the global effort to put into action the promises made through the Paris Agreement six years ago, and specifically for countries to take consequential steps to reduce greenhouse gas emissions this decade in order to stave off the most catastrophic impacts of global warming.

"The political decision-makers who will meet at COP26 in Glasgow are urgently summoned to provide effective responses to the present ecological crisis and in this way to offer concrete hope to future generations," Francis said.

Related: 5 reasons why Catholics should care about the COP26 climate summit

The pope framed his remarks in the context of climate change and the COVID-19 pandemic, two crises that he said "have exposed our deep vulnerability and raised numerous doubts and concerns about our economic systems and the way we organize our societies."

The seeming "succession of crises," Francis said, are interconnected and have left people feeling a loss of security and control over their lives.

"They also forecast a 'perfect storm' that could rupture the bonds holding our society together within the greater gift of God's creation," the pope said.

"Every crisis calls for vision, the ability to formulate plans and put them rapidly into action, to rethink the future of the world, our common home, and to reassess our common purpose. These crises present us with the need to take decisions, radical decisions that are not always easy," Francis said.

He continued, "At the same time, moments of difficulty like these also present opportunities, opportunities that we must not waste. We can confront these crises by retreating into isolationism, protectionism and exploitation. Or we can see in them a real chance for change, a genuine moment of conversion, and not simply in a spiritual sense."

The latter, Francis said, "can guide us towards a brighter horizon."

To do so will require a renewed sense of shared responsibility for the Earth, along with commitments to justice, solidarity "and a recognition of the unity of our human family in God's plan for the world."

"All this represents an immense cultural challenge," the pope conceded. "It means giving priority to the common good, and it calls for a change in perspective, a new outlook, in which the dignity of every human being, now and in the future, will guide our ways of thinking and acting."

"The most important lesson we can take from these crises is our need to build together, so that there will no longer be any borders, barriers or political walls for us to hide behind," he said.

For months, reports and even Francis himself suggested the pope would attend the Glasgow conference in person — something no pope has done in the quarter century of international climate negotiations — during the world leaders summit set for Nov. 1-2. But the Vatican announced in early October that the Holy See delegation would be led by Secretary of State Cardinal Pietro Parolin. A tentative schedule listed Parolin as among speakers on Nov. 2.

The BBC radio address was Francis' latest in a string of messages this year calling for radical actions to emerge from COP26. On Oct. 4, he joined other religious leaders in a joint appeal to leaders who will gather in Glasgow.

They called for nations to implement policies that will limit average temperature rise to 1.5 degrees Celsius and for more industrialized countries to deliver on pledges of financing to help emerging economies mitigate climate change and build resilience to the impacts they are already experiencing and those still to come. 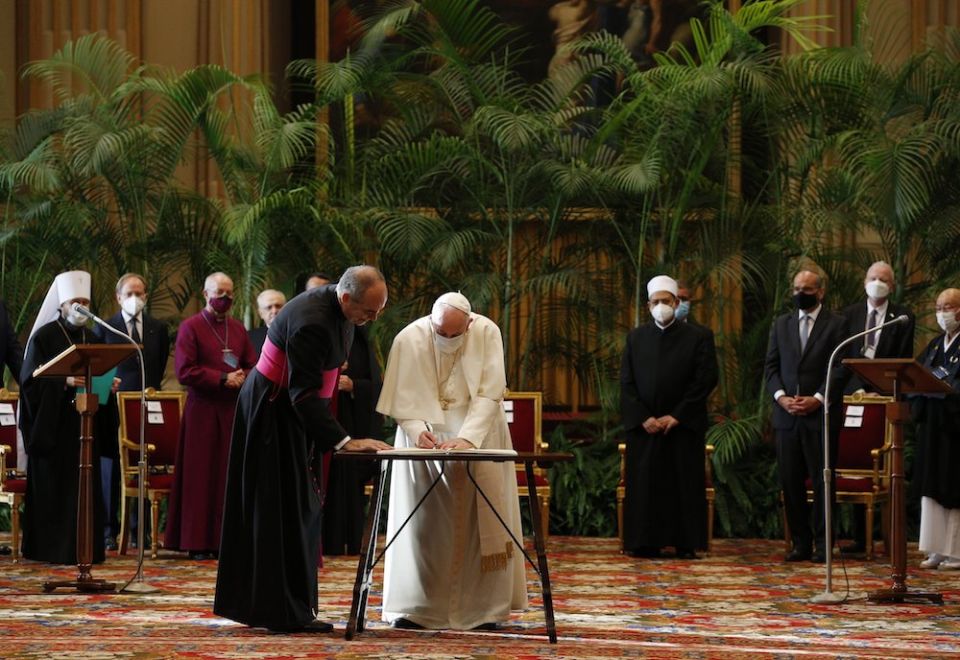 During the radio speech, Francis said he was struck by a comment at the Oct. 4 event from Joachim von Braun, president of the Pontifical Academy of Sciences, who said that if nations continue on their current emissions trajectory, his newborn granddaughter will live in an uninhabitable world.

"We cannot allow this to happen!" the pope said.

He said that everyone must commit to change course, and that "humanity has never before had at its disposal so many means for achieving this goal."

"And it is worth repeating that each of us — whoever and wherever we may be — can play our own part in changing our collective response to the unprecedented threat of climate change and the degradation of our common home," Francis said.