by Luke Henkel
Action
This article appears in the 50 Years of Earth Day feature series. View the full series. 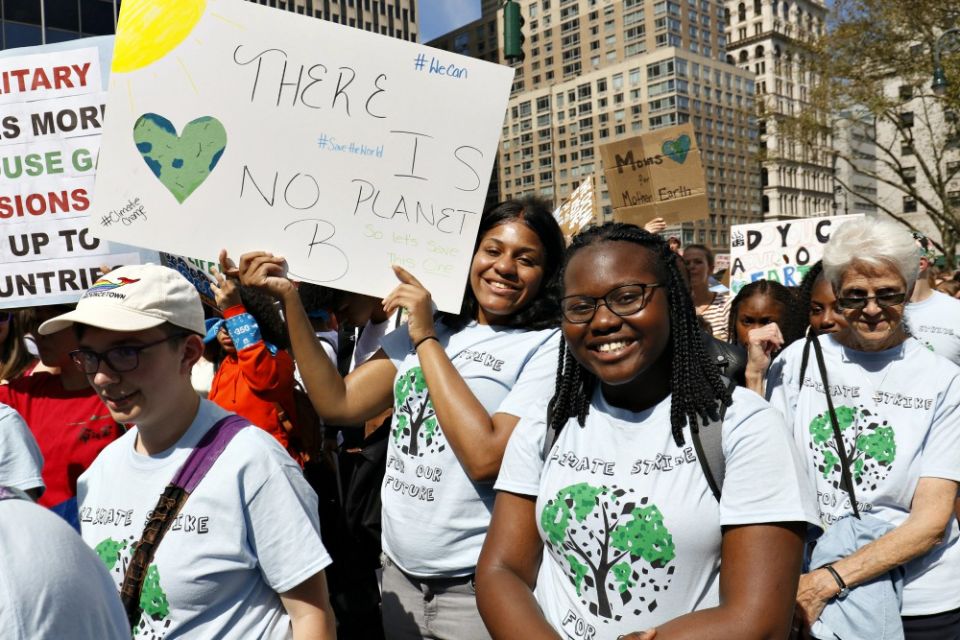 Questions have taken over these days.

They're everywhere. If you're like me, they're tearing through your mind and all your safe spaces, ravaging your sense of security with unhinged ferocity. They grow increasingly louder, and each one seems to be more existentially forceful than the last. How to survive in this global pandemic?

As the 50th anniversary of Earth Day approaches this week — and the fifth anniversary of "Laudato Si', on Care for Our Common Home" following soon after — we are of course cognizant that it's not just the coronavirus crisis taking its toll on us now. Our climate crisis has been intensifying for years, and the effects are promising to be just as deadly.

Despite the success of the first Earth Day in 1970, Denis Hayes of Earth Day Network reminds us we are now "facing an even more dire, almost existential, set of global environmental challenges, from loss of biodiversity to climate change to plastic pollution, that call for action at all levels of government."

The question is: What to do about this?

Throughout this month, while half of humanity has been locked down, communities worldwide are finding entirely new and creative ways to honor their commitments to care for our common home. On April 22, thousands of events around the world will still take place virtually. Jewish communities will be making noise all over the globe at noon (local times) as they #SoundtheCall with the shofar. In a nod to our digitalized age, interfaith Earth Day celebrations are in fact easier to pull off this year and may be a sign of greater coming together in the future.

Even still, maybe you're still saying: How can I celebrate in the midst of all this? How can any of us carry on like normal?

We don't have to. In fact, we shouldn't be trying to carry on like normal. Not now. Not later.

It's likely that you've heard we're in a "new normal." Normal is precisely the problem. While none of this right now feels normal, and plenty of us may simply be trying to grit our teeth and grip our seats until this crazy ride is over, we have a very clear message this Earth Day. "Normal" will only worsen the crises we're in.

Normal, in fact, has reversed any sort of advances made from the first Earth Day 50 years ago. Earth Day Network President Kathleen Rogers says it clearly: "Progress has slowed, climate change impacts grow, and our adversaries have become better financed."

"Normal" will soon have us spewing even greater emissions with reduced regulations on car exhaust. "Normal" is asking us to spend, spend and spend some more to recover from the wreck of COVID-19.

We have a choice in response to this. Pope Francis posed this perfectly in an interview, released during Holy Week, regarding the ongoing global lockdowns. "We have to respond to our confinement with all our creativity. We can either get depressed and alienated ... or we can get creative."

What happens when we get creative?

I'm sure you've seen plenty of examples, both big and small, in your own neighborhood or in the ways you might be invited to observe Earth Day. Quick, decisive and creative responses from both individuals and governments are the only way to protect our health and prevent further harm. We are either creative, or we perish.

If this sounds stark, I'm hardly alone in arguing for a bold path. Neither is Pope Francis.

Two thousand years ago, Jesus preached and taught in a time of serious crisis. The big deal then was Roman dominion and occupation, and Jewish liberation. The oppressed were desperate. They'd had enough of all the powerful forces pushing them down. They needed freedom.

In response, Jesus gave them a choice: You can continue to trust in old systems and believe that a new leader or kingdom of this world will be the answer to all your problems — or you can trust in a totally new kingdom, one not of this world, one that is like nothing you know and goes by none of the rules that you're used to, but that will bring the true freedom you seek.

Understandably, the powers that be would have none of this message. They were "filled with fury" and sought to "hurl him headlong" down a hillside outside the synagogue (Luke 4:28-29). Jesus was telling the poor and the marginalized that with just a little creative energy on their part — indeed, with faith in this new "kingdom" the size of a mustard seed (Matthew 17:20) — all the old structures would soon crumble, and God's kingdom would come (read: God's vision for this world would become reality).

Our situation today is not dissimilar. As Pope Francis writes in Laudato Si', his 2015 encyclical on the environment, we are under the absolute reign of a consumerist, throwaway culture. Our minds are occupied by the destructive forces of a technocratic paradigm that have us believing in unlimited progress with no consequences, and consumerism as salvation. This is ravaging our planet and our humanity.

Meanwhile, the powers that be keep forcing the same tired answers on us: domination, subjection, extraction, pollution, waste. This continues even, perhaps especially, in the midst of the pandemic as global leaders seek to put economic well-being above the health and thriving of their people. We need liberation.

Pope Francis' message in Laudato Si' is a direct parallel to Jesus' promise of true freedom and complete joy. With a creative response, we can break the cycle of destruction and ecological devastation happening all around us. With (a lot of) faith in the new way God asks of us, we will hear the cries of the Earth and the cries of the poor as our own. What is that way?

That way is a shift in allegiance. It is believing not in any power, system or ideology that we know of to salvage us or our planet. It is believing in the endlessly creative power of God and the very goodness God originally gave to us.

It is believing not in a hyperindividualism that would buy us out of crises but in an undying, transformative belief in our interconnectedness that would have us love our way to a complete and final unity in which all "poor men and women ... have been liberated once and for all" (Laudato Si', 243).

When we shift our allegiance to God's endlessly creative goodness, we will have the imaginative love to do what God asks us to do. Our neighbors will thrive just as we thrive, and ecosystems will too. We will assuage the tears of people and planet, not just on this one Earth Day or the next, but in fact every day. Earth Day will be Earth Life, a shared "journey through this land seeking God" (Laudato Si', 244).

Let this Earth Day not just inspire you for a few hours. Let it inspire you to be drawn into the eternal "caress of God" (Laudato Si', 84), with that tiny mustard seed of creativity God implanted in your heart.

That will be our new normal.

[Luke Henkel is chair of St. James Cathedral's Care for Creation Team in Seattle. He is also a local leader of the Citizens' Climate Lobby's work on behalf of federal carbon pricing legislation. A member of EarthBeat's advisory panel, he is working on his master's degree in theology and ecology at Seattle University.]

Commentary | Earth Day 50 years on: It's all about the questions