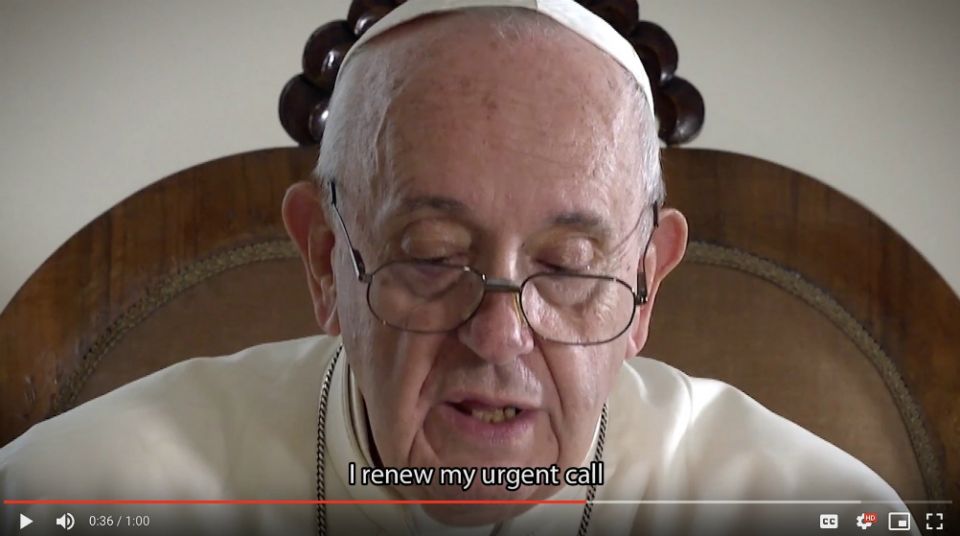 Renewing his "urgent call to respond to the ecological crisis," Pope Francis invited the 1.3 billion Catholics worldwide to join a week of celebration and action in May commemorating the fifth anniversary of his landmark encyclical "Laudato Si', on Care for Our Common Home."

In a video message March 3, Francis officially announced Laudato Si' Week, set to take place May 16-24. Throughout the nine days, the pope has asked the global Catholic community to undertake ambitious actions to address the mounting environmental perils facing the planet and its people — climate change; ecosystems in the Amazon, Australia and the Arctic approaching tipping points; and the unprecedented threat of biodiversity loss facing 1 million plant and animal species.

The initiative is the latest spearheaded by the Vatican under Francis, who throughout his seven-year papacy has persistently called Catholics and non-Catholics alike to an ecological conversion to safeguard the environment and preserve its natural resources for present and future generations.

The one-minute video opens with soaring images of mountains cloaked by clouds as Francis repeats a question he first posed in Laudato Si': "What kind of world do we want to leave to those who will come after us, to children who are growing up?"

It then cuts to footage of young people taking part in a climate demonstration, shouting: "What do we want? Climate justice. When do we want it? Now."

"I renew my urgent call to respond to the ecological crisis," the pope continues. "The cry of the Earth and the cry of the poor cannot continue. Let's take care of creation, a gift of our good Creator God. Let's celebrate Laudato Si' Week together."

Planning has been underway for months within the Vatican and numerous Catholic organizations around the world for ways to mark the anniversary of Laudato Si'. Those discussions have sought ways to catalyze the collective church to live out Catholic teaching on caring for creation by reducing environmental impact, and to press for substantial measures from world leaders to curtail a rapidly warming climate.

Laudato Si' Week is sponsored by the Vatican's Dicastery for Promoting Integral Human Development, headed by Cardinal Peter Turkson. More than four dozen international and national Catholic organizations have already partnered for the event, including the Global Catholic Climate Movement, Renova +, Caritas Internationalis and the International Union of Superiors General.

The encyclical, an authoritative papal letter, was signed by Francis on May 24, 2015, and was released a month later on June 18. It was the first papal encyclical devoted entirely to church teaching on the environment and human ecology.

Since its publication, Laudato Si' has animated thousands of environmentally focused conferences, demonstrations and actions across the Catholic world. Parishes and dioceses have started creation care teams and installed solar panels on their grounds, and in a few cases, helped resettle communities as their homes are threatened by rising seas.

Hundreds of Catholic organizations have divested their finances from fossil fuel companies and advocated for bold climate policies. Relief and aid organizations have responded to regions struck by devastating weather-related disasters, and with it, worked with poor and marginalized communities, which often suffer the greatest from storms, droughts and wildfires exacerbated by climate change, to establish mitigation and adaptation plans.

Despite those steps, the sense within Catholic groups attuned to environmental issues is that the present threats from human activity to ecosystems require more from the church — both as a leader on the world stage and in raising awareness among its members of the Christian responsibility to care for God's creation. In November, the outgoing head of the U.S. bishops' conference said that climate change was "important" but not "urgent."

Global Catholic Climate Movement said in a press release, "With about one-sixth of the world's population organized in more than 220,000 parishes around the globe, the Catholic Church plays a unique and vital role in addressing the environmental crisis."

Added its executive director, Tomás Insua, "Pope Francis is calling us to return to the core of who we are as Christians: people who love our neighbors as ourselves. The climate catastrophe is increasing the risk of hunger, sickness, and conflict for our most vulnerable neighbors. Every minute we spend warming the planet is a tragedy for the most vulnerable. Pope Francis is urgently calling us to act on the values of our faith, here and now."

Climate scientists have concluded that to avoid the worst impacts of climate change requires limiting average temperature rise to 1.5 degrees Celsius (2.7 degrees Fahrenheit) by the end of the century. To put the planet on that path, global greenhouse emissions must be nearly halved in the next decade before reaching net-zero emissions by 2050.

The encyclical's fifth anniversary comes amid several major milestones in the wider environmental community. April 22 will mark the 50th celebration of Earth Day. Organizers of that event hope to galvanize 1 billion people to increase pressure on world leaders for action on climate change ahead of COP 26, the United Nations climate summit, to be held in Glasgow, Scotland, and led by the United Kingdom. At that gathering, which will mark the fifth anniversary of the adoption of the Paris Agreement, nations are expected to submit more ambitious plans to reduce their emissions.

The increased Vatican focus on the environment in 2020 comes after it hosted a special synod for the Amazon in October 2019. At that gathering, bishops, indigenous leaders and Catholic organizations from the Amazon rainforest called for increased commitment from the universal church to address ecological destruction.

In his own response to the Amazon synod, Querida Amazonia, Francis wrote "A sound and sustainable ecology, one capable of bringing about change, will not develop unless people are changed, unless they are encouraged to opt for another style of life, one less greedy and more serene, more respectful and less anxious, more fraternal."

A website for Laudato Si' Week will serve as a clearinghouse for the various actions and events planned by Catholics. It also includes resources to help parishes and other groups take steps to mark the encyclical turning five. Already, some have moved forward with plans.

In January, the U.S-based Catholic Climate Covenant unveiled its Catholic Climate Project, an intergenerational initiative to galvanize American Catholics to commit to and advocate for ambitious climate solutions. The project plans to coordinate such actions as prayer services, liturgies and service projects, public demonstrations, classroom instruction, and advocacy with church and political leaders.