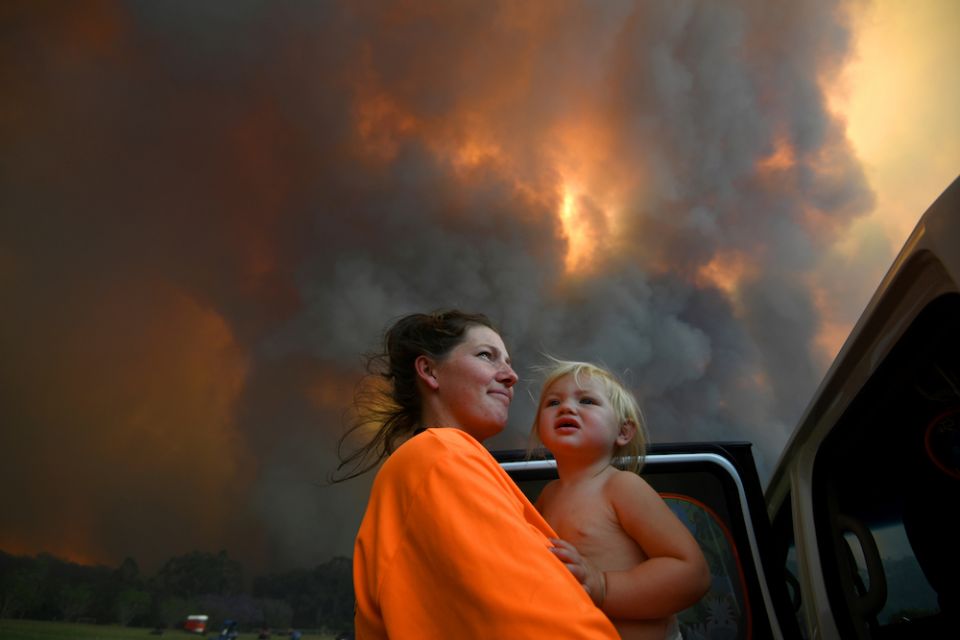 I'm not the type of person who cries easily at commercials or even the news. But the recent news reports of the destruction of potentially half a billion animals broke me — specifically an image of a small koala bear who was badly burned in a fire. Her fur badly singed, she stretched out her paws, literally crying like a baby. She expressed the emotions of a wounded child who was not only distressed, but confused by what had hurt her so badly. I burst out sobbing, surprising even myself, and was unable to finish my breakfast. My sorrow was quickly replaced by rage, specifically at the human beings, or perhaps the human condition, that made this suffering possible.

This feeling isn't new to me. I live on the south shore of Long Island. Traces of human carelessness and callousness are littered all along our coastline, even during the coldest months of the year. Even on the briefest of walks, you cannot avoid finding plastic bags and bottles, beer cans, and deflated balloons on your path. I try to pick up as much as a can whenever I can, but it is a Sisyphean task. And all I am left thinking about it is all the junk I won't be around to pick up and imagining what bird or turtle or other majestic sea creature might be maimed or killed by what I have missed. Walks on the beach aren't as peaceful as they used to be.

There is a growing conversation about what some call climate anxiety, or climate depression, or even climate rage. I feel like I cycle through all three of these states at regular intervals.

The situation is serious enough that the BBC created an entire Climate Emotions series, examining the kinds of therapies that are being offered to cope with the sense of grief and loss that climate change is stirring in people's psyches, and whether it is wrong to be hopeful or optimistic about reversing climate change.

Of course, there are countless victims of the effects of global warming who are suffering post-traumatic stress. Ask anyone who had to flee one of the infernos in California or Australia, or survivors of cyclones or floods.

But another form of climate stress is emerging. In her recent essay, "Under the Weather," Ash Sanders writes about psychiatrist Lise Van Susteren, who has coined the term pre-traumatic stress disorder to describe those who are suffering stress, insomnia, intrusive thoughts about the climate disaster that is gradually impinging on us. Every night when she went to bed, Van Susteren "would see refugees surrounded by barbed wire, animals trapped in the path of a hurricane, people stranded in floodwaters." She would also see a child asking her repeatedly why she hadn't done anything to stop it.

Both the BBC series and Sanders ask a similar question: Should be we pathologizing what is actually a reasonable and even healthy response to an existential threat?

One thing society doesn't seem to need treatment for is how to respond to the casualties of climate change. Celebrities have dumped millions of dollars into aid for Australia, and koala conservation agencies have been flooded with volunteers. The compassion is there, but only after the fact, when the suffering becomes unavoidable. And yet, throwing money and people-power at clean-up, rescue and relief can't be a sustainable model given that things are only going to get worse.

Back in 2014, I interviewed St. Joseph Sr. Elizabeth Johnson about her then-new book Ask the Beasts: Darwin and the God of Love. In our conversation, she was particularly concerned about extinction, pointing out that an estimated 350 species are going extinct every day.

"We are breaking twigs off of the tree of life," she told me. The Australian fires may have lopped off several branches.

Johnson's treatment for a sick society is to call for a new kind of conversion. "We have to be converted to the Earth," she told me, adding that our care for the planet must become "an intrinsic part of our love of God."

As a Catholic, I want to believe in the intrinsic goodness of every human person, but some days I see myself slipping into a more Calvinist mindset in my increasing fear that perhaps we really are totally depraved.

But several of Johnson's profoundly Catholic ideas keeps bringing me back from the brink of despair. "The ecological crisis makes clear that the human species and the natural world will flourish or collapse together," she writes in her book Abounding in Kindness. We have to turn away from "the delusion of the separated human self and the isolated human species" and instead we must recover, in the depths of our being, "our capacity for communion with the natural world."

Like every creature on this Earth, we are vulnerable and we are striving to live and to flourish.

If we believe that the living God created and empowered the evolutionary world, Johnson writes, then it is "fair to affirm that the Creator God is with creatures in their magnificent living and flourishing, their suffering and dying, holding each in redemptive love, drawing them into an unimaginable eschatological future in which all will be made new."

"The world's affliction even at its worst does not have the last word," Johnson also writes. "Or so we hope." Some days that eschatological hope, though it does not seem nearly adequate enough, is all I have to cling to.

Johnson named her book Ask the Beasts from a line in the Book of Job 12:7, which begins, "Ask the beasts and they will teach you; the birds of the air, and they will tell you." We haven't really thought to ask the beasts about what redemption might actually mean, Johnson told me in that interview. Indeed, if we want to understand who the living God might be, we need to look at the complex, beautiful, evolutionary life that is flowing through all living beings. Perhaps if we listen to them, they will also know what might save us?

I still cannot get that image of the suffering koala bear out of my head, and I cannot stop hearing her cries. But perhaps in addition to crying along with her, it is time to also listen to what she is trying to tell us, not only about the living God who suffers with her, but also about what we must desperately and urgently do in order to survive.

[Jamie L. Manson is books editor and a longtime, award-winning columnist at the National Catholic Reporter. Follow her on Twitter: @jamielmanson.]

Editor's note: We can send you an email alert every time Jamie Manson's column, Grace on the Margins, is posted. Sign up here.

Column | As climate change worsens, so does our grief and distress