Updates from 45 faith groups around the world 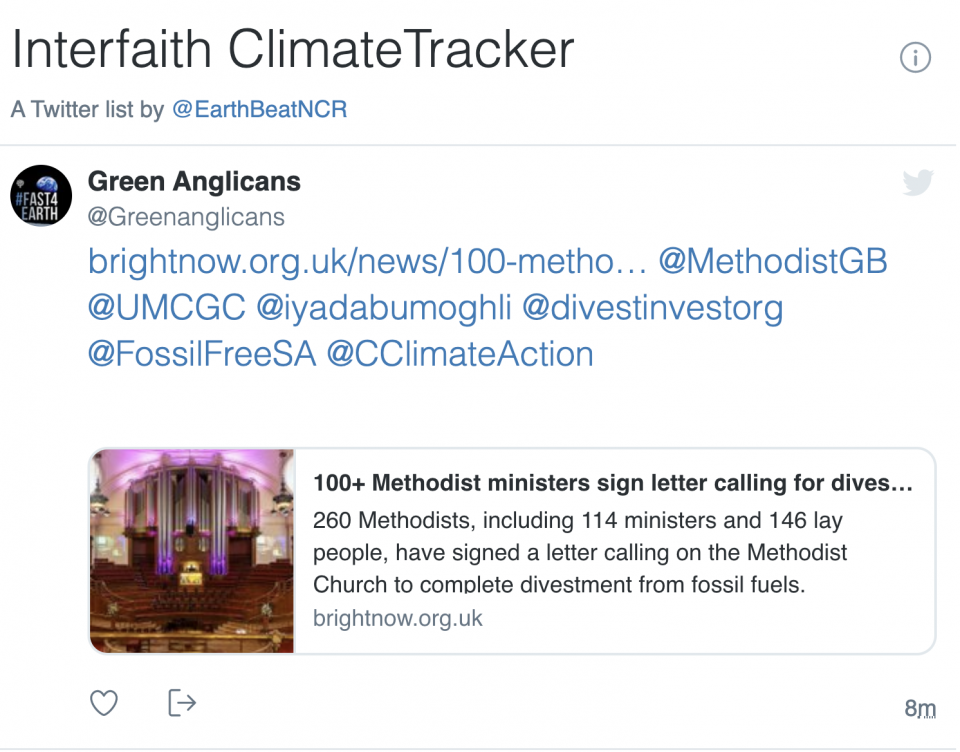 God knows that anyone concerned about the climate crisis could use an occasional infusion of good news. One of my favorite paths to an encouraging word begins with a scroll down the EarthBeat homepage to our Interfaith Climate Tracker.

The Tracker updates 24 hours a day with the latest news from 45 groups around the world that are working on climate issues from the perspective of faith, many faiths, in fact.

It's not that these groups are drawing a happy face on the sobering prospects that lie ahead for us without significant action to slow global warming. But they do document the good and difficult work that's getting done on multiple fronts.

Here are a few examples from the last day or so:

The National Black Environmental Justice Network has relaunched! Be sure to go follow them and learn more below! @nbejn1#ActOnClimate https://t.co/dFBrCxk07L

How Green can we make the 'new normal'? Join @EcoSynagogue's expert panel to explore a critical question of our time, part of #LCAW2020. With @josiecoh, @TamFinkelstein, Ebsen Larsen,@RabbiWittenberg + other Rabbis.
🗓️Thursday 2nd July, 8pm
📺Live on our Twitter + Facebook pages pic.twitter.com/YJq4ls0IjB

Just a week until the petition to #StopEACOP is delivered to @StandardBankZA and @smbc_midosuke. Tell these banks to say NO to financing a new oil pipeline that will put communities, climate and wildlife at risk! ➡️ https://t.co/0QRZoie3MT #FossilBanksNoThanks pic.twitter.com/cI5gW7FEBA

One reason we decided to highlight what these groups are doing is that, as political and scientific leaders have pointed out, politics and science are insufficient by themselves to move people to the level of disruptive movement it will take to head off a climate disaster.

Gina McCarthy, who headed the Environmental Protection Agency under President Obama, helped make that case for EarthBeat readers here. Philip Duffy, a physicist who heads the Woods Hole Research Center, helped organize a coalition of scientists and faith leaders around climate issues two years ago. Earlier this year on EarthBeat, he congratulated Pope Francis for getting the science and urged him to step it up on the action front.

Check out actions underway by people of various faiths on the Tracker, which you can also access directly on Twitter.

On July 7, Christian Climate Action will convene a virtual event focused on "the racial lens through which we view climate change and plan action."

One advantage of so many events moving online is their accessibility to a wider audience. If you'd like to expand the audience of your next virtual climate event, please post it here.

Since our launch Oct. 30 of last year, we've been doing what we can to raise awareness of EarthBeat. So we certainly welcome this tweet from Julia Lous-Dreyfus to her 1.1 million followers:

At some point next month, I'll be moving to a new role at NCR. That means we need a new EarthBeat editor. If you're interested – or know of someone who might be – please read the job description and follow up! The deadline for applications is June 30.

We hope you'll forward this week's newsletter to anyone you believe might want to subscribe. They can do so here.  As you know, neither EarthBeat nor NCR restricts access to coverage with a paywall. Instead we depend on readers like you to sign up for a voluntary membership. If you'd like to join their ranks, please join NCR Forward for as little as five bucks a month.