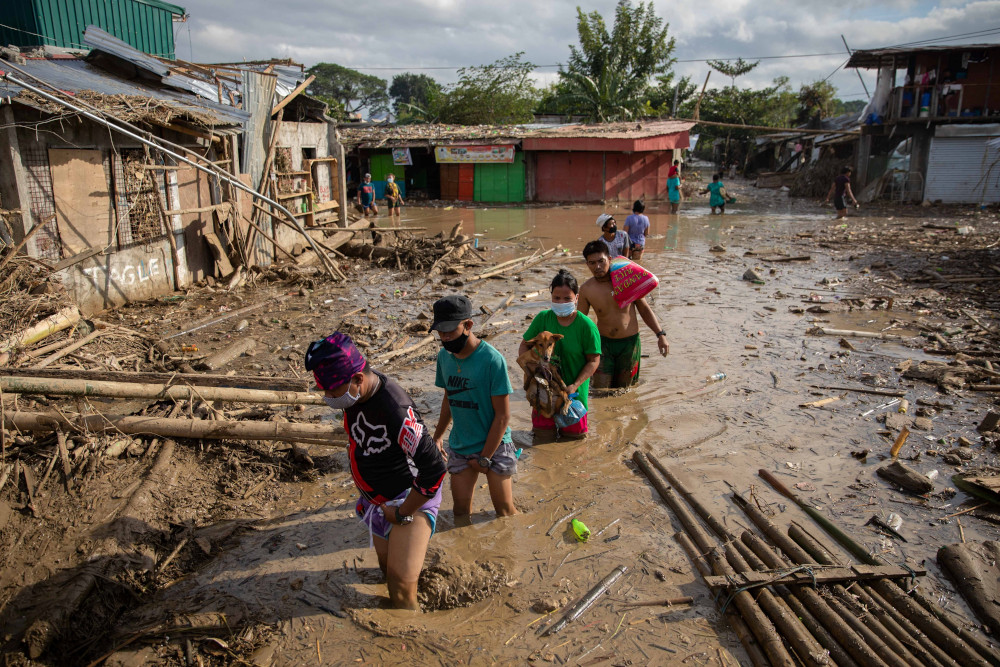 In one of the strongest declarations on climate change to date from the Catholic Church, the bishops of the Philippines have called for the local church to decline any donations with ties to the fossil fuel and extractive industries as part of a full-scale effort to disconnect church finances from the production of coal, oil and gas.

The Catholic Bishops' Conference of the Philippines delivered the directive, along with calling for church institutions to press their banks to phase out fossil fuel holdings, in a pastoral statement issued Jan. 28, the feast day of St. Thomas Aquinas.

Titled "A Call for Unity and Action amid a Climate Emergency and Planetary Crisis," the statement also outlines a plan for a national program to implement Pope Francis' 2015 encyclical "Laudato Si', on Care for Our Common Home" — including participation in the Vatican's Laudato Si' Action Platform — and places church support behind a legislative proposal to recognize the legal rights of nature.

"The cries of the earth and the poor have only grown louder in recent years due to the economic, environmental, and social losses and damages inflicted by both crises" of climate change and the COVID-19 pandemic, "which were created from exploitative human activities," the Philippine bishops said in a press release.

Signed by conference president Bishop Pablo Virgilio David of Kalookan, the pastoral statement laments that even as the pandemic has upended life, killed more than 5.6 million people globally and paused much economic activity, many past polluting practices have restarted.

"This is concerning as, while suffering from the impact of the pandemic, climate-vulnerable nations have also experienced intensifying calamities due to the instability of our biosphere," the bishops wrote, a reference to multiple deadly tropical storms, including Super Typhoon Rai in December, that have battered the island nation in the past decade.

Home to nearly 110 million people, the Philippines is one of the countries most at risk to the impacts of climate change, including more severe storms and storm surges, rising sea levels and ocean acidification that affects fishing. The capital of Manila is one of the fastest-sinking cities in the world.

That vulnerability, the bishops' conference said, places upon the country "the moral imperative of pursuing the most sustainable development pathway possible for the sake of current and future generations," particularly through its national elections in May.

While early on it appeared the pandemic may mark a turning point on global warming, the years 2020 and 2021 rank as the second and fifth hottest years on record, respectively. And after a small decline in 2020, global emissions rebounded nearly 5% to pre-pandemic levels in the past year.

The Philippine bishops said that despite Francis' encyclical and their earlier ecological pastoral letter, in 2019, "we continue to suffer an increasingly warming world and ailing biosphere triggered by exploitative practices that benefit the wealthy few but cause poverty and hunger to many." 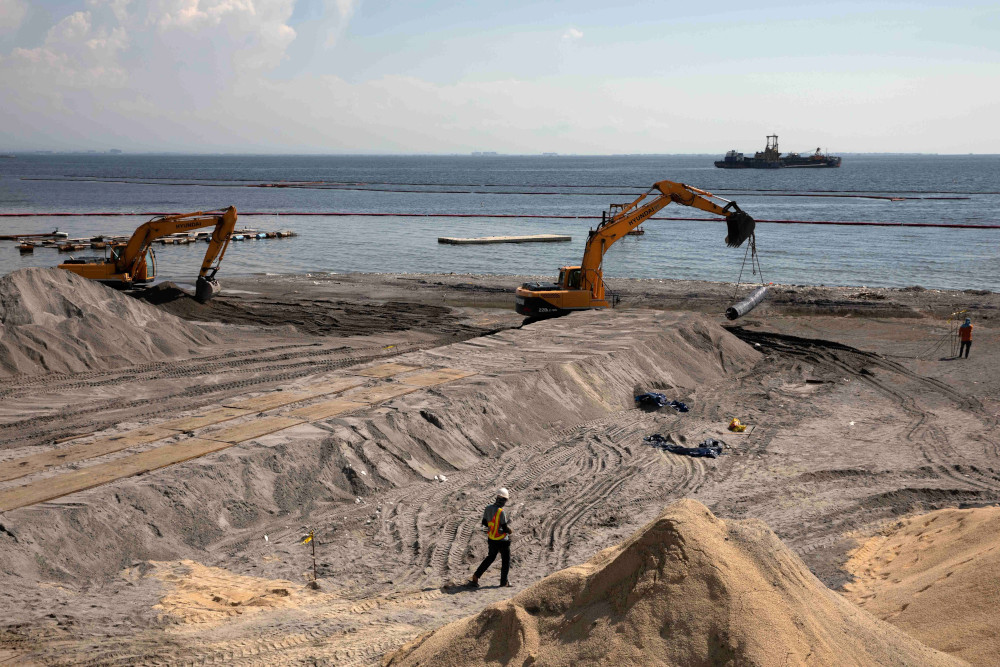 A worker stands on artificial sand or crushed dolomite, dumped on a portion of Manila Bay Sept. 4, 2020, as part of the Philippine government's efforts to rehabilitate and beautify the coastline. (CNS/Reuters/Eloisa Lopez)

Read this next: Five years ago, Pope Francis asked us to care for Earth. Have we listened?

In that 2019 pastoral letter, the Philippine bishops directed Catholic institutions to cease investments in coal-fired power plants, mining companies and other extractive projects, becoming one of at least a half dozen national bishops' conferences so far to join the fossil fuel divestment movement.

In it, the bishops reaffirmed their support of the Paris Agreement goal of holding average global temperature rise to 1.5 degrees Celsius, and to achieve that by achieving deep and rapid reductions in greenhouse gas emissions by 2030. They urged the Philippines to peak its own emissions "much earlier," and said key to that will be rechanneling finances to "disable the coal industry" as well as ending "fossil gas," an alternative term some environmental activists use for natural gas.

In that vein, the bishops urged parishes and church organizations to review their banks' activities for social and environmental issues, and where there's financial exposure to fossil fuels, to press for the phase out of such investments. Absent a divestment policy, the bishops directed Catholic institutions to withdraw their finances from those banking centers no later than 2025.

"We are now all the more aware that many of the financial institutions in whom we place our trust have been instrumental in the rise of fossil fuels, as well as other destructive and exploitative industries like mining and logging. It is unacceptable that finances so graciously provided to us are used for such industries. Financial resources must be used solely for the Common Good, Integrity of Creation, and the Glory of our Creator," they said.

Instead, the bishops said that finances should be steered toward investments in renewable energy and ecological restoration and protection projects, and church groups should "lead by example" by adopting renewable energy and other sustainability systems in their own facilities and communities. They also encouraged the development of education campaigns to promote divestment within congregations, schools and communities.

"We are now all the more aware that many of the financial institutions in whom we place our trust have been instrumental in the rise of fossil fuels."

— The Catholic Bishops' Conference of the Philippines 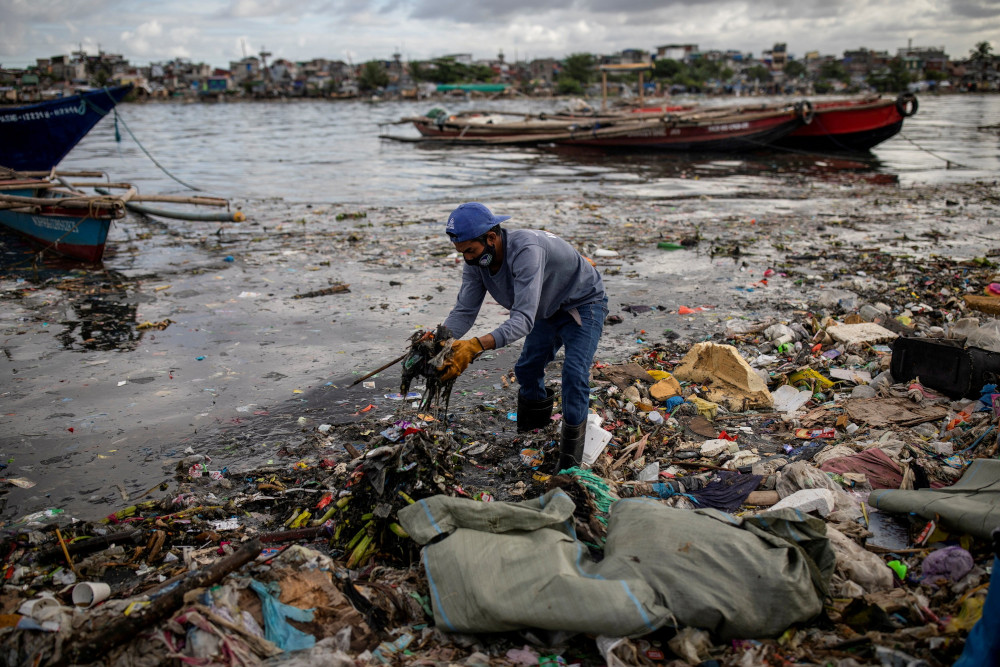 Argie Aguirre, a member of the River Warriors, gathers trash from the polluted Pasig River in Manila, Philippines, June 22, 2021. The River Warriors is a group of volunteers founded more than a decade ago with the sole purpose to pick up garbage in and around the river. (CNS/Reuters/Eloisa Lopez)

The bishops also asked that church organizations adopt a "non-acceptance" policy regarding donations of any kind from owners, operators and representatives of extractive industries, listing specifically coal, natural gas, mining, quarrying and logging.

In a statement, Fr. Antonio Labiao, executive secretary of Caritas Philippines, said that with the financial guidance "the Catholic Church has drawn the line. We will ensure that our due-diligence policies are in place. It is not anymore business as usual."

Christina Leaño, associate director of Laudato Si' Movement, told EarthBeat that the document's specifics make clear that the church intends "to pull the moral license from the fossil fuel industry."

She added that the bishops' proposal to deny donations from owners and operators of fossil fuel and extractive companies is a "pretty drastic" statement, especially in a country that is the most dangerous in Asia for environmental defenders that has only increased during President Rodrigo Duterte's time in office.

Rodne Galicha, executive director of lay-led Living Laudato Si' Philippines, told EarthBeat that he commended the bishops' latest pastoral statement, which he said "presents a bold and courageous move championing radical change in the way the hierarchy deals with temporal goods for the sake of social justice and common good."

"They're taking it to the next level. And they're being very specific as opposed to kind of a broad statement," she said.

Explaining their directives on finances, the Philippine bishops cited the Laudato Si' implementation guidelines released by the Vatican in June 2020, which recommended fossil fuel divestment and reinvestment in renewable energy and sustainability initiatives. 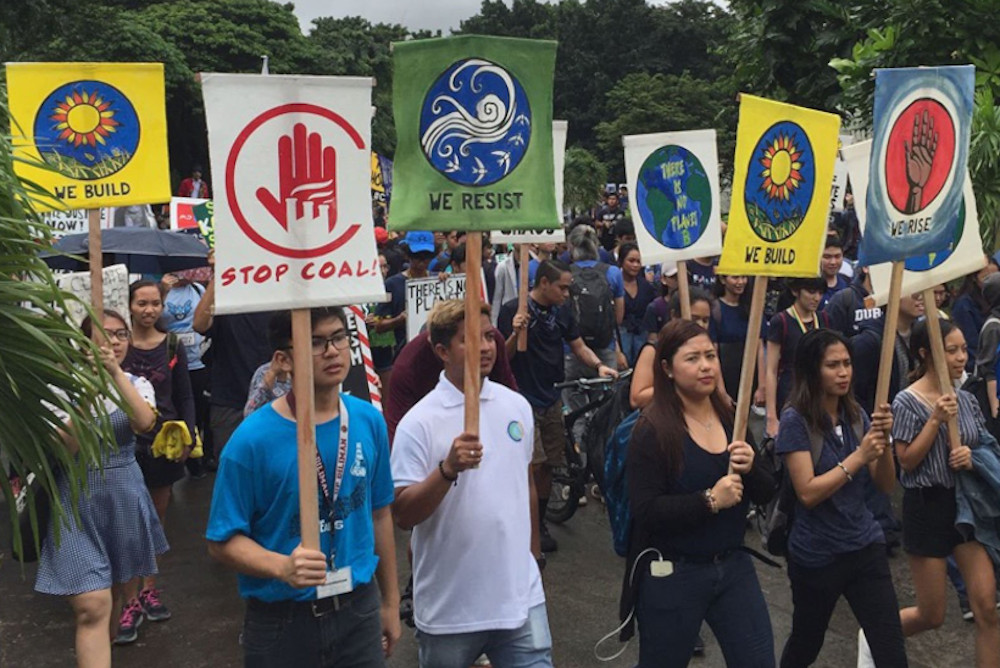 Youth climate activists in Manila, Philippines, were among 4 million people worldwide who participated in the Global Climate Strike in September 2019. (CNS/Courtesy of Global Catholic Climate Movement)

Since Laudato Si' was issued, the Catholic Church in the Philippines has been a leader in responding to the pope's call in that papal document to "protect the earth and to ensure its fruitfulness for coming generations."

Beyond finances, the new pastoral statement builds upon that work by expanding its National Laudato Si' Program, which grew out of the 2019 pastoral letter.

The bishops' conference recommitted to creating an ecology desk within each of its 78 dioceses and archdioceses, with 15 already established, and directed bishops and religious superiors to prioritize support in their budgets for their work. The National Laudato Si' Program will also lead education campaigns, bothin within parishes and schools, about Francis' encyclical and how to act on it. That includes participation in the Laudato Si' Action Platform — an ambitious program of the Vatican Dicastery for Promoting Integral Human Development that maps out seven-year plans for all parts of the church to achieve sustainability in the spirit of the encyclical's concept of integral ecology. The National Laudato Si' Program will lead the country's participation in the platform.

The conference also said it will institutionalize annual celebrations of the Season of Creation, in September, and Laudato Si' Week "to nourish our spirituality and awaken our identity as members of a single, sacred-Earth community called to care for our Common Home and all life in it."

Galicha said that the continuance of new ecological desks and the development of a Laudato Si' Schools network were particularly encouraging. He also applauded the synodal and multi-sectorial process the bishops have used to come with "strong stances in responding to challenges of Laudato Si' and the climate crisis."

The bishops' conference also lent their support to a rights of nature campaign around legislation currently in both houses of Congress. In addition, they called for government departments to involve local and Indigenous communities in all decisions around ecologically and socially hazardous projects, and for increased protections for environmental defenders and the lands they seek to protect.

The rights of nature bill, the bishops said, "can push forward a Philippine society where mining, fossil fuels, development aggression, and other forms of ecological destruction are cast away."

Galicha told EarthBeat that it was important to again address protections for biodiversity and its defenders because violations of the rights of both have lingered even after the 2019 pastoral also spoke to the issue.

Leaño said that for the bishops to include such language around biodiversity "and even to recognize that non-human [creatures] have rights is a huge thing."

She told EarthBeat the pastoral statement reinforces the Philippines as a leader on climate and ecological justice, and represents a call to action to the rest of the church, including in the United States.