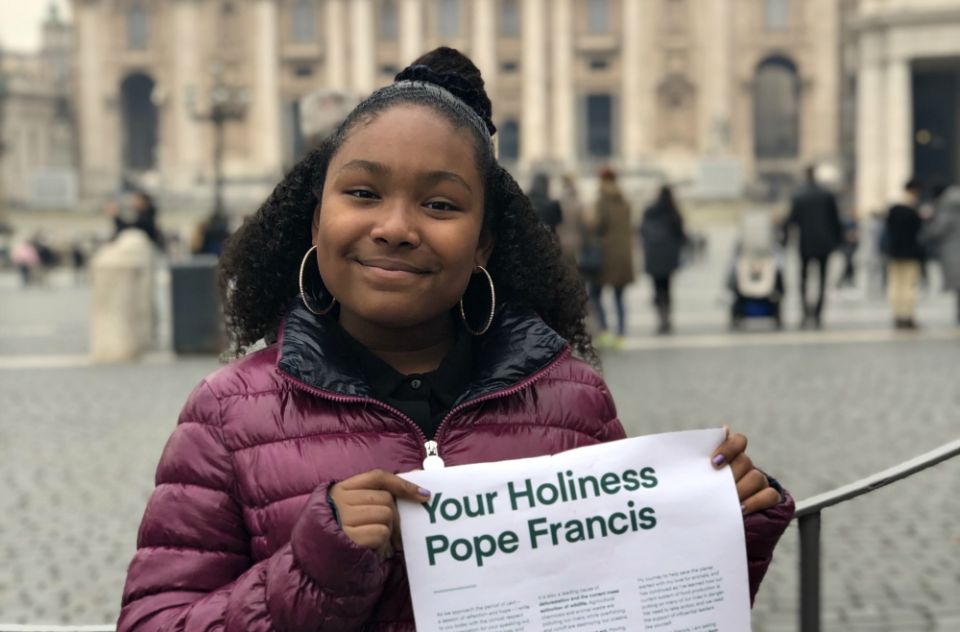 At the Vatican on Feb. 19, Genesis Butler shows the letter she wrote to Pope Francis asking him to adopt a vegan lifestyle during Lent. (Courtesy of Million Dollar Vegan)

It doesn't appear a vegan diet will be on Pope Francis' plate this Lent.

As the 40-day liturgical season began March 6 with Ash Wednesday, the 12-year-old animal rights activist who had challenged Francis to adopt during Lent a vegan lifestyle — forgoing animal-based foods and products — shared a letter she received on behalf of the pope. 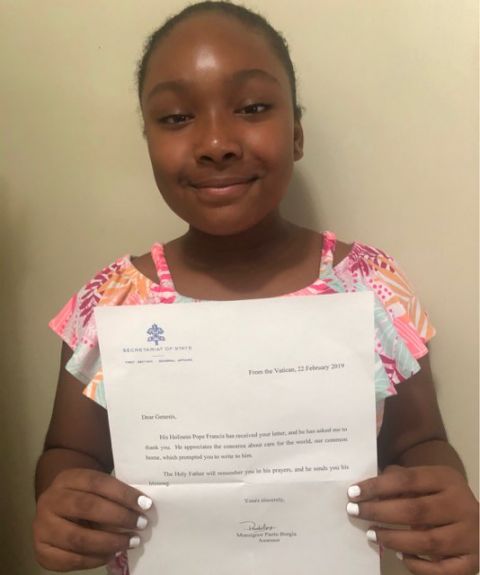 Genesis Butler holds the Feb. 22 letter she received from Msgr. Paolo Borgia, an official with the Vatican's Secretariat of State. (Courtesy of Million Dollar Vegan)

He thanked her for writing him.

He encouraged her concern for the caring for the planet.

He offered her his prayers.

He declined to say anything about her offer.

"His Holiness Pope Francis has received your letter, and he has asked me to thank you," read a letter dated Feb. 22 from Msgr. Paolo Borgia, an official with the Vatican's Secretariat of State, to Genesis Butler, the young vegan and animal rights activist. "He appreciates the concerns about care for the world, our common home, which prompted you to write to him. The Holy Father will remember you in his prayers, and he sends you his blessing."

In February, Butler, with the help of the nonprofit Million Dollar Vegan, extended the vegan challenge to the pope, offering $1 million to the charity of his choice if he gave it a try. The great-grandniece of Cesar Chavez, who became vegan at age 6, pointed to the large amount of climate-warming greenhouse gas emissions that animal agriculture produces, in addition to land, health and food security benefits that can come with plant-based diets.

In a story posted on the website of Million Dollar Vegan, Butler said she was "truly humbled" by the pope's response and blessing, and that he included her in his prayers. "It means more to me than I can ever express in words."

She also made one more request: an opportunity to share a vegan meal with him sometime during Lent.

Matthew Glover, CEO of Million Dollar Vegan, also expressed his gratitude for the pope's response, and pointed to research from Oxford University that showed adopting a plant-based diet can reduce personal greenhouse gas emissions by 30 percent to 50 percent.

While Francis may not be altering his diet this Lent, other Catholics are.

The Global Catholic Climate Movement has made "eating simply" the theme for this year's Lenten program. It asks Catholics to add another day beyond Fridays to fast from meat or to incorporate more plant-based meals throughout the 40 days.

As Lent began, 650 people had already signed up, but that number is expected to grow "quite a bit as we move deeper into the Lenten season," Tomás Insua, Global Catholic Climate Movement executive director, told NCR in an email. He added there is "a big appetite to connect our daily practices at mealtime with the Catholic values that bring so much meaning to our lives."

On its website, the network of 650-plus Catholic organizations around the world further explained push behind the program: "Many of us enjoy meat, and we're grateful for the farming families who make our meals possible. Focusing our diets on plant-based meals and enjoying meat as an occasional treat is a sustainable way of living in our common home."

Cutting back on meat consumption offers a way of "growing in simplicity" during Lent, it added, that can also make a positive impact on the planet.

It cited a study from Yale University that found 80 percent of deforestation in the Amazon comes from cattle ranching. In some cases, the land is taken illegally from indigenous people.

Another study, published in Nature magazine in November 2014, found greenhouse gas emissions far greater for meat production compared to fruits and vegetables, and that switching meat-based diets with more on seafood, grains and vegetables could reduce emissions from agriculture, as well as lead to "substantial health benefits."

Adopting a plant-based diet "deepens our spirits during the season of Lent," Global Catholic Climate Movement said on its website, "when we find simplicity and humility with Christ. It also helps us sustainably inhabit our common home, protecting creation and standing in solidarity our brothers and sisters around the world."