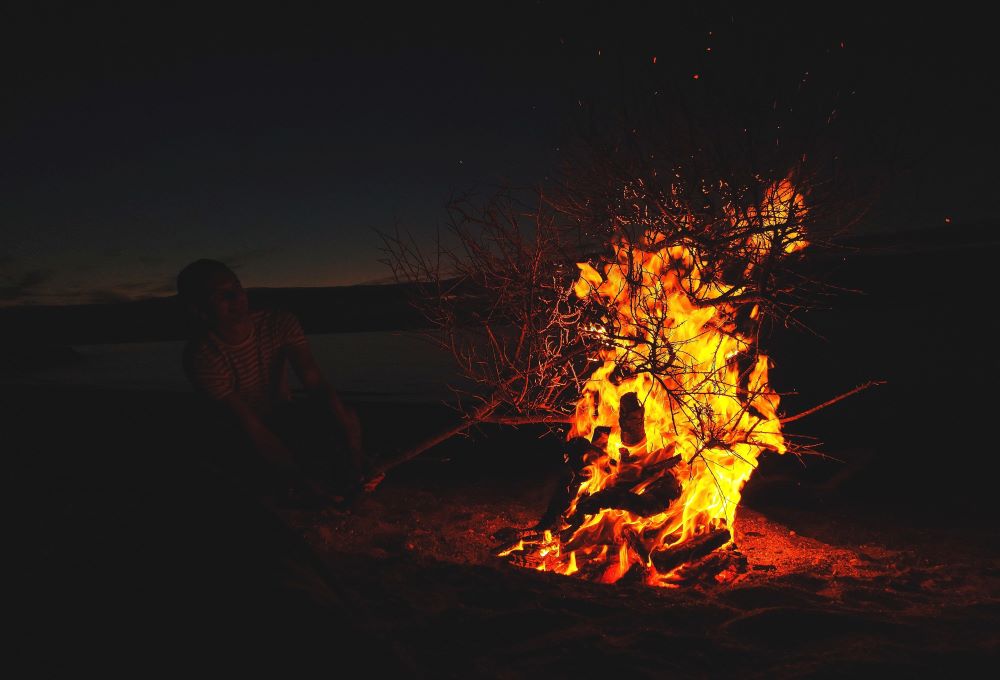 A person near a bonfire on a beach before sunrise in Courtown, Ireland (Unsplash/Traolách Conboy)

Fire has always linked the Celtic peoples to the Spirit World. And it can do the same for us today. On June 23, the eve of the Nativity of St. John the Baptist, connect to an ancient tradition, Oíche Tine Seáin ("The Night of John's Fire") and rediscover fire not only as a survival tool or scorching threat, but also as a sacred presence.

In the New York Times bestseller Braiding Sweetgrass: Indigenous Wisdom, Scientific Knowledge and the Teaching of Plants, Potawatomi botanist Robin Wall Kimmerer extols the importance of fire for Indigenous peoples. She quotes her father: fire carries our prayers, represents life and healing and is an important part of many ceremonies.

While Kimmerer teaches the wisdom of North American Indigenous peoples, her work has helped me to think about remnants of similar traditions among non-Indigenous peoples. By looking at the tradition of John's Fire through the lens of her work, the importance of fire in Celtic, particularly Irish, traditions comes into new focus.

From time immemorial, four sacred fires marked the year in Ireland. They were lit quarterly, between the solstices and equinoxes. The fire in the beginning of November, Samhain, evolved into Halloween and the Catholic holy days All Saints Day and All Souls Day. 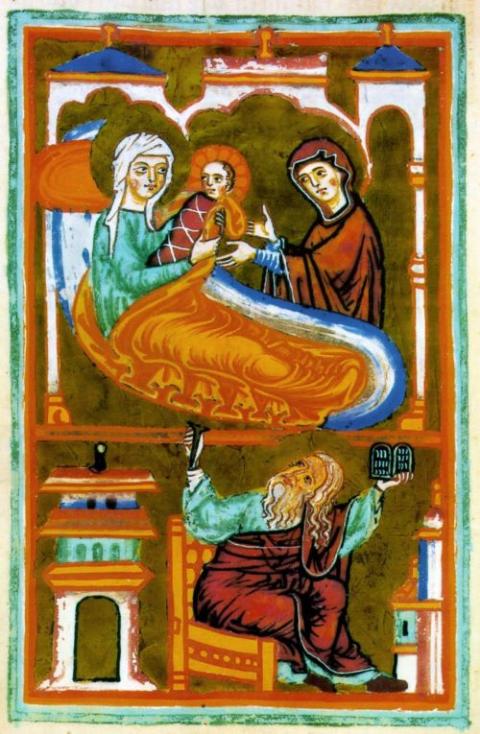 An icon depicts the birth of John the Baptist with his mother Elizabeth, father Zechariah, and Mary present. (CNS/KNA)

The observance of Beltane, in early May, marked the opening of the pasture for grazing and honored Belenus, the Celtic god associated with the sun. For Beltane, all the fires were extinguished across the land. Then, the tribal chieftain lit the sacred fire, said to be by the power of the sun. From this one fire all the hearths were re-lit.

Ceremonial practices extended the power of the fire to the people and land. Offerings were made to the fire. Cattle were led through two rows of fire to purify and protect them with the power of the sun. The people sang and danced and watched for the sun to dance in the sky as it rose at dawn.

The paschal fire in the Catholic tradition has the same pattern: all fires coming from a central sacred fire consecrated by prayer and ceremony.

Sacred fires live on in an almost lost but reviving tradition. Traditionally, St. John's Eve fire traditions varied from community to community. Some fires were made with fuel gathered from every household. Many retained Beltane traditions: dancing, singing and blessing the cattle with the fire. People cast pieces of charcoal into the fields for abundant harvests and put ash outside their homes for protection.

The St. John's fire tradition was not initiated or controlled by the church authorities, though many Christian practices were included. Clergy prayed over the fire and sprinkled the site and people with holy water. People visited holy wells dedicated to various saints and also said the rosary, in one place casting a stone into the fire for each decade.

In recordings, Irish elders often talk about St. John's fire in an obscure way, emphasizing the importance of tradition without a confident explanation why. Kimmerer provides that reason: The fire itself is the prayer, something seen in other Irish practices.

Sacred fire wasn't just a yearly ritual in Ireland, but also a daily practice. Historically, all Irish homes were heated with peat fires. About 20–25% of homes still are. Before bed, the fire is "smoored," or smothered in a way that allows the embers to last all night, accompanied by Gaelic prayers.

Let eight of the mightiest angels

Round the throne of the Trinity

Protect this house and its people

Till the dawn of the day shall be.

In the early morning, the fire is reignited from the embers with more prayer. This particular Celtic prayer is from Scotland:

I will kindle my fire this morning

In the presence of the holy angels of heaven

Kindle a fire of love in the heart, the prayer continues, for all beings:

From the lowliest thing that liveth

To the Name that is highest of all.

Picture that moment of ignition: dark and cold, the first stirrings of the family, sleeping coals are fed with fuel and soft Gaelic words. Suddenly, the fire returns to the hearth and becomes the living heart of the home.

Like in the Indigenous contexts that I've experienced, there is a circular flow of fire and prayer. Prayer consecrates the fire. Even more so, it opens our eyes to fire's dynamic spiritual character and conforms us along the contours of its power. Fire is "alive": it is active, it takes and it gives and it transforms what it touches.

While God is fire — appearing on Sinai (Exodus 19:18), coming to set the Earth ablaze (Luke 12:49) and descending at Pentecost (Acts 2:3) — even everyday fire by nature is a spiritually porous element. It exists at the intersection of the visible and invisible, a kind of doorway where the Spirits appear and act, such as the angel who consumed Gideon's offering with fire (Judges 6:21).

The hearth prayers and practices establish a prayerful relationship with fire in the way St. Patrick's great prayer enacts — "I bind to myself to-day [to] … The force of Fire" — and allow for transformation. The fire's light illuminates all surrounding beings and its heat calls forth unqualified compassion. Prayer magnifies the fire and the fire magnifies us.

St. John's fire embodies this practice of the home in communities and on the land. Indeed, at its height it transformed the entire island. As noted in Balder the Beautiful: The fire festivals of Europe and the doctrine of the external soul, a visiting Englishman marveled that in 1782, "I saw on a radius of thirty miles, all around, the fires burning in every eminence which the country afforded." Another said, "a stranger would go near to imagine the whole country was on fire."

It's no accident that God called John into being at this time of year. Like the sun at the solstice, John declared that he must decrease and Jesus increase. He was the harbinger of fire: Jesus' baptism of fire and the purifying fire that will burn away the branches that do not produce fruit (Luke 3:16, 3:9). And it is no accident that he who Jesus called the greatest of those born of women (Luke 7:28) intentionally lived off the land in deep communion with all that surrounded him.

When thinking about traditions like the Night of John's Fire, the specter of "paganism" haunts some Christians, as if somehow practices connected to pre-Christian times must be in competition with Christian faith. In my experience, the recovery of ancestral traditions seems most of all to be about reasserting our humanity in the face of mechanization and increasing digitization.

Indigenous elder siblings like Kimmerer nudge non-Indigenous peoples toward embracing the journey of cultural and spiritual regeneration that they are on, not by appropriating their ways but by rediscovering our own. It is a way of entering into mystery and "naturalizing to place" — a term Kimmerer uses that means to develop new patterns of relationship without appropriating Indigenous culture — something not opposed to but actually in service of the Gospel of Life.

This solstice season, perhaps for the Nativity of St. John, celebrate with a ceremonial fire. Recognize that this is a sacred time of year and the sun is teaching us. Light the fire with prayer. Engage in one or more of the traditions in the historical record. Enter into mystery and see where it takes you. It might start a new journey home.