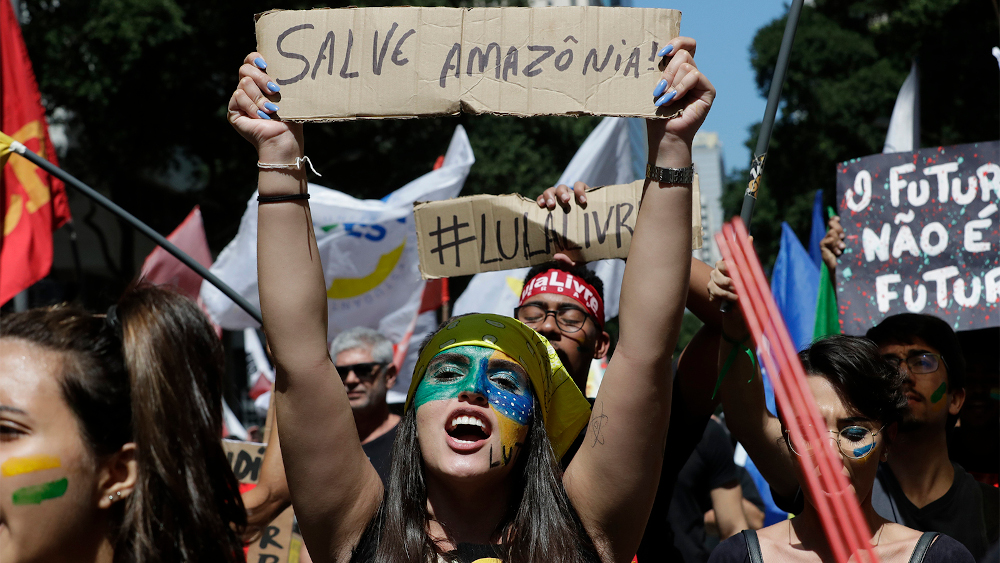 A student holds a sign with a message that reads in Portuguese: "Save the Amazon," during a protest Sept. 7, 2019, in Rio de Janeiro against budget cuts on public education carried out by President Jair Bolsonaro's administration and in defense of the Amazon rainforest. Students wore black jerseys symbolizing the mourning for the Amazon and education. (AP/Silvia Izquierdo)

Saving the Amazon rainforest requires action by Western nations, a Surinamese bishop attending the Catholic Church's synod on the Amazon region said, charging that the people of the Amazon cannot do it by themselves.

"Even if we implement all the measures against deforestation or against the polluting of the rivers," explained Bishop Karel Martinus Choennie of Paramaribo, Suriname's capital, "it would still not have an effect if (people in) the Western world — Europe, America, Japan and China — don't change their lifestyles."

The bishop spoke at a Vatican news conference on Tuesday (Oct. 22) in Rome, where the synod of bishops has been meeting for two weeks. This final and third week, the bishops are considering a draft report with recommendations for the pope that will be put to vote on Saturday.

Choennie's comments reflect those of many bishops who have spoken during the meeting and blamed Western companies and consumers for the ecological devastation of the Amazon.

A major concern of the bishops is deforestation of the Amazon rainforest, said Choennie.

"We are heading on a path of self-destruction," he said. He notes that "there are scientists who predict that if we increase the deforestation by even 5%, it will have a disastrous and irreversible effect."

Many people in developed nations do not see themselves as responsible for the rainforest's destruction, nor do they see the urgency of the problem, the bishop complained. "When they realize it, they are not willing to give up their lifestyle.

"The good living in the Western concept is a luxurious living," Choennie said. "The forest is disappearing because Europe and China and the rest of the rich world want to eat meat." The reluctance to adopt a more sober lifestyle and the desire for cheaper meat "will result in greater deforestation," he explained.

The West "wants the Amazonian people to keep the forest," said Choennie, "but they don't want to change their lifestyles, and that is the big contradiction."

Other bishops have pointed to the West's appetite for gold, timber and agricultural products as causes of deforestation.

"If global warming continues and if we don't reach the goals of the Paris agreement, the Amazon forest will disappear," explained the bishop.

"It is unjust," he continued, "because the riches only come to the West and the poverty is for us, because all the natural resources that leave our country don't make our country any better." He reports that "our education systems, our health systems, our social systems, all remain far behind."

"We need a new kind of economy, an economy of solidarity," said the bishop, "an integral ecology where they also consider nature and social life of others."

He recognizes that ecological conversion to a simpler lifestyle is not easy. "The church and everybody have the obligation for education that takes the ecological change really seriously," he said.

"If we want the governments of the Pan-Amazonian countries to change their policies of mining and deforestation," he said, "we have to offer them a real solution by maybe leasing the forest so they have a mutual interest, because climate change is affecting everybody."

He noted that there is a solidarity fund for the Amazon but only Norway and Germany have contributed to it. "The other rich countries don't want to add anything to the fund," he reported.

"There is a political stagnation," he asserted. "There is no creativity in politics and economics to change our way of life. I urge the Western governments and those in power to find real solutions."

Unless this happens, he believes the rainforest is doomed.