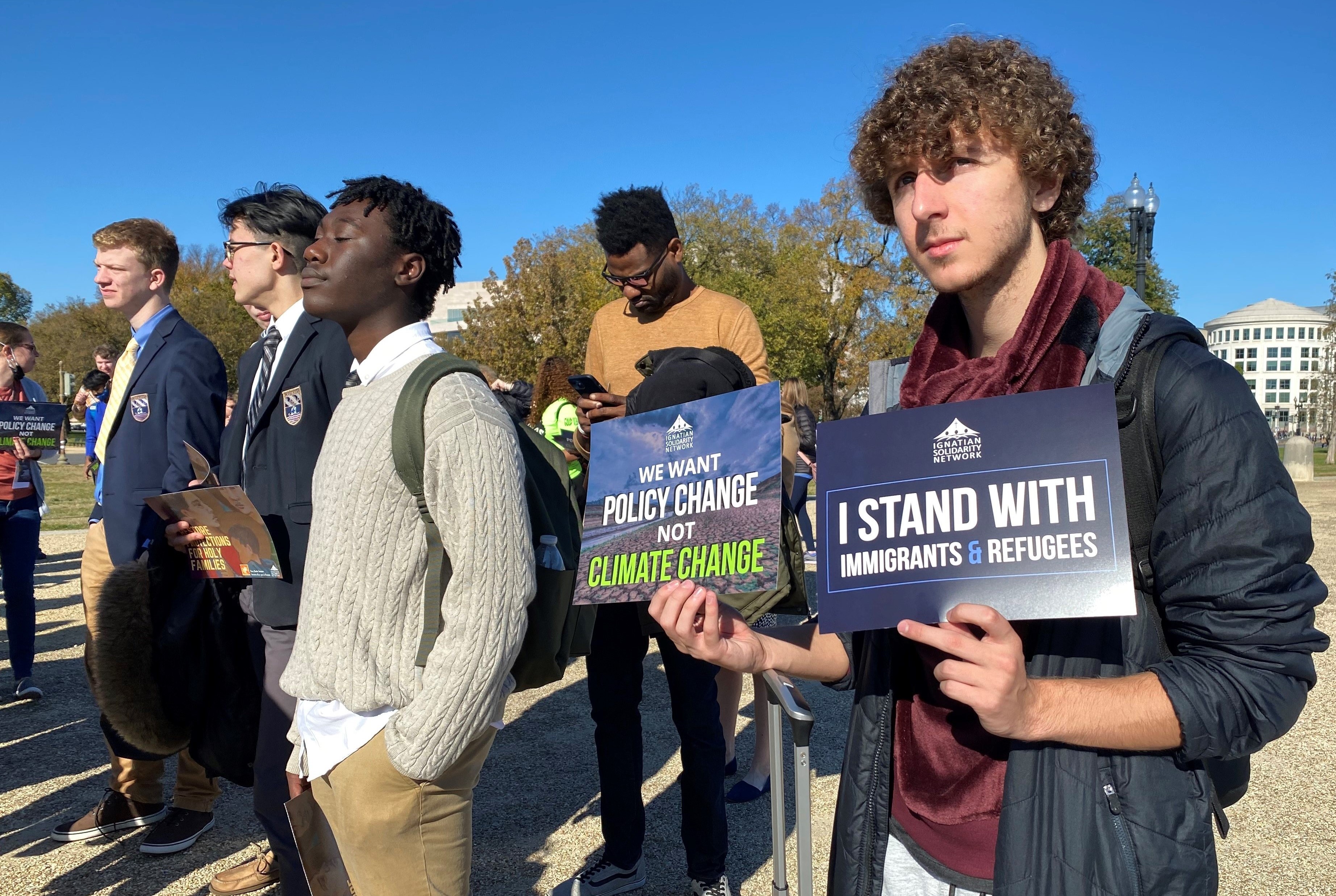 Students from the nation's Jesuit schools gather near the U.S. Capitol in Washington Nov. 8, 2021, to advocate for the environment and immigration as part of the Ignatian Family Teach-in for Justice. The students advocated for these issues as Congress debated President Joe Biden's Build Back Better bill. (CNS/Rhina Guidos)

The U.S. bishops threw their support behind federal legislation that would direct roughly a half-trillion dollars to address climate change, writing to lawmakers in Washington that "this is a critical time" for climate investments and the proposed bundle of policies "offer a comprehensive path to achieving net zero emissions."

The bishops' backing of a $555 billion climate bill that has languished on Capitol Hill for months came via a June 8 letter to members of Congress from Archbishop Paul Coakley, chairman of the Committee on Domestic Justice and Human Development of the U.S. Conference of Catholic Bishops.

"This is a critical moment to pass climate legislation if the United States is to meet Paris Agreement emissions reduction goals, and I once again ask you to work toward policies that will help promote care for creation and those on the margins of society, respecting the rights and dignity of every human life," Coakley wrote.

The letter is the latest push from U.S. Catholics for Congress to pass the hundreds of billions of dollars in climate provisions, once included in the now-idle Build Back Better Act, that form the backbone of the U.S. emissions reduction pledge under the Paris Agreement. In May, hundreds of Catholics met with more than a dozen senators requesting their "yes" vote on a comprehensive climate package.

For more than a year, President Joe Biden and fellow Democrats in Congress have sought to pass major climate legislation as part of a budget reconciliation bill that could move through the Senate with a simple majority vote, bypassing a likely filibuster by Republicans who have been steadfastly opposed.

In November, the U.S. House of Representatives passed on party lines the Build Back Better Act, a $2 trillion comprehensive social programs bill that included $555 billion in climate investments over a decade, among them: tax credits for clean energy projects, electric vehicles and energy efficiency upgrades; funds to boost climate resilience and adaptation; a fee on methane emissions; assistance for communities most impacted by pollution and climate change; and the creation of a Civilian Climate Corps. Together, the policies make up the bulk of the Biden administration's Paris Agreement commitment to cut national emissions by at least 50% from 2005 levels by 2030.

The climate investments — which would be the nation's largest to address climate change — remain part of talks by congressional Democrats seeking to revive a scaled-down version of the Build Back Better Act, which was sunk in December after Sen. Joe Manchin of West Virginia stated he could not support it.

Many view the current window as the last chance for years for significant climate legislation to pass through Congress, with the possibility that Republicans take control of the House, Senate, or both, in the midterm elections in November.

Adding urgency to the deadline are projections from scientists that actions this decade are vital for the world to substantially slash global greenhouse gas emissions — by at least 45% by 2030 — to have a chance to meet the Paris accord goal to limit average global temperature rise to 1.5 degrees Celsius and avert far more dangerous flooding, droughts, wildfires and storms expected to accompany greater warming.

"This is a critical time for investments in climate mitigation, adaptation, and innovation," Coakley wrote to lawmakers, adding the House-passed bill's $555 billion in climate policies "was encouraging since those policies offer a comprehensive path to achieving net zero emissions."

He said the United States "has a distinct responsibility to address climate change" as the world's leading historical source of greenhouse gas emissions and among the present-day leaders in both emissions and energy use. 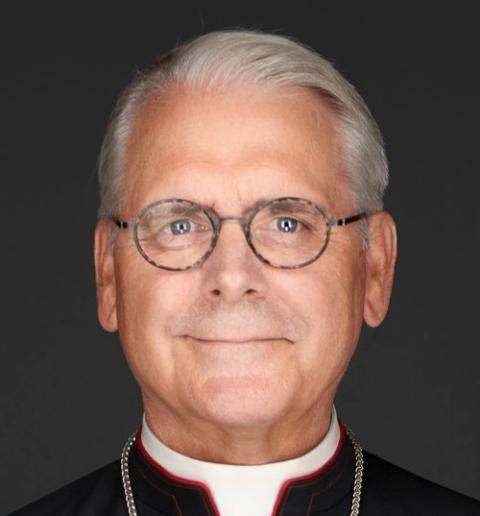 Archbishop Paul Coakley of Oklahoma City, seen in an undated photo, sent a letter June 8 to members of Congress urging support for federal legislation that would direct $555 billion to address climate change. He is chairman of the USCCB's Committee on Domestic Justice and Human Development. (CNS/courtesy Archdiocese of Oklahoma City)

The Oklahoma City archbishop, from a state rich in oil and gas, quoted Pope Francis' 2015 encyclical "Laudato Si', on Care for Our Common Home" where the pope outlined "an urgent need to develop policies so that, in the next few years, the emission of carbon dioxide and other highly polluting gases can be drastically reduced, for example, substituting for fossil fuels and developing sources of renewable energy."

"Care for creation, and especially the climate which affects all life on earth, is integral to the care for humanity," Coakley wrote.

He called immediate deployment of renewable energy, such as through the $320 billion in clean energy tax credits in the bill, among the most cost-effective and impactful steps the country can take, and said widespread electrification, including in vehicles, is "essential" for meeting emissions reductions goals. With that, he said it is important to support further research and development around energy storage, upgrading nuclear facilities and hydrogen cells, and the use of carbon capture to remove already emitted gases from the atmosphere.

'Care for creation, and especially the climate which affects all life on earth, is integral to the care for humanity.'
— Archbishop Paul Coakley

Coakley added it was critical that no one is left behind in the transition to clean energy. He applauded the bill's $20 billion investment in rural electric cooperatives and agricultural conservation, and urged special attention be given to communities historically disadvantaged by the effects of climate change and those whose livelihoods have depended on the extraction and mining of fossil fuels.

The Oklahoma archbishop also lent his fellow bishops' support to changes in the tax code and reforms in prescription drug pricing that would offset the cost of climate investments.

In addition to the letter to Congress, the U.S. bishops' conference recently issued an action alert encouraging all Catholics to ask their elected representatives to pass the $555 billion in climate measures. Both follow up on several letters the bishops' conference has sent to Congress in the past year that have supported climate legislation.

The Catholic Climate Covenant in May organized more than 800 Catholics to meet with senators, both Democrats and Republicans, from at least 26 states. Additional phases of the "Encounter for Our Common Home" campaign are expected to be announced later in the summer. Interfaith groups have also rallied the nation's religious communities around the potentially historical climate legislation.

The bishops’ call to Congress comes amid voices within the church also calling for them to elevate climate change and environmental degradation among their priorities, with some young Catholics taking complaints about their bishops' climate silence directly to the pope. Others have urged bishops to commit to net-zero emissions within their own dioceses.

In his letter, Coakley told Congress that "Investments today will determine the range of options, economic outcomes, and the well-being of human life and all of creation for years to come."

"As Pope Francis asks, so must we ask ourselves, 'What kind of world do we want to leave to those who come after us, to children who are now growing up?' "

A version of this story appeared in the June 24-July 7, 2022 print issue under the headline: Bishops press Congress to pass climate legislation.