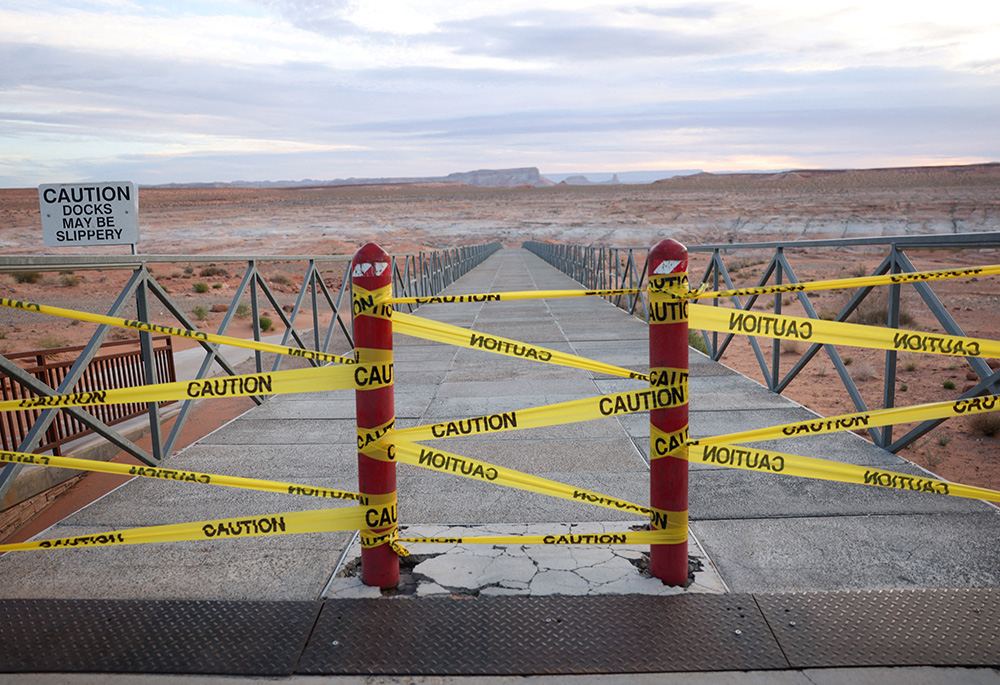 With prospects for substantial climate change legislation fading as midterm elections draw closer, a major Catholic campaign is bringing constituents straight to their senators, including moderate Republicans, in a bid to find the votes, even a single one, needed to pass the $555 billion in energy incentives and emissions-slashing policies included in the now-idle Build Back Better Act.

More than 800 Catholics began meeting with their U.S. senators in the first days of May as part of the campaign, called "Encounter for Our Common Home" and led by the Catholic Climate Covenant. The effort seeks to bring a distinct Catholic voice into the legislative debates that have stalled for months around the approximately $2 trillion bill spent over the next decade once considered the backbone of President Joe Biden's domestic social agenda, not just on climate change but also on child care, health care, affordable housing and more.

The half-trillion-dollar climate provisions — which are under negotiations as part of a scaled-down bill and include tax credits for clean energy, electric vehicles and energy efficiency upgrades — represent the largest federal investments on addressing climate change in U.S. history. Many environmental advocates see this current window, despite legislative setbacks so far, as the best chance for Congress to pass major climate legislation since the failed Waxman-Markey cap-and-trade bill in 2009.

"Recognizing we may not have another opportunity come midterms for any substantive climate legislation, now it's absolutely the time for us to be speaking from a prophetic point of view," said Jose Aguto, executive director for Catholic Climate Covenant.

The "Encounter for Our Common Home" campaign is the most coordinated effort by Catholics to date to support the climate legislation under Build Back Better. Interfaith coalitions have taken up several initiatives of their own over the past year. 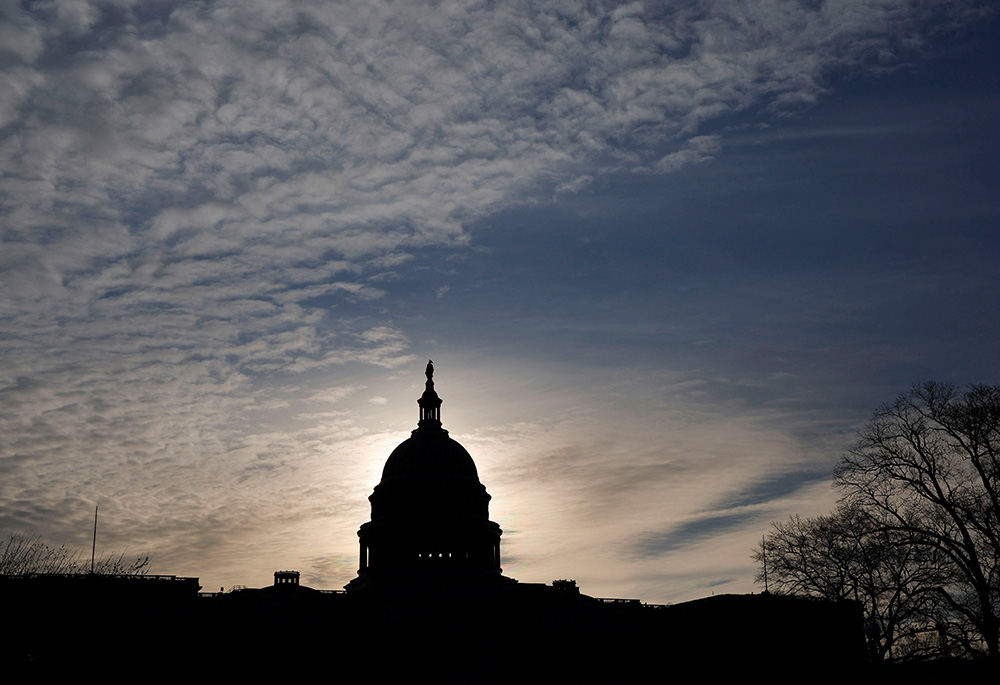 The U.S. Capitol in Washington is seen during sunrise March 1. (CNS/Jonathan Ernst Reuters)

Aguto told EarthBeat the scale and strategy of the campaign "doesn't compare" to past advocacy and lobbying efforts by the Covenant. A total of 867 Catholics from 47 states, Puerto Rico and Washington, D.C., have signed up, with meetings scheduled with senators from at least 26 states. The first phase of delegation meetings began May 2 and will continue throughout the month.

Among those confirmed are meetings with Senate Majority Leader Chuck Schumer and Kirsten Gillibrand of New York, along with both senators from Pennsylvania, Florida, Connecticut and Virginia; Sen. Mike Braun of Indiana; Sen. Mike Lee of Utah; Sen. Jon Ossoff of Georgia; and Sen. Rob Portman of Ohio.

Campaign organizers hope these first meetings will lead to more conversations. They have prioritized face-to-face interactions, whether in person or virtual. The effort also has solicited more than 3,000 emails and faxes to senators.

The "Encounter for Our Common Home" campaign draws inspiration from Pope Francis' words in his 2015 encyclical, "Laudato Si', on Care for Our Common Home," in which the pope stated that "True statecraft is manifest, when in difficult times, we uphold high principles and think of the long-term common good." Organizers also see the initiative as living out calls to advocacy outlined in the Vatican's Laudato Si' Action Platform.

Along with state delegations of Catholics, the Covenant is joined by 10 other national organizations, all of which support the $555 billion in climate provisions and have met weekly on the campaign. Among them are the Catholic Health Association of the United States, the National Catholic Educational Association, Caritas North America, Laudato Si' Movement and the Leadership Conference of Women Religious.

The urgency is driven primarily by two timelines.

The 2022 midterm elections loom in November, giving Biden and Democrats, who currently control both chambers of Congress with razor-thin margins, an ever-closing window to secure a substantial climate package. Democrats have targeted July 4, or as early as Memorial Day, to strike a new deal, The Washington Post has reported.

Along with the politics, scientists have said action this decade to rapidly and substantially reduce heat-trapping greenhouse gas emissions is crucial to put the planet on a path to limit average global temperatures to 1.5 degrees Celsius, and with it avoid the most catastrophic consequences of climate change.

With the Encounter campaign, Catholics plan to focus less on debating the details of the climate provisions or the science of climate change, and instead to highlight church teaching on caring for creation and ask senators to view the legislation not through partisan lenses but in terms of the substantial impact their support could mean for people and the planet today and for generations to come.

"They have the opportunity right now with just one vote," Aguto said.

The original $1.7 trillion Build Back Better bill faded in December, when Sen. Joe Manchin of West Virginia stated he could not support it. Manchin, who is Catholic, has played a central role in the negotiations, as Democrats have sought to pass the legislation through a reconciliation process in the evenly divided Senate that requires a simple majority rather than 60 votes.

Late last month, Manchin began holding bipartisan meetings about a possible energy bill that would avoid reconciliation, though climate activists are skeptical it would yield the same levels of ambition and spending as the Build Back Better provisions that already have passed the House.

So far, the Covenant's Encounter campaign has yet to set up a meeting with the West Virginian Democrat. But organizers have insisted on not focusing their efforts exclusively on Manchin. They have set up meetings with moderate Republicans like Braun, Susan Collins (Maine), Lisa Murkowski (Alaska), Mitt Romney (Utah) and Pat Toomey (Pennsylvania). Of that group, all but Romney are Catholic.

Persuading even one Republican to support the climate provisions appears no simple task. None has voiced support for the climate pieces of Build Back Better as the bill was debated last year, and for years Republicans as a whole have not been inclined to support climate legislation.

"We feel like there's an opening. But to be perfectly honest, it's gonna be tough," said Michelle Knight, of Erie, Pennsylvania, who was part of a 10-person group that met with Toomey on May 2.

A delegation of roughly 60 Indiana Catholics met May 4 virtually with Braun, a major focus for the campaign given his faith background and position as co-chair of the bipartisan Senate Climate Solutions Caucus.

Benedictine Sr. Jean Marie Ballard of Evansville told EarthBeat after the meeting that "our presence spoke volumes to the senator and his staff," who indicated it was the largest state group to meet with Braun. She took it as a hopeful sign that the senator expressed a willingness to meet with a smaller group in the future. 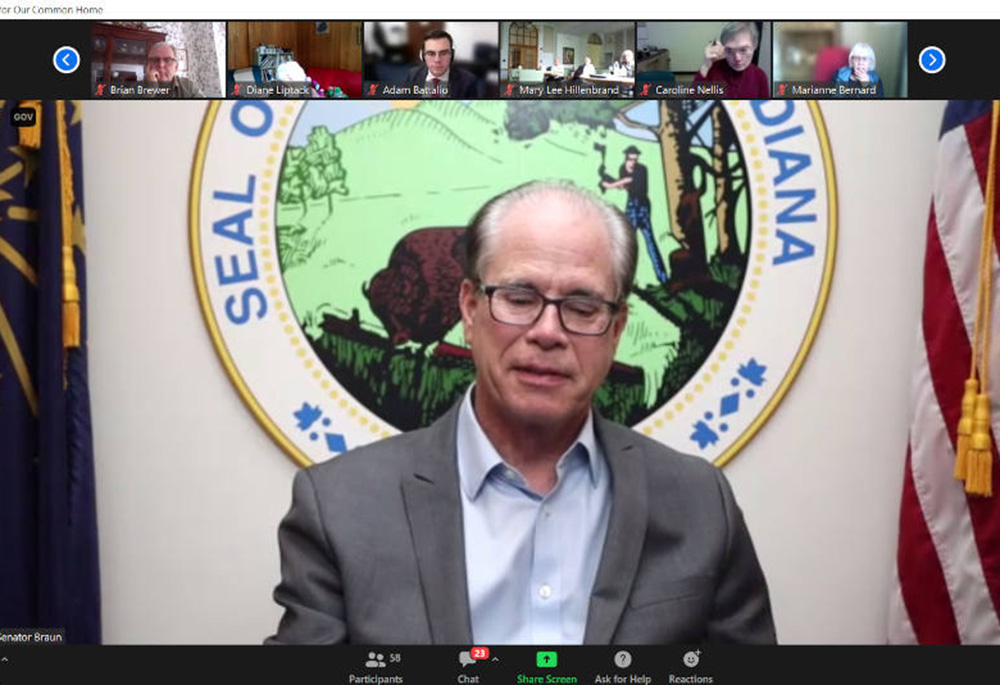 Sen. Mike Braun of Indiana meets virtually with a delegation of roughly 60 Indiana Catholics May 4. Braun is a major focus for the Encounter for Our Common Home, given his faith background and position as co-chair of the bipartisan Senate Climate Solutions Caucus. (Courtesy of Indiana Catholics for Creation)

Many of the participants were part of a group called Indiana Catholics for Creation. In addition, a representative from the Indiana Catholic Conference, the policy arm of the state's bishops, joined. Indianapolis Archbishop Charles Thompson also issued a letter of support to the senator.

Alexander Mingus, Indiana Catholic Conference associate director, acknowledged there's some added pressure on their group knowing that Braun could be a "key player." He added they hope to address the senator's concerns with the potential costs, and to frame it as an investment now that would ultimately limit government spending down the road. In 2021, for example, the U.S. experienced its second-most billion-dollar weather-related disasters, costing more than $145 billion in all.

"We're trying to look at this meeting as something that isn't just a one-time effort and done, but rather the cultivation of a relationship," Mingus said, adding the group had low expectations that their initial meeting alone would sway the senator to vote "yes."

Ahead of the meeting, Ballard told EarthBeat the group hoped to convey the "moral imperative" to take action now, how acting on climate change fits into being pro-life and to show Catholic support and encouragement for the senator to go beyond partisanship and vote from his faith convictions.

"[We need to] impress upon him that we need him to act for the good of all people. What is he leaving to his grandchildren and for all the folks that come after him? He's in a position to help leave the world in a better shape than it is right now," the Benedictine sister said.

Related: We must choose leaders who take all threats to life seriously, including climate change

In meetings with Virginia senators Mark Warner and Tim Kaine, Catholics urged the two Democrats to speak with their Republican colleagues about climate change in pro-life terms, that rising temperatures pose a threat to more than polar bears and glaciers.

"The message I hope to deliver to both Sens. Kaine and Warner is that the window for us to slow or reverse climate change is closing rapidly and therefore it is imperative that we act now and do so in a substantive manner. If we don't get this right, there are no do-overs and the consequences will be devastating for all forms of life," said Diane Koropchak, a parishioner at Our Lady of Nazareth Church, in Roanoke, Virginia.

In their meeting with a staffer from Toomey's office, Pennsylvania Catholics talked about how the faith they share with the senator compels them to press for a major federal climate package now. They see an opening with Toomey, too, in that he's retiring after this year, perhaps untethering him some from party positions, and that he has shown a willingness to do so in the past — specifically on gun control after the Sandy Hook mass shooting by co-sponsoring a bill with Manchin.

Like other state delegations, Knight hopes the first meeting is a start of continued conversations on the need for federal climate action this year.

"I did feel like the door was left open," Knight said, before adding "whether they're open to hearing the content of what we're saying, I'm still very uncertain about that."

This story appears in the 2022 midterm elections feature series. View the full series.
A version of this story appeared in the May 27-June 9, 2022 print issue under the headline: Catholic campaign encounters senators to save climate legislation.