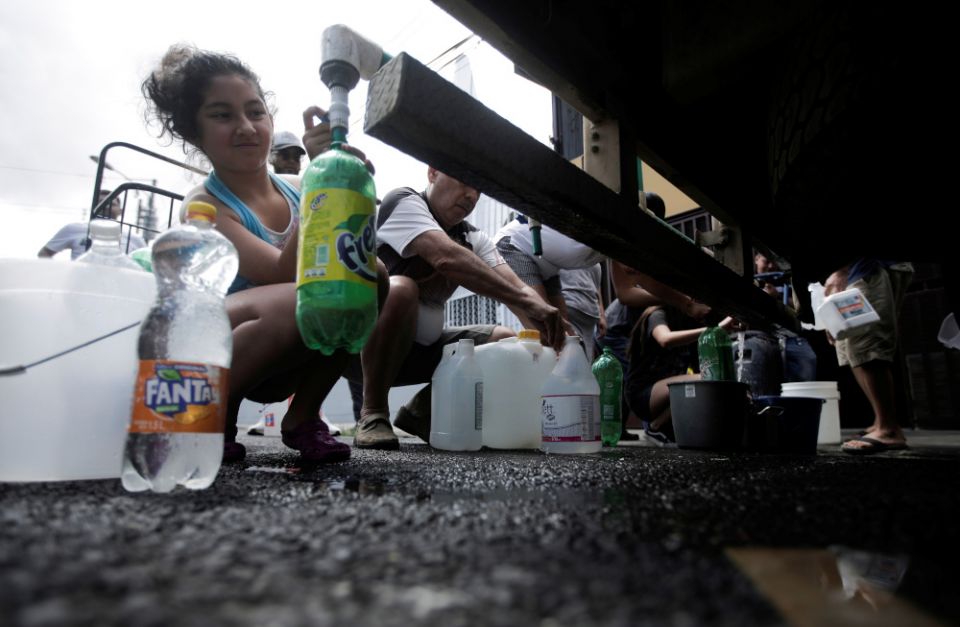 People collect clean drinking water from a tanker sent by government authorities as part of measures to help prevent the spread of the coronavirus in San Jose, Costa Rica, March 14, 2020. The Vatican said defending the right to clean water is part of the Catholic Church's promotion of the common good. (CNS/Reuters/Juan Carlos Ulate)

Vatican City — Access to clean water is an essential human right that must be defended and protected, the Vatican Dicastery for Promoting Integral Human Development said in a new document.

Defending the right to clean water is part of the Catholic Church's promotion of the common good, "not some particular national agenda," the dicastery said, calling for "a management of water so as to ensure universal and sustainable access to it for the future of life, the planet and the human community."

The 46-page document, titled "Aqua fons vitae, Orientations on Water: Symbol of the Cry of the Poor and the Cry of the Earth," was released by the Vatican March 30.

The preface, signed by Cardinal Peter Turkson, dicastery prefect, and Msgr. Bruno Marie Duffe, secretary of the dicastery, stated that the current coronavirus pandemic has shed a light on "the interconnectedness of everything, be it ecological, economic, political and social."

"The consideration of water, in this sense, clearly appears to be one of the elements that heavily impacts 'integral' and 'human' development," the preface stated.

Water, the preface said, "may be abused, rendered unusable and unsafe, polluted and dissipated, but the sheer necessity of it for life — human, animal and plant — requires us, in our different capacities as religious leaders, policymakers and legislators, economic actors and businessmen, rural subsistent farmers and industrial farmers etc., to jointly show responsibility and exercise care for our common home."

In a statement published March 30, the dicastery said the document was "rooted in the social magisterium of the popes" and looked at three main aspects: water for human use; water as a resource for activities such as agriculture and industry; and bodies of water, including rivers, underground aquifers, lakes, oceans and seas.

Access to water, the document said, "can make the difference between survival and death," especially in poor areas where drinkable water is in scarce supply.

"While significant progress has been made in the last decade, approximately 2 billion people still have inadequate access to drinking water, which means irregular access, or access that is too far away from their home, or access to polluted water, which is therefore not suitable for human consumption. Their health is directly threatened," the document said.

Despite the United Nations' recognition of access to water as a human right, in many poor countries, clean water is often used as a bargaining chip and as a means of exploiting people, especially women.

"If authorities do not adequately protect citizens, it happens that officials or technicians in charge of supplying water or reading the meters take advantage of their position to blackmail people unable to pay for water (typically women), demanding sexual intercourse in order not to interrupt the supply. This type of abuse and corruption is called 'sextorsion' in the water sector," the dicastery said.

Ensuring the church's role in promoting access to drinkable water for all, the dicastery urged government authorities to enact laws and structures that are "at the service of the right to water and the right to life."

"Everything must be done in the most sustainable and equitable way for society, the environment and the economy, while allowing citizens to seek, receive and share information about water," the document said.

The use of water in activities such as agriculture is also threatened due to environmental pollution and exploitation of resources which subsequently harm the livelihood of millions of people and cause "poverty, instability and unwilling migrations."

In areas where water is a critical resource for fishing and agricultural purposes, the document said that local churches must "always live according to the preferential option for the poor, that is, when pertinent, not to limit herself to being a neutral mediator, but take sides with those who suffer most, with those who are most in difficulty, with those who have no voice and see their rights trampled or their efforts frustrated."

Finally, the increasing pollution of the world's oceans particularly due to activities such as mining, drilling and extractive industries as well as global warning also poses a significant threat to humanity.

"No nation or corporation can appropriate or manage this common inheritance in a specific, individual or sovereign capacity, hoarding its resources, trampling under foot international law, avoiding the obligation to safeguard it in sustainable ways and to make it accessible to future generations and ensure the survival of life on Earth, our common home," the document said.

Local churches, it added, "can usefully build awareness and solicit an effective response from legal, economic, political leaders, as well as individual citizens" to safeguard resources that are "an inheritance that must be protected and passed on to future generations."

The dicastery said that education, particularly in Catholic institutions, can help inform people of the importance of promoting and defending the right to access clean water and build solidarity among people to protect that right.

"Water is a fabulous element with which to build such relational bridges among people, communities and countries," the document said. "It can and should be a learning ground for solidarity and collaboration rather than a trigger of conflict."