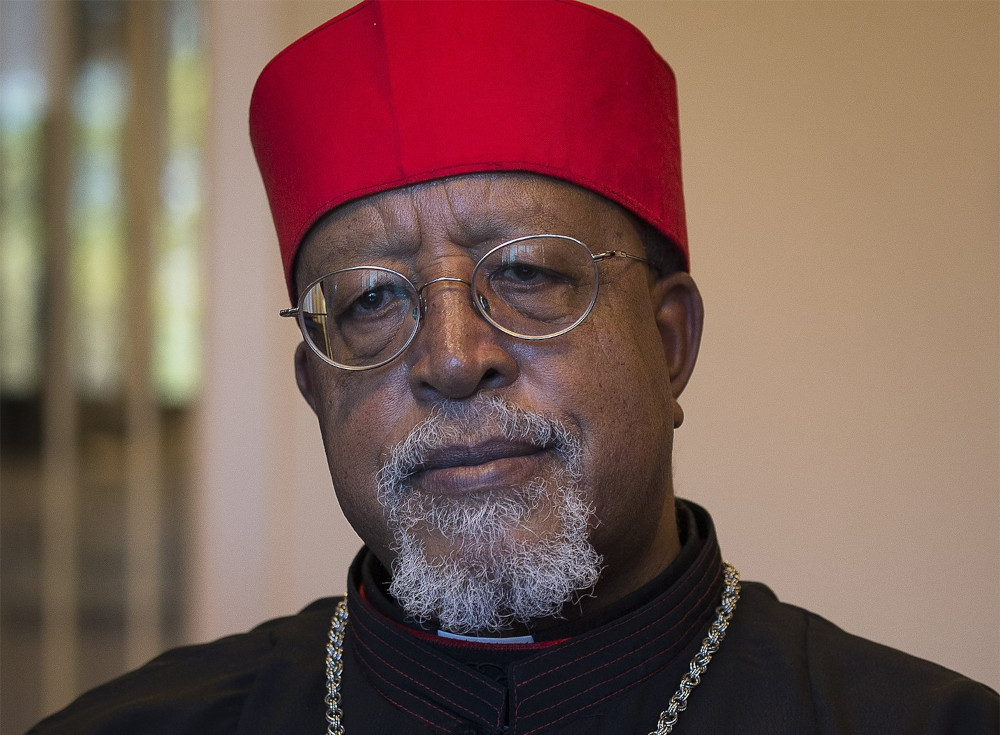 Ethiopian Cardinal Berhaneyesus Souraphiel of Addis Ababa is pictured at the headquarters of the U.S. Conference of Catholic Bishops in Washington Oct. 24, 2019. (CNS photo/Tyler Orsburn)

Ethiopian Cardinal Berhaneyesus Demerew Souraphiel has welcomed a peace agreement that the government and Tigray forces signed to end the war in the country's northern region.

After 10 days of talks in South Africa, the two sides signed the pact Nov. 2, after nearly two years of conflict. But on the opposite end of the continent, in Ethiopia's semi-autonomous region of Tigray, the guns were still firing amid an escalating humanitarian crisis.

"We hope the agreement ... will lead our peoples toward unity and peace," Souraphiel, the archbishop of Addis Ababa, said in a brief statement. "To ensure sustainable peace throughout the country, I urge you to promote a spirit of closeness and reconciliation among our people and enable the displaced to return to their homes."

"To learn life from Jesus and the saints, the seed of peace must die before it sows and bears fruit. Peace is not achieved by a defeatist principle, it does not know anything but a spirit of humility and forgiveness," said the cardinal.

The agreement includes a permanent cease-fire, which includes cessation of covert and overt violence, laying of land mines, sabotage and airstrikes.

The agreement mandates the government to provide humanitarian aid -- in collaboration with humanitarian agencies -- and facilitate the return and integration of refugees and people displaced within Ethiopia. It also recommends rapid disarmament of fighters from the Tigray People's Liberation Front.

At the same time, it mandates the rebels to respect the authority of the federal government, its constitutional bodies and its organs. The government is expected to halt all military operations targeting the TPLF and restore essential services in the Tigray region.

According to analysts, if the pact is respected, it holds the highest chance of ending the war in the populous Horn of Africa region.

The war and resulting food insecurity have killed an estimated 500,000 people and displaced millions in the region of an estimated 5 million people.