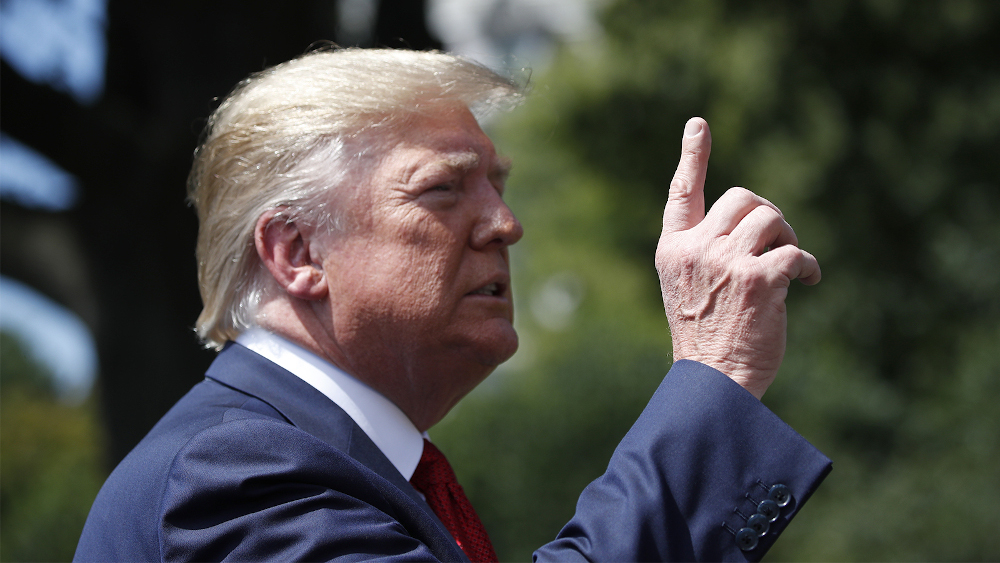 President Trump speaks with reporters before departing on Marine One on the South Lawn of the White House in Washington on Aug. 21, 2019. (AP Photo/Alex Brandon)

Does President Trump have a Messiah complex? No, according to some of his most loyal evangelical Christian supporters — but one could see how he might get the idea that he is here to save the world.

On Wednesday morning (Aug. 21), Trump tweeted a long quote from an admirer who claimed that Israeli Jews love the president like "the King of Israel" and that he is the "second coming of God." The comments — from libertarian talk show host Wayne Allyn Root, known for his support of conspiracy theories — were an apparent attempt to defend the president after he said the day before that American Jews who vote for Democrats show "either a total lack of knowledge or great disloyalty."

But when, just hours later, Trump pronounced himself "the chosen one" during a discussion with reporters about China and trade, it seemed to unnerve even his evangelical base. It also sent "King of Israel," "King of the Jews" and "antichrist" trending on Twitter in the United States.

By Thursday, some evangelical leaders were reassuring followers that Trump had no delusions about the nature of his mission. Robert Jeffress, pastor of First Baptist Church in Dallas and an adviser to the White House, said in a radio interview, "He does not see himself as the Messiah."

Other religious thinkers fretted the president is all too ready to accept the role of savior.

"The King of Israel? The second coming of God? He thinks he's Jesus. That's where we are," tweeted Diana Butler Bass, a scholar specializing in American religion and culture.

Whether he is consciously claiming a mantle of God's favor, or simply trolling opponents who might otherwise find other, more substantive theological quarrels with his policies, Trump has long been at the center of apocalyptic speculation about a presidency that gives hope to some and causes others to cry blasphemy.

Herewith, a primer on the eschatological and political implications of this week's biblical back-and-forth.

Who is "the chosen one"?

Somebody had to take on China on trade, Trump told reporters Wednesday.

"I am the chosen one," he said, glancing heavenward with outstretched hands.

Bass tweeted that the phrase refers to Isaiah 42:1: "Behold, My Servant, whom I uphold; My chosen one in whom My soul delights I have put My Spirit upon Him; He will bring forth justice to the nations." Christians understand the Bible verse as a prophecy referring to Jesus.

"The chosen one" isn't necessarily a biblical concept, said John Fea, professor of American history at Messiah College. It also has been used to refer to everyone from basketball star LeBron James to fictional wizard Harry Potter.

But in the context it's difficult to ignore, Fea said.

Many of Trump's evangelical supporters, as well as Israeli Prime Minister Benjamin Netanyahu, have expressed a belief that God chose Trump to be president, comparing him to the biblical figure of Cyrus, the secular king God used to rebuild Jerusalem.

Is "King of Israel" even a thing?

The Hebrew Bible records that for four centuries the early Israelites were ruled by a king, initially under a united kingdom, later under divided Northern and Southern kingdoms.

But the term "King of Israel" most always refers to King David, the greatest of the kings, who made Jerusalem his capital. Centuries after his rule — about 1000 to 975 years before Jesus — Jews longed for a restoration of their kingdom. They suffered greatly under a series of foreign rulers and hoped that one day Israel would regain its former glory.

For that reason, Jews later came to believe that the future redeemer of the Jewish people would come from a Davidic lineage.

Jesus, whose Davidic lineage is laid out in the New Testament, is sometimes called "King of Israel" in the Gospels, and sometimes "King of the Jews."

But Jews believe the Messiah has not yet come or may never come. Belief in the Messiah is mostly part of certain Orthodox Jewish traditions such as Lubavitch, where some believe Rabbi Menachem Mendel Schneersohn may be the Messiah who will return to earth to complete the messianic task of perfecting the world. Reform Judaism, the largest of the U.S. Jewish branches, has long denied that there will be an individual Messiah.

Modern-day Israelis who support Netanyahu have sometimes referred to him as the "King of Israel," a compliment that Netanyahu's opponents find offensive.

Root's boast that Trump is the "second coming of God" or some other divinely sent boon to Israel or Jews there or in the United States seems misplaced at best.

Why does this strike a chord with some Christians?

Trump's tweets about being the "King of Israel" and his offhand remark about being the "chosen one" have also taken some Christians aback. But they may appeal to some who subscribe to two obscure, but recently fashionable, strains of Christian thought.

The first connects to dispensationalism, an old Christian theology with a variety of interpretive strains, but which often holds that the return of Jewish people to Israel is a harbinger of Jesus Christ's return that could set in motion the end times. Dispensationalism, which is often connected to a concept of the rapture, got a boost from the "Left Behind" book series popular in the 1990s.

Some pastors connected with dispensationalism have been associated with Trump since he took office, including John Hagee, pastor of Cornerstone Church in San Antonio, and Robert Jeffress, pastor of the First Baptist Church of Dallas. Hagee, who also heads the group Christians United for Israel, has written extensively about the role of Israel in prophecy, and Jeffress referenced Genesis 12 — in which God says of Israel, "I will bless those who bless you, and the one who curses you I will curse" — after the Trump administration announced it would recognize Jerusalem as Israel's capital and move the U.S. Embassy there from Tel Aviv.

Both men spoke at the 2018 ceremony to mark the embassy move. (Jeffress was careful to note that he did not believe the move would necessarily bring about the end times.)

Dispensationalist theology sometimes overlaps with a separate belief that has emerged in recent years known as the "Trump prophecy" — the idea that Trump's political ascendancy is ordained by God. Some approach the idea in a more roundabout way: Trump adviser and Florida pastor Paula White argued in 2017 that Trump's presidency was "anointed" by God.

White later clarified that she believes all presidents are lifted up to leadership by God, but for some, Trump truly is God's "chosen one."

A 2018 film produced with the help of faculty and students at Liberty University highlighted how Mark Taylor, a former firefighter, claims he received a spiritual message in 2011 that declared "The Spirit of God says I've chosen this man, Donald Trump, for such a time as this."

Similarly, Lance Wallnau, a self-proclaimed prophet who appears in the film, once declared Trump "God's Chaos Candidate," predicted he would become president and claimed God told him that "Donald Trump is a wrecking ball to the spirit of political correctness."

The film goes on to liken Trump (again) to King Cyrus. Trump, by extension, is believed by some to be a leader who, while perhaps not as theologically or morally upright as many would hope, remains a modern-day savior of God's people.

Why was "antichrist" trending after Trump called himself  "the chosen one?"

After Trump's remarks Wednesday, "antichrist" began trending on Twitter in the U.S.

Many of those tweets alluding to Trump as the Antichrist seemed tongue-in-cheek. "Left Behind" jokes abounded.

But it's not unusual for U.S. presidents to earn comparisons to the end times harbinger.

Gerald Burton Winrod, a pro-Nazi evangelist from Kansas, has been credited with starting the trend with his criticism of former President Franklin D. Roosevelt. It's been applied to nearly every president since, including a particularly egregious email campaign targeting then-Sen. Barack Obama when he was running for president.

In many ways, naming the Antichrist always has been a political tool to demonize one's opponents, according to Fea. Nobody names a leader who agrees with his or her political beliefs.