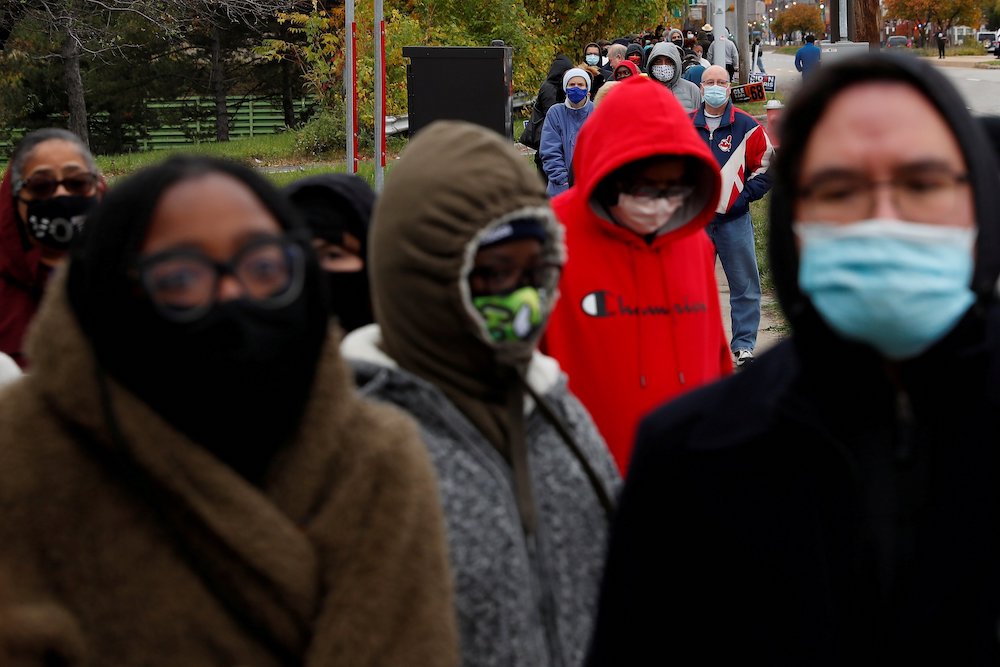 At a time when some voters are waiting more than 10 hours to cast their ballots, poll workers are being warned of far-right militia groups inciting violence to suppress or intimidate voters, and President Donald Trump has repeatedly refused to say whether he'll accept election results if they don't go in his favor, more than 1,000 faith leaders have signed an open letter calling for a "fair and free election."

"America is only as strong as its people's commitment to our democracy and the freedoms and rights it ensures," states the letter, which was released on Oct. 27 by a range of clergy leaders, religious activists and scholars, including Catholics.

The letter enumerates four areas of concern: ensuring free and fair elections for all Americans; the counting of every valid vote before the election is decided; a commitment of leaders to share relevant information to avoid spreading misinformation; and a peaceful transition of power.

"I think there's a special responsibility on Christians looking at the potential of a chaotic, disruptive situation" in this election, said Stephen Schneck, executive director of the Franciscan Action Network who also signed the letter.

Leadership from the faith community ahead of the election makes perfect sense, he believes, as "there's a special onus on Christians to engage in political life with an effort at maintaining peace and order."

For that reason, over the last year, a diverse coalition consisting of religious sisters, African American clergy, legal scholars and practitioners, community activists and a network of field workers have united with a shared purpose: protecting the right to vote for all — and the ensuing results.

Their tactics are both spiritual and practical.

"Our goal is to offer a message of steadfastness, calm and faith in our democratic systems."
—Sinsinawa Dominican Sr. Quincy Howard

Sinsinawa Dominican Sr. Quincy Howard, who is also the consulting director of the Faithful Democracy coalition, a network of organizations working to institute a number of democratic reforms, said that one of the group's major initiatives this last month has been the Sacred Season of Voting campaign.

The initiative is using the holy days of every major religious tradition to help ground voters in their faith to help them realize that, as Howard told NCR, "a higher power is at work." The goal of this, said Howard, is to help "push back against the tendency to get sucked into the weeds and freak out" when it comes to possible worst-case scenarios of potential election outcomes.

"Our goal is to offer a message of steadfastness, calm and faith in our democratic systems," said Howard, who believes that doing so through a diverse, multi-faith coalition offers "a powerful picture of unity" to a divided country.

Another goal, according to Jason Miller, director of campaigns and development at the Franciscan Action Network and a member of the Faithful Democracy coalition, has been to help target people of faith on social media and let them know that voting by mail is safe and to also assure them that the results of the election may not be known on election night.

In the swing state of Ohio, Sara Benitez, vice president of organizing and campaigns for Faith in Public Life, said their operations are helping train a group known as "peacekeepers" that will be on call to respond to any voter intimidation efforts and will be trained in deescalation strategies.  In addition, Benitez told NCR that she's working with lay leaders and clergy on a number of fronts, including organizing poll watching and practical support such as providing water and personal protective equipment to voters standing in long lines on Election Day.

"If we're each created in the image of God, we believe that every person should be counted,"  she said, adding that this is something that every faith tradition values. For that reason, Benitez also said that she's helping craft specific messaging for pastors to use in their sermons this coming weekend ahead of the election on the value of democracy and the need to count every vote.

While the U.S. bishops have an official position of staying out of partisan politics, last November the bishops' conference launched the "Civilize It" campaign, which includes pastoral resources to help model dignity and civility in parishes, including a pledge for Catholics to commit to civility, clarity and compassion in engaging the debates surrounding the election.

In recent weeks, according to Richard Coll, the executive director of the department of justice, peace and human development for the U.S. Catholic bishops, there has been a serious uptick in interest in the campaign, along with an election novena, launched Oct. 26 that aims to promote faithful citizenship.

Coll also pointed to Pope Francis' encyclical Fratelli Tutti released earlier this month, which he characterized as a "goldmine of wonderful guidance in terms of political life" that provides a roadmap for "respectful dialogue."

Yet when the Supreme Court struck down portions of the Voting Rights Act in 2013, social justice activists, the Rev. Jim Wallis and Rev. Barbara Williams-Skinner realized they needed to strategize as to how clergy might help support voters, particularly in vulnerable polling places where discrimination against minority voters is often rampant.

Their collaboration has led to the initiative known as Lawyers and Collars, which had a trial run in 2018. In the lead up to the 2020 election, it has trained several thousand predominantly African American clergy members to be on site alongside lawyers to monitor election proceedings and combat voter suppression.

"We have a threat of suppression like we've never seen before" Wallis told NCR, saying that the combination of legal experts and clergy make for a "powerful relationship."

"When you involve faith communities in an effort, they just have more reach than really any other piece of our civil society."
—Chris Crawford

One of the biggest champions for faith leaders leading to protect the vote and ensure nonviolence at both the polls and after the election has been Chris Crawford, who has led faith outreach for the National Task Force on Election Crises, a cross-partisan group of experts on election security and promoting free and fair elections.

"When you involve faith communities in an effort, they just have more reach than really any other piece of our civil society," he told NCR, adding that "you can't do anything really effectively in our public life without engaging our faith communities."

"Religious leaders are some of the most trusted leaders in our country, and in event of a crisis, especially when people are not trusting their politicians, they will be turning to other leaders who they trust," said Crawford.

While most faith communities are already under-resourced due to the global pandemic, he is encouraging faith leaders of every persuasion to do what they can to promote the importance of a functioning democracy in the final week of this campaign. 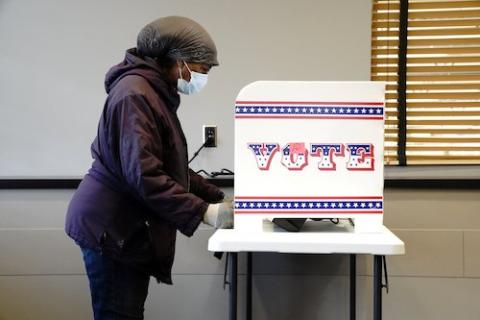 A voter in Milwaukee Oct. 20 ahead of the November election (CNS/Reuters/Bing Guan)

"All of our freedoms, including our religious freedom, depend on free and fair elections," he tells them. "If our democracy isn't functioning, you're not going to be able to achieve your goals."

As a Catholic who has been actively engaged in a number of issues, including pro-life concerns and refugee resettlement, Crawford said he hopes that there can be widespread agreement about this among people of faith from all political persuasions.

"Every individual person matters, and, in that sense, in the United States, you have a right to vote. You have a voice. That's why I care about this," he said.

As for what he's expecting of Catholic Church leaders — especially in a worst-case scenario — he said the new few weeks will be revealing.

"If there's a clear winner and the loser refuses to concede, there will be a moment when the bishops' conference and leaders across religious traditions will need to step up and be clear about protecting our institutions," he warned.

For now, he cites the title of the bishops' 2018 pastoral letter against racism, "Open Wide Our Hearts," and said in that same spirit, "our voting system has to be open to everyone."

"That's a message they [the bishops] can hammer home, and I'd love to have them amplify that," he said.