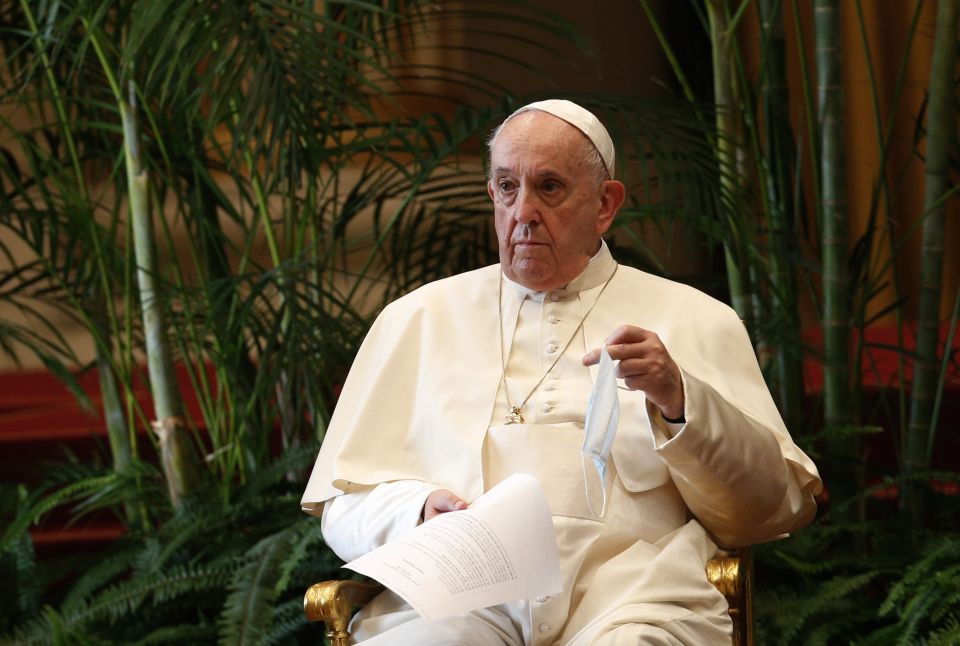 Pope Francis holds a text and his mask during the meeting, “Faith and Science: Towards COP26,” with religious leaders in the Apostolic Palace at the Vatican Oct. 4, 2021. The meeting was part of the run-up to the U.N. Climate Change Conference, called COP26, in Glasgow, Scotland, Oct. 31 to Nov. 12, 2021. (CNS photo/Paul Haring)

Vatican City — Greed and selfishness, which line the pockets of the few to the detriment of the many, continues to prevail despite the vast amount of wealth in the world, Pope Francis said.

In a message sent Oct. 3 to participants at a meeting hosted by the Pontifical Academy of Social Sciences, the pope said that while it "is possible to end poverty, the powers of this one-track thinking say nothing about the poor, the elderly, the immigrants, the unborn or the gravely ill."

"Invisible to most, they are treated as disposable," he said. "And when they are made visible, they are often presented as an unworthy burden on the public treasury. It is a crime against humanity that, because of this prevailing greedy and selfish paradigm, our young people are exploited by the new growing slavery of human trafficking, especially in forced labor, prostitution and the sale of organs."

According the pontifical academy's website, the Oct. 3-4 workshop, titled "Science and Ethics of Happiness: Caritas, Social Friendship and the End of Poverty," aims to understand the economic and technological inequality in the world in the light of the first beatitude: "Blessed are the poor in spirit."

The pope said that the beatitudes are Jesus' promise of happiness for all men and women. However, while all humans desire happiness, "they differ in their specific judgments" about obtaining it.

Today the notion that has the upper hand, he said, is one that "confuses usefulness with happiness, having a good time with living well and pretends to be the only valid criterion for discernment."

The "immoderate desire to possess wealth," the pope said, has led to "a suffocating materialism" that has increased the suffering of the poor and the exploitation of the planet's natural resources.

Greed in today's world, he added, has sustained "the tyranny of money that guarantees privileges only to a few."

"We can be very attached to money, possess many things, but in the end, we will not take them with us. I always remember what my grandmother taught me: 'The burial shroud has no pockets,'" he said.

Jesus' beatitudes are a "revolutionary paradigm" that propose a "spirit of poverty" rather than the accumulation of wealth and technology as the way toward true happiness, the pope continued.

That spirit, he added, "leads us to use our wealth and technologies, goods and talents in favor of integral human development, the common good, social justice and the care and protection of our common home."

Pope Francis said that although "the globalization of indifference seems to be the prevailing voice," Christians must work to promote the spirit of the beatitudes to "overcome this greed" and "seek a civilization of love."

"Let us ask the Lord to give us his 'spirit of poverty.' Let us look for it, and he will help us find it. Let us knock so that the door of the path of beatitudes and authentic happiness may be opened to us," the pope said.