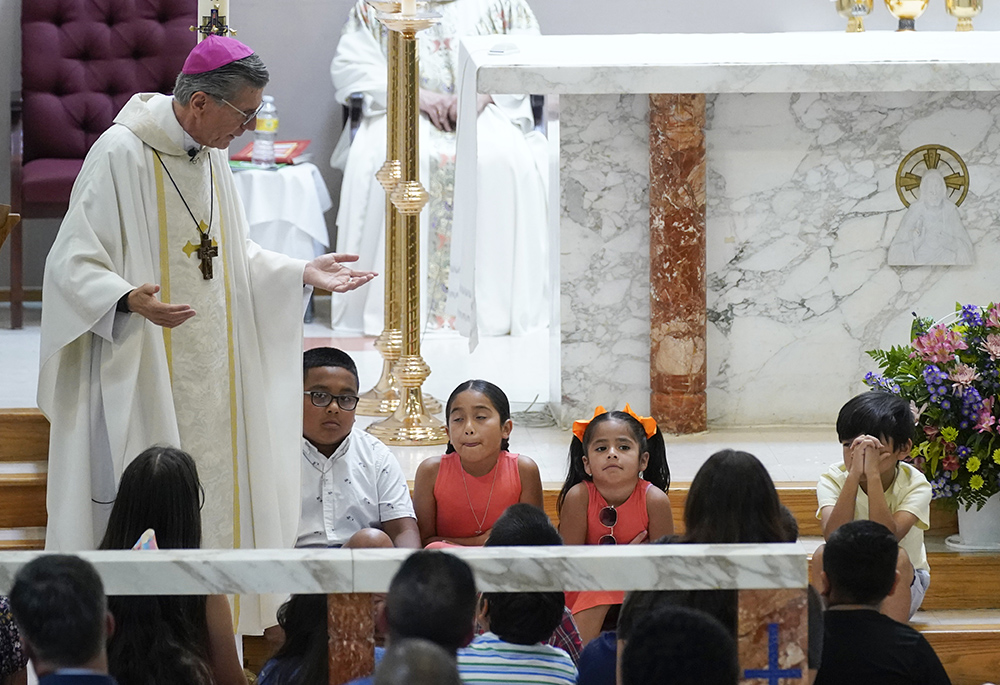 Catholics in the Archdiocese of San Antonio, which encompasses a 27,000-square-mile swath of southern Texas, have endured two enormous tragedies this year: the mass murder of children and teachers in an elementary school shooting in Uvalde in May and the deaths of 53 migrants trapped in a tractor-trailer in June.

Archbishop Gustavo García-Siller, a Mexican American who has headed the archdiocese since 2010, says he has drawn on both the concept of synodality and the presence of God in the Eucharist to lead his community in such a trying time.

In a 45-minute interview with NCR on Nov. 15 on the sidelines of the U.S. bishops' meeting in Baltimore, García-Siller drew a connection between the bishops plans to host a National Eucharistic Revival through 2024 and Pope Francis' agenda for the ongoing Synod of Bishops, which will host assemblies in Rome in October 2023 and October 2024.

"We are in a synodal process centered in the Eucharist," said the archbishop. "It's not like two different things kind of working together."

"The Eucharist is a living experience, and synodality is what happens in the people who receive the Eucharist," he said. "It's beautiful to see."

Speaking in the interview in a mix of English and Spanish, García-Siller gave an example from his experience in San Antonio to frame how he sees ties between the Eucharist and the ongoing synodal process.

The archbishop said he first learned that there had been a school shooting in Uvalde when he was in a meeting with the priests of his archdiocese. He said a prayer and left immediately. 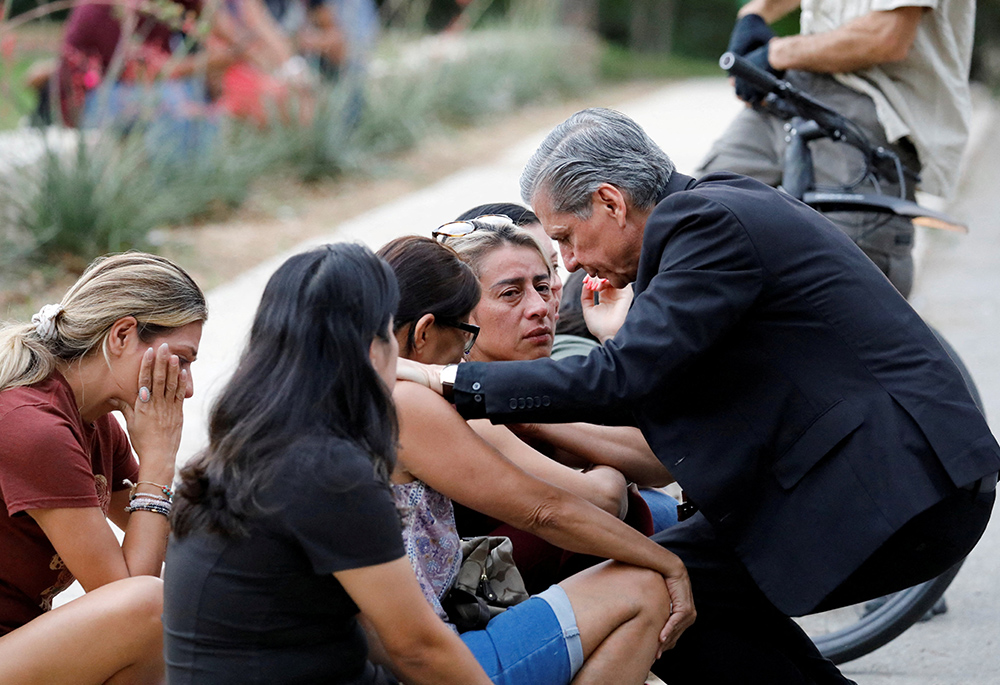 Archbishop Gustavo García-Siller of San Antonio comforts people outside the SSGT Willie de Leon Civic Center, where students had been transported from Robb Elementary School after a shooting May 24 in Uvalde, Texas. (CNS/Reuters/Marco Bello)

After visiting the hospital where some of the student victims were being treated, García-Siller said he went to the civic center where parents were waiting for news of their children, a space that he said was full of quiet crying that was "sour" and "icy."

There he met Joe Garcia, whose wife Irma Garcia had been killed in her classroom, and their children.

Facing the pain of the community, which had lost 19 children and two teachers, García-Siller said, "we need Eucharist." He scheduled a nightly Mass that was well-attended, even by non-Catholics, he said.

At the first of the nightly Masses, García-Siller called the children who were 10 and 11 years old, around the same age as many of the Uvalde victims, to the front. After struggling to get them to talk, García-Siller said he called on the Holy Spirit to help him connect with them. He asked the children to express their feelings with hand gestures and taught them American Sign Language for "peace."

"Sometimes we don't know how to be," said García-Siller. "I didn't have to say much, but to be present in what is happening." 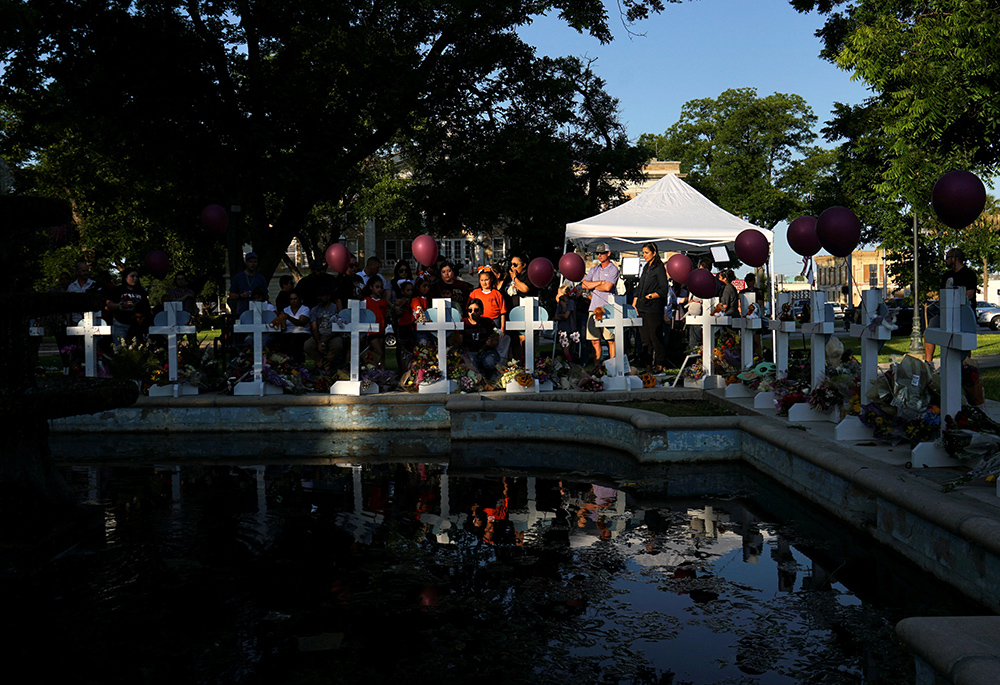 People seen in front the Uvalde County Courthouse May 26 in Texas mourn the victims of the mass shooting at Robb Elementary School. (CNS/Reuters/Veronica G. Cardenas)

As he was facing the incredible tragedy of the violence, Garcia-Siller said that along with the Eucharist, he was carrying the principles of synodality, or what the pope terms a "walking together" among Catholics and their leaders, with him.

The archbishop called Francis' original 2021 announcement of a new global synod process "a big blessing." He said the Archdiocese of San Antonio had already been practicing for years what is known in Spanish as a "pastoral de conjunto," a concept of coordination of ministry that was particularly developed by the Episcopal Conference of Latin America (better known as CELAM) in the 1960s and '70s.

The Fifth National Encuentro of Hispanic/Latino Ministry, hosted by the U.S. church from 2014-18, defined "pastoral de conjunto" as "harmonious coordination of all elements of pastoral ministry, the actions of all the pastoral ministers."

Said García-Siller: "Pastoral de conjunto already moved our leaders to not be isolated and to mission together and, in a way, took us to the communities."

The same week that Francis announced the new synod process, the archbishop said that he created an office in his archdiocese to coordinate synodal work and began to initiate synodal dialogues with Catholics.

García-Siller said he always goes to the periphery first, to "those who like to sit in the back" to "encounter them and to welcome them to express themselves."

He said dialogues were held with incarcerated people, people experiencing homelessness and LGBTQ people, and were hosted in schools, universities and parishes.

While García-Siller struggled to remember the letters that made up the LGBTQ acronym, he said "ellos o elles," using a gender-neutral pronoun in Spanish after the more traditional masculine plural pronoun.

With both the synod and the tragedies this year, the archbishop has had a lot of experience of listening.

García-Siller also celebrated a Mass in San Antonio after he heard about the 53 migrants who died after being abandoned in the back of a tractor-trailer on a 103-degree day.

García-Siller said that, without the celebration of the Eucharist, he and his auxiliary bishops would not have had the opportunity "to be with her at the foot of the cross." 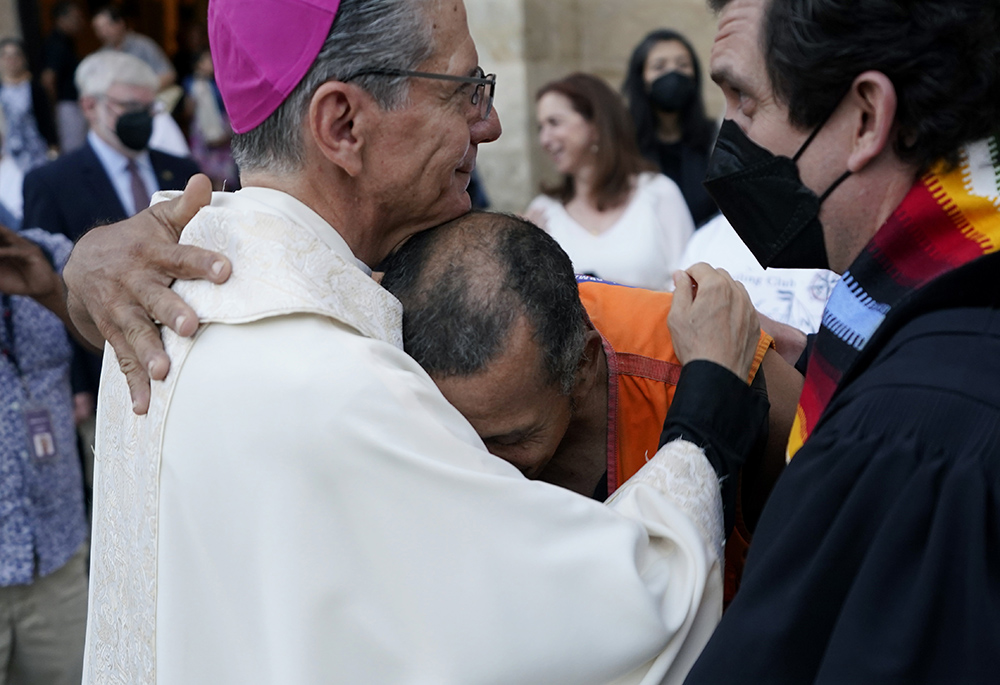 Jose Prin, center, a migrant from Venezuela, is greeted by Archbishop Gustavo García-Siller, left, after a multi-faith memorial Mass and prayer vigil at San Fernando Cathedral to honor the victims and survivors of the human smuggling tragedy, June 30 in San Antonio. More than 50 people died in the human-smuggling attempt. (AP photo/Eric Gay)

In Uvalde, a few days after García-Siller had first rushed to the town after the shooting, the archbishop learned that Joe Garcia, whom the archbishop had met after his wife was killed in the murderous rampage, had himself died of a heart attack.

The archbishop said he asked the Garcias' parish to connect him to Joe and Irma's children. When he arrived at their house, he prayed with about 50 extended family members, but then he asked to spend some time with the four siblings.

García-Siller called again on the Holy Spirit to lead him and then asked the siblings if they had had a chance to talk about what had happened. When they told him they hadn't, he turned to the eldest sibling, Cristian, and asked, "What is in your heart and in your mind that you want to tell your sister?"

"I was there in silence an hour and a half, and the four of them, they were talking about the dreams of their parents," García-Siller said. "It was a synodal process."

García-Siller said he had seen the tragedy from many different angles, and "in all of them could be a way to be present and to connect."

"I met with the police. They were hiding," García-Siller told NCR. "It was a very sad meeting," he said. One officer's wife told García-Siller her husband was depressed and didn't want to go out in public.

"You're in leadership. You need to give the face," García-Siller said he told them, using a literal English translation of a Spanish phrase about facing consequences. 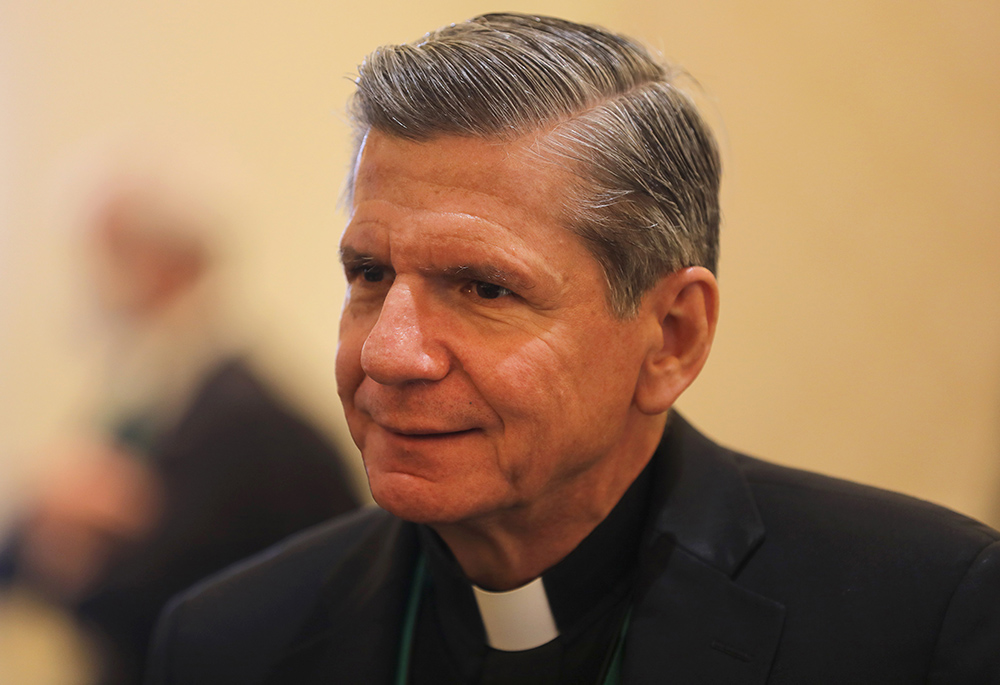 Archbishop Gustavo García-Siller of San Antonio is pictured during a break at a Nov. 16 session of the fall general assembly of the U.S. Conference of Catholic Bishops in Baltimore. (CNS photo/Bob Roller)

"At that time, we didn't have the evidence," the archbishop clarified. After the shooting, news trickled out that police at the scene had delayed about 70 minutes in stopping the attack. A Texas House of Representatives report said no one stopped the gunman because of "systemic failures and egregious poor decision making."

Michael Luis Ortiz, an Uvalde resident and a parishioner at Sacred Heart Catholic Church, has written about how parish leaders, including the priest and deacons, have opposed the protests led by victims' families calling for accountability and change in the leaders of the city, where the protest chant "no justice, no peace" was shouted.

Ortiz wrote that his parish priest criticized the use of the "no justice, no peace" phrase, which has long Catholic roots, in an August homily. Ortiz called this "jarring." He also wrote that a deacon had cited Canadian psychologist and right-wing figure Jordan Peterson and called for the community to "temper our tongues" in another August homily.

When asked about criticisms of that slogan, García-Siller said calls for quiet and an end to protests "would not be peace as we understand Christian peace" because they do not acknowledge what has happened.

García-Siller said he has blessed a protest in Uvalde. "If you're in pain," he said, "you can demonstrate your pain."

"We need to change individually and collectively to face whatever we are going to face in our lifetime," he said.

A version of this story appeared in the Dec 23, 2022 - Jan 5, 2023 print issue under the headline: Archbishop García-Siller speaks about a year of tragedies.