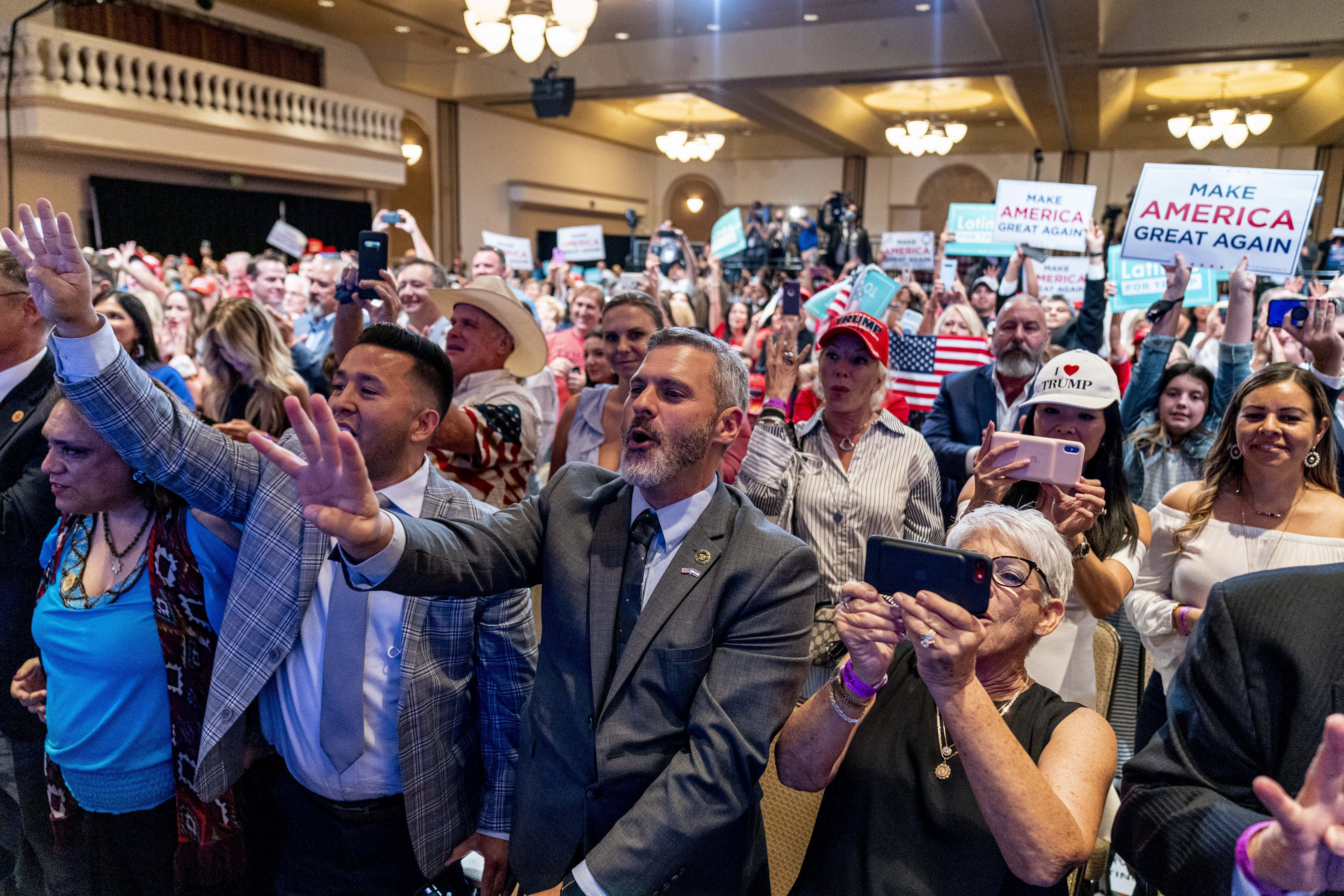 Paul Gonzales promised his wife he wouldn't vote for Donald Trump in 2016. But the 60-year-old salesman in the Phoenix suburb of Mesa voted for him anyway and said he plans to do it again next week.

Gonzales said he's drawn to what he sees as Trump's alignment with Christian values and his economic record prior to the pandemic.

"He's made it possible for a lot of minorities to … in some cases even better themselves," Gonzales said.

As Trump held two rallies in Arizona on Oct. 28 his campaign released what it called the American Dream Plan for Hispanic Americans. Speaking in Glendale, Trump said his plan would bring more than 2 million new jobs to Hispanic communities and create over a half-million new Hispanic-owned small businesses.

"Over the last four years I've been delivering for Hispanic Americans like never before," Trump told the crowd.

Behind in national polls, the president is putting up a fight for Latino voters in key swing states with Democratic candidate Joe Biden. Polls show Biden with a commanding overall lead with Hispanic voters, a diverse voting bloc that defies neat political categories. Still, about three in 10 registered Latino voters nationwide back Trump, roughly consistent with how Latinos voted in 2018 congressional elections, according to AP VoteCast, and in 2016, according to a Pew Research Center analysis of voters. And of those, Latino men — like men of other groups — have supported Trump more than Hispanic women, and in some cases, in contrast to members of their own families.

A recent Pew survey showed 67% of Hispanic women and 59% of Hispanic men supporting Biden. Similarly, Hispanic women were 9 percentage points more likely to vote for Democrats than Hispanic men in 2018, according to AP VoteCast data. The nagging divide highlights the defining role that gender, maybe even more than race could have in the election. 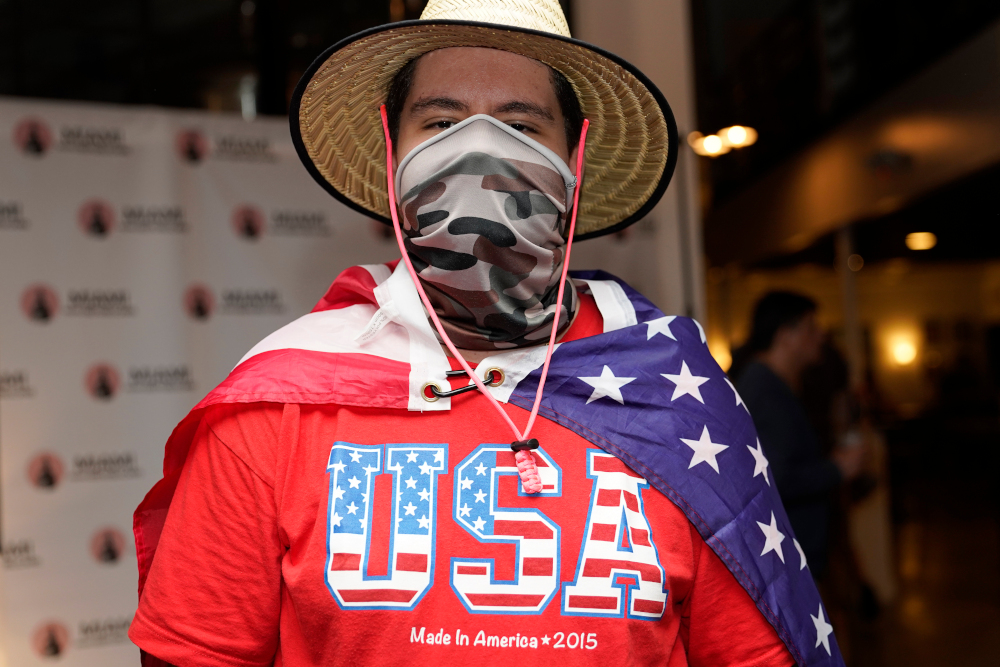 In this Sept. 29, 2020 file photo, Eddie Collantes stands with an American flag draped around his shoulders as he attends a debate watch party hosted by the Miami Young Republicans, Latinos for Trump, and other groups in Miami. (AP File/Lynne Sladky)

Gonzales said his wife, a Democrat who works as a therapist, plans to vote for Biden. In 2018, she convinced him to vote for Democratic Sen. Kyrsten Sinema, a victory that cemented Arizona's swing-state status to many in Washington.

But this time around, he's rarely discussed either presidential candidate with his wife or daughters, ages 25 and 29.

"We don't even talk about politics because it just leads to arguments," said Gonzales, a third-generation Mexican-American. "As long as I leave religion out of the house, and my views on religion and politics, we're fine," he said.

To explain the gender gap, Geraldo Cadava — a historian at Northwestern University and author of "The Hispanic Republican: The Shaping of an American Political Identity, from Nixon to Trump" — points to trends in the U.S. workforce. Latinos made up nearly 21% of male-dominated federal law enforcement agencies in 2016 such as Customs and Border Protection, which is almost 40% Latino, according to Justice Department data. Latino men are a growing share of local law enforcement agencies and the U.S. military, he said, which all lean Republican. And in recent years, more Hispanic women have graduated from college than men.

Cadava sees the ground maintained by the GOP with Latino voters under Trump as key to the party's future, whatever the outcome of the Nov. 3 election. But as Latinos near a fifth of the U.S. population, he said, clinching the "usual 25 to 33%" of the Hispanic vote will be a losing game. "That math, just at some point isn't going to work in your favor."

Throughout the campaign, some Republicans and Democrats have pointed to Trump's brash masculinity — central to his appeal to men of all groups — to explain his pull with Latino men, likening his style to so-called machismo culture. 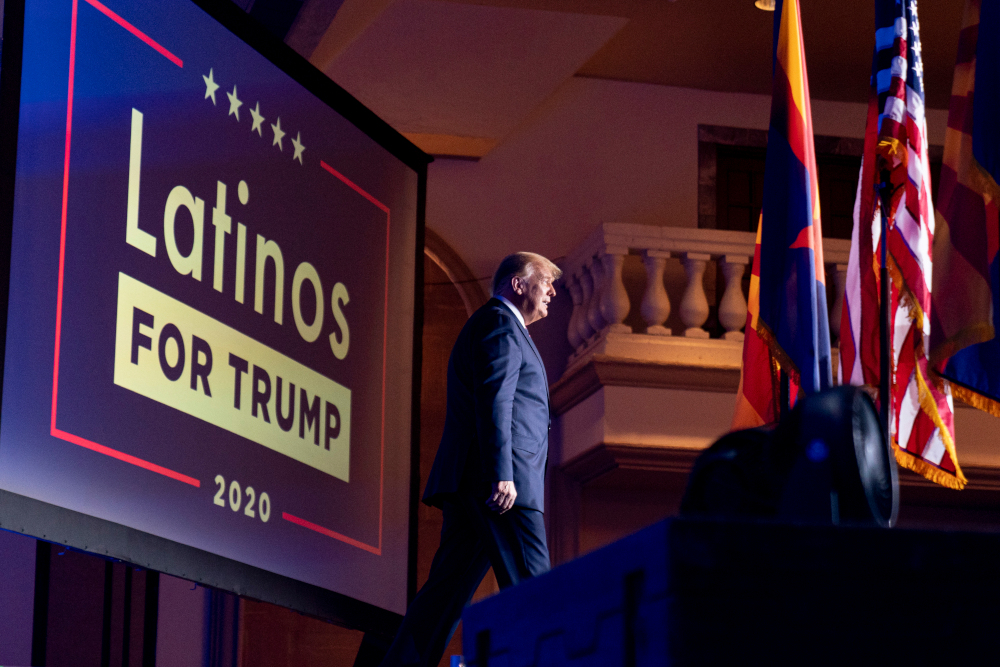 "Latinos like a strong leader. They don't like somebody who's apologizing, they don't like people who waffle," said Jesse Romero, an advisory board member of Catholics for Trump. "They're used to strong men, period."

But many U.S.-born Latinos, projected by Pew to be the largest non-white voting group in the election, have few cultural ties to Latin America or its leaders and balk at being described as a monolithic bloc — given the vastly different cultures and migration histories of 60.6 million people.

Targetting these Latino men in the election's home stretch, the Mi Familia Vota group last week launched a $1.4 million digital ad campaign in key states including Arizona, Nevada, Florida, Wisconsin, Pennsylvania and Michigan. The voting organization has worked to turn out the Latino vote against Trump.

In one 30-second Spanish-language ad, a soccer commentator narrates the losses Latino men have faced in healthcare and jobs under Trump's handling of the coronavirus pandemic.

"The message is clear. We're talking about how Trump has failed us," Eduardo Sainz, the organization's Arizona director said. In Arizona, where polls show Biden with a narrow lead, Mi Familia Vota has registered 185,000 new Hispanic voters, he said. Sainz estimates 60% have been women and 40% men.

The gender gap tends to benefit Democrats as Hispanic women have voted in some recent elections at higher rates than men. Sainz acknowledged that Trump's lasting appeal among some Latino men has worried Democrats and puzzled others, but his group has found that women often have the last word.

"Latina women have high influence in our households."