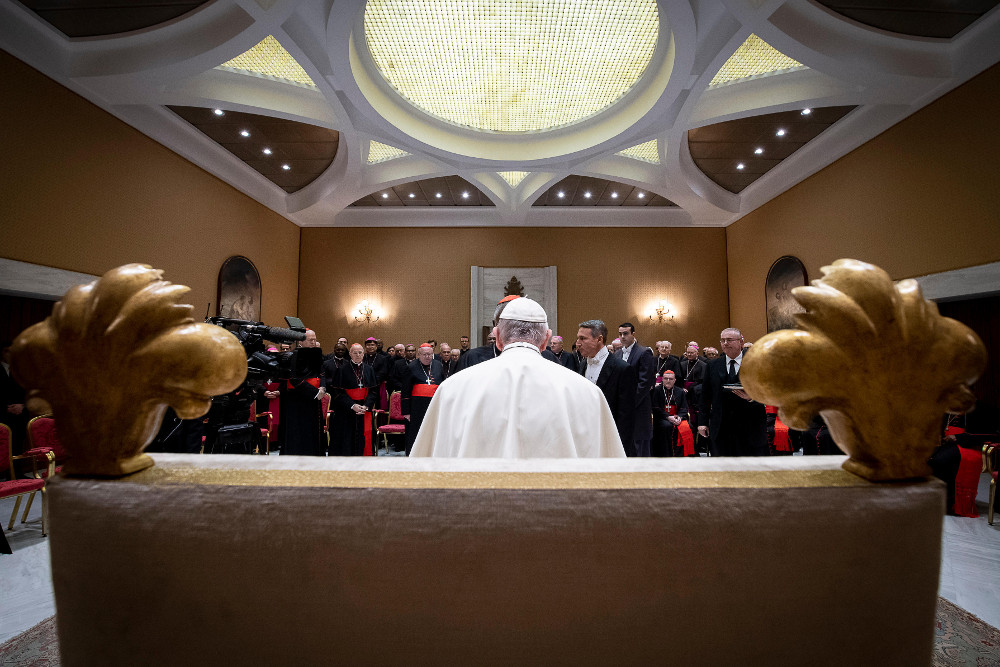 Pope Francis speaks to members of the Congregation for Divine Worship and the Sacraments during their plenary meeting at the Vatican Feb. 14. (CNS/Vatican Media)

Leaders of the national conferences of Catholic bishops will soon convene Feb. 21-24 in Rome to collectively confront the scourge of clerical sex abuse that failures in leadership have allowed to fester over several decades. Concrete action outcomes are urgently needed and impatiently awaited.

Any emergent policy, however, if it is not built on church leaders' recognition of how sacramental power (ordination) may contribute to the fermentation of abuse, is unlikely to be effective in eliminating clerical sexual activity and its cover-up. This task requires Pope Francis and his fellow bishops to actively choose to get to the truth and to outline it.

The great late French sociologist Pierre Bourdieu wrote in his book Practical Reason: On the Theory of Action about how word games, including euphemisms, are a crucial strategy in the Catholic Church's reproduction of inequality between the hierarchy and the laity. Euphemistic language is not simply jargon or the pragmatic shorthand of insiders. It is used rather to mystify and to distract from and, especially, to deny a given reality. Church officials use euphemistic language, Bourdieu argued, to inoculate themselves from acknowledgement of the real truth of church practices and to convince the laity (and others) that there is nothing arbitrary about hierarchical power and the clerical privilege it embeds.

I thought about Bourdieu in August 2018 as I read the findings from the Pennsylvania grand jury report on sex abuse in Pennsylvania Catholic dioceses. The report documented multiple instances of euphemization in action. And indeed it called out euphemization for what it is.

Summarizing the analysis of the diocesan sex abuse files conducted by the FBI, the grand jury wrote: "It's like a playbook for concealing the truth: First, make sure to use euphemisms rather than real words to describe the sexual assaults in diocese documents. Never say 'rape'; say 'inappropriate contact' or 'boundary issues.' … When a priest does have to be removed, don't say why. Tell his parishioners that he is on 'sick leave,' or suffering from 'nervous exhaustion.' Or say nothing at all."

Euphemisms, as the grand jury noted, conceal the truth. But what is the truth being concealed? Most obviously, a truth being concealed is that some Catholic priests (and some bishops and cardinals) are having sex with children (and with adults). This truth should not be glossed over. It reveals a blatant violation of a child's personhood and dignity; a violation that, notwithstanding its criminality and irrespective of any psychologically benign assessment communicated to church officials, would and should be seen as a violation of Natural Law, the thesis anchoring Catholic moral reasoning.

This truth also reveals behavior that is, of course, a violation of the vow of celibacy obliged by ordination to the priesthood. Euphemization thus serves to conceal the double truth or the "coexistence of opposites" that, Bourdieu maintains, is necessary to sustaining the church's power.

This is the truth that although, as the Second Vatican Council affirmed, the church comprises the whole People of God — the laity and the ordained — in practice, the church is structured by inequality that is sanctioned and consecrated by priestly ordination. The fact that clerics engage in sex and the fact that such clerics are protected by the church both materially and symbolically (through euphemistic language) illuminates the double truth of celibacy and sexual activity. It also conveys the truth that the priesthood, as the Vatican argues, is different — it "is of another order," bound up with "the mystery of Christ" (Congregation for the Doctrine of the Faith, "Women in the Ministerial Priesthood," in Origins) — but nonetheless concretized in particular ways by the church. Indeed, its concretization reveals the double truth in the church's claim that "priesthood is a service and not a position of privilege or human power over others."

Francis repeatedly denounces clericalism and expresses concern lest "sacramental power [become] too closely aligned with power in general" (Joy of the Gospel). And he emphasizes that the church "is not an elite of priests, of consecrated people, of bishops — but that everyone forms the Holy Faithful People of God." In reality, however, power in the church is inextricably bound to ordination, and which, by definition, consecrates a clerical culture as well as exclusionary practices toward the non-ordained. Language, no matter how deftly employed, cannot obscure this reality.

Unless church officials can come to recognize the standpoint of privilege and power that they occupy, and how it might be distorting their understanding of priesthood, of equality, of sex and sex abuse it is hard in the current moment to see a way out of the crisis they have created. Euphemization has enabled the hierarchy to mask the double truths — celibacy/sexual activity and priestly service/power — that have sustained its consecrated status for many generations of Catholics.

But the effectiveness of that strategy may be waning, as suggested by the laity's declining confidence in church leadership found in a Pew Research study. The February summit provides an opportunity to forge a different strategy.