When, in mid-August 2004, Wilton Gregory, then-bishop of Belleville, Illinois, showed up in Daejeon, South Korea, for the triennial meeting of the Federation of Asian Bishops' Conferences, his nameplate had been "corrected" to Gregory Wilton. They certainly didn't know of any St. Wiltons. The 100-plus bishops and theologians there from East, South and Central Asia knew little of this American but were surprised and delighted that he was, like almost all of them, a man "of color."

The meeting had a detailed agenda and would produce an extensive final statement plus a "Message to the People of God in Asia and People of Good Will." This gathering every three years brings together the cream of the Asian church, theologians, men and women religious and lay experts. 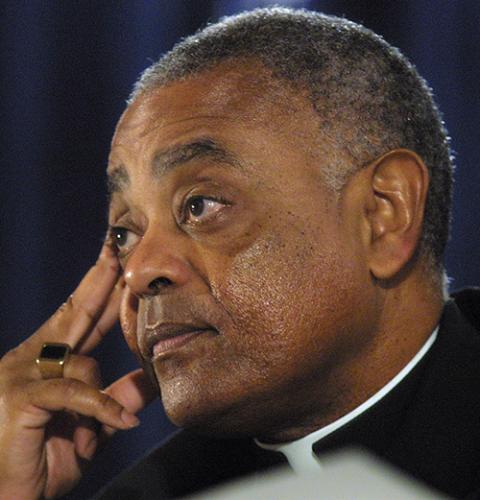 Then-Bishop Wilton Gregory, president of the U.S. Conference of Catholic Bishops at the time, is seen during the U.S. bishops' fall meeting in 2002. (CNS/Bob Roller)

And in this 2004 assembly, before they broke into assigned discussion groups, the organizers unanimously agreed to ask this non-Asian bishop to briefly address the group and hold an extensive Q&A. The topic they were especially eager to hear about, a topic they had only lately begun to concern themselves with, clerical sex abuse, turned out to be a noteworthy part of their entire gathering.

A Chicago priest, then auxiliary bishop there, then bishop of a middling diocese in the middle of Illinois, Gregory had been chosen by his brother bishops to be their vice president (1998-2001) under the presidency of the very popular Archbishop Joseph Fiorenza of Galveston-Houston, and to succeed him the following year.

Gregory took the helm of the U.S. Conference of Catholic Bishops in 2001, just as all hell was about to burst forth on the abuse crisis, and he spent virtually every day for the next three years dealing with little else. He told his general secretary, Msgr. Bill Fay, that he had hoped to get away on a foreign trip once a year, but as his term ended in 2004, he had gotten away not once.

About to be freed of bishops' conference duties, Gregory told Fay that he wanted at last to take one trip. Where? Fay asked. Asia, he said. Any particular countries? You figure it out.

And so, as a good bureaucrat, Fay did. He commissioned me, his political adviser on Asian affairs, to come up with a reasonable trip. I, in turn, immediately called up contacts I had with both Maryknoll and Catholic Relief Services, and both, especially Maryknoll, proved invaluable.

Together with the conference's travel agency, we plotted stops in Japan, South Korea, Hong Kong and Thailand. Having learned from longtime friend Bishop John Cummins* of Oakland, California, of the Federation of Asian Bishops' Conferences' meeting that year in Daejeon, we arranged for Gregory to be there Aug. 13-27, 2004.

The time spent at each of the other stops was rich in so many ways, most memorably Tokyo (with Maryknollers Frank Riha and Bill Grimm — considered by a CNS staffer as "the funniest guy in Asia"), Seoul (with famed health provider to sick peasants in North Korea Maryknoller Jerry Hammond), Hong Kong (the Holy Spirit Study Center with Maryknollers John Cioppa, Peter Barry and Betty Ann Mayheu) and Bangkok (with Catholic Relief Services' Mark Pierce).

At the Daejeon session, there were dozens of questions posed to Gregory, which he handled with aplomb, respect and frankness. And often with wit.

A questioner concerned about the sex abuse scandals asked, "What position do you take regarding priests involved with women?"

Perhaps caught a bit off key by the question, the bishop replied in not the most apt terms: "We're not in favor of that either, but today our great concern is for the harm caused to children."

To one questioner expressing concern with recent U.S.-Asia policy, Gregory acknowledged, "Our government has many faults but we also hold to the good it also does. ... I recall the words of my home parish pastor, a 92-year-old son of Irish parents, when he advised me: 'Wilton, do a little good and not too much harm.' "

I'm not aware of any harm that Cardinal Wilton Gregory has done, but I'm well aware of a great deal of truly pastoral good he's done, with a special week in Asia 16 years ago standing out for decades to come.

*The spelling of Bishop John Cummins' name has been corrected.

[Tom Quigley is the former longtime policy adviser on Asia for the U.S. Conference of Catholic Bishops.]