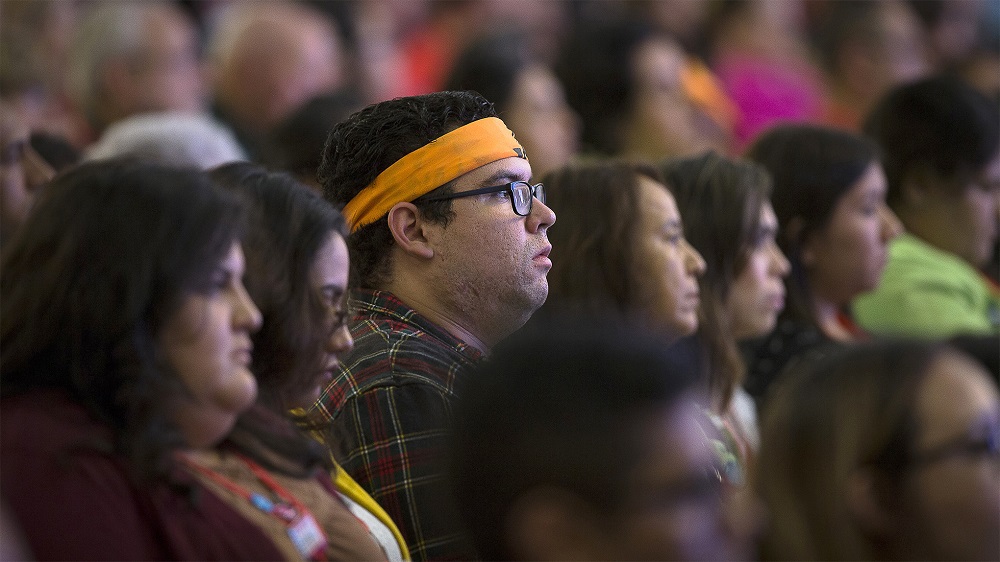 For Gerardo Vargas, the prospect of dining with a bishop seemed like a meeting with the “undercover boss.”

“He’s the person in charge, and there are so many steps before getting to the bishop. We can’t even get to the first one, let alone the tenth [step],” said the 22-year-old youth minister from Colton, Calif.

But on Sept. 21, Vargas and 700 other young adults got the opportunity to skip straight to the last step at the dinner that closed the second night of the National V Encuentro. The dinner brought together participants ages 18-35 with the approximately 130 bishops who attended.

During one conversation with the bishops, Pedro García from the Diocese of Knoxville said that he and other young adults told the bishop “we are hungry.”

“We don’t want to just party, have a good time, but we also want to learn. We’re hungry for more to keep growing in our faith, in our vocations.”

He personally shared with the table that in his home diocese, where he volunteers with young adults and at retreats for youth, support from the bishop allowed them to hire a full-time diocesan employee to work with young adults. Since the hire three or four years ago, active young adult groups have grown sixfold.

San Antonio Archbishop Gustavo García-Siller said “it was a beautiful experience to be with the young adults in dialogue.”

Speaking of those at his table, he said “all of them are working and active in the church, so the V Encuentro has been helping them to articulate, not for themselves only but for others, especially the bishops, how we need to work together in this making up of the Catholic church.”

“This is a very important moment for us bishops to listen and to act,” he said. “Listening is a beginning and opens doors, but as we go through those doors, the panorama changes, and is richer, and we need to act.”

From the Diocese of St. Augustine, Fla., Tatiana Saltarriaga said her table shared concerns about parishes not allowing young adults to participate in various ministries because they lack experience, thereby denying them the chance to ever gain experience.

To hold more diocesan positions was a recurring request from young adults at the V Encuentro. But for Vargas, the frustration lies in his inability to do his current job effectively.

“We don’t need other positions,” he and his tablemates told a bishop during dinner. “What we want is to be allowed to do the positions we’re assigned already,” though it becomes difficult when they are regularly “shut down immediately.”

“He just thought we wanted more involvement in the church,” Vargas said of the bishop’s surprised reaction. “And it’s not that we don’t, it’s just that -- I’m the youth minister. I want to be the youth minister, I want to bring these ideas, have the plan and set it in motion… I just need you to say yes.”

Sharing a table with other young adults who have experienced the same problems but on the opposite coast made Vargas feel validated in his grievances. “Now we know it’s not just us; it’s happening across the entire country.”

And while he’s enjoyed meeting people through the V Encuentro and hopes that the process is worth the investment, Vargas said he feels like a lot of their problems would’ve been solved simply by talking to their bishop the same way they did at this Sept. 21 dinner.

For 34-year-old Ana Sierra from the Diocese of Baton Rouge, this dinner served as a reminder that “bishops are human.”

“We just have to make an appointment and not be scared like, ‘oh my gosh, he’s the bishop, we can’t talk to him!’ We want to be heard, but we need to move, too, in order to be heard.”

Francisco Santos Ponce, a college student and youth minister from the Diocese of San Bernardino, said he appreciated that the bishop at his table, Michael Warfel of the Diocese of Great Falls-Billings, Mont., didn’t dominate the conversation and wanted to hear young people’s thoughts.

“At times we still do feel lost,” Santos said. “We want to do so much, but we don’t know where to go. And that’s what this V Encuentro is about.”

The need to take care of youth is especially urgent because of the current nationwide sex abuse scandal, he said.

“This is a huge cause for a lot of people to just leave the church, the ones that, as Bishop [Oscar] Cantú was talking about, didn’t have strong roots,” he said, referring to an address that morning in which the bishop used the metaphor of tumbleweeds to describe what happens when people aren’t rooted in their faith.

Santos’ response to the “serious question” of why one would stay in a church that covers up abuse is “having the faith and the strong roots to understand that our church isn’t just our pastors,” he said. “We don’t follow our pastors. We don’t follow our bishops. We follow Jesus Christ. They’re supposed to lead us, but they’re human and they fail.”

How to cope with the reawakened sex abuse crisis in the church came up at Rocio Castañeda’s table, dining with Bishop John Folda of Fargo, N.D.

Castañeda, who is from the Diocese of Seattle, said that one young woman addressed it by telling the bishop that being a “Catholic face” at her college has been especially hard lately. Folda responded saying that he, too, is frustrated; that time spent dealing with the crisis is time that could otherwise be spent in evangelization or other needs.

“It was very emotional at the table,” Castañeda said, adding that she appreciated how honest Folda was. “He didn’t just say, oh, just pray about it -- because that’s one of the things you hear most, that we’re going to be fine, just pray about it.”

“Instead, he acknowledged that this affects everybody,” she said.

Brenda Noriega, who’s on the board of Pastoral Juvenil Committee, said that young people need to learn how to focus anger from the sex abuse crisis and channel it into a “healthy way to continue serving the church.”

“The question for young people is how do we support our bishops,” said Noriega, who is also a young adults ministry coordinator. “We’re not reforming the church; what we’re doing is moving forward from where we are. We cannot hide it, but we cannot run away.”

With a wide age range at the V Encuentro also came a wide range of “experiences of what the church is, as well as the questions asked,” said 24-year-old Cristina Torres from the Diocese of Oakland.

“I feel like the older generation is talking more about their parishes, whereas the people [ages] 18 to 35 are talking on a bigger scale. We’re better able to collaborate on a regional scale than on a parish level because we understand that’s how change happens.”

Sparking change is “easier when you know there’s a space available to you,” she said.

Sharing a table with Bishop Michael Sis from the Diocese of St. Angelo, Texas, 31-year-old Yesenia Andablo told him that it often feels like young adults are not invited to take part in leadership.

“We just need a little bit of attention, because we’re ready to work,” said Andablo, who’s from the Archdiocese of Galveston-Houston. “We have the passion, we’re so dynamic, that we can give so much to the church. We don’t need much; we just want to see that we’re doing things right, that we’re heading in the right direction.”

For the bishops to initiate the encounter with young adults impressed Andablo, who said that “that says a lot about how they really see that the future is us.” She found Sis to be open-minded and eager to take in as much knowledge as he could to bring back with him to his diocese.

Andablo and her peers at the table conceded that “as young Catholics we have to be mature in our faith and have to be responsible.

“The stereotype that they often have of us as young adults is that we’re irresponsible, that we don’t take things seriously, we’re late, we don’t show up… We need to change that perspective so that people trust us with leadership.”

García-Siller noted that the group of young people he dined with already disrupted the stereotypes he might have had. 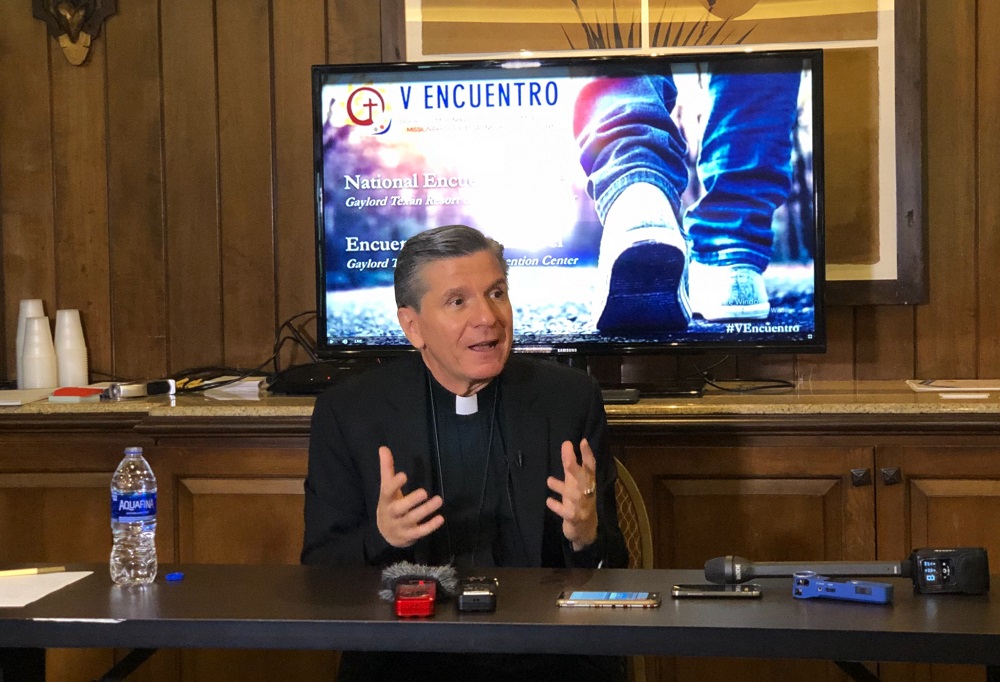 “I got the sense that they want to do something for the next generation, and for me that was very exciting, because we think that the youth are self-centered or they live in their own little world,” he said. “They were very connected and very dedicated, so I was inspired.”

Asked if the ideas the young people shared would actually be allowed to go forward, García-Siller also pushed back at the notion that young people need permission to act.

“Some are ideas,” he said, referring to young adults’ contributions to the discussion, “but the majority aren’t ideas, they’re dreams that have already started to move forward.”

Rather than thinking about what to tell young people or what to do for them, the bishop said, the question is “how we’re going to work together more.”

[Soli Salgado is a staff writer for Global Sisters Report. Maria Benevento is an NCR Bertelsen intern. Follow them on Twitter @soli_salgado and @mariafbenevento.]

This story appears in the La Iglesia Hispana feature series. View the full series.
A version of this story appeared in the Oct 5-18, 2018 print issue under the headline: Hispanic young adults engage bishops, express needs at V Encuentro.