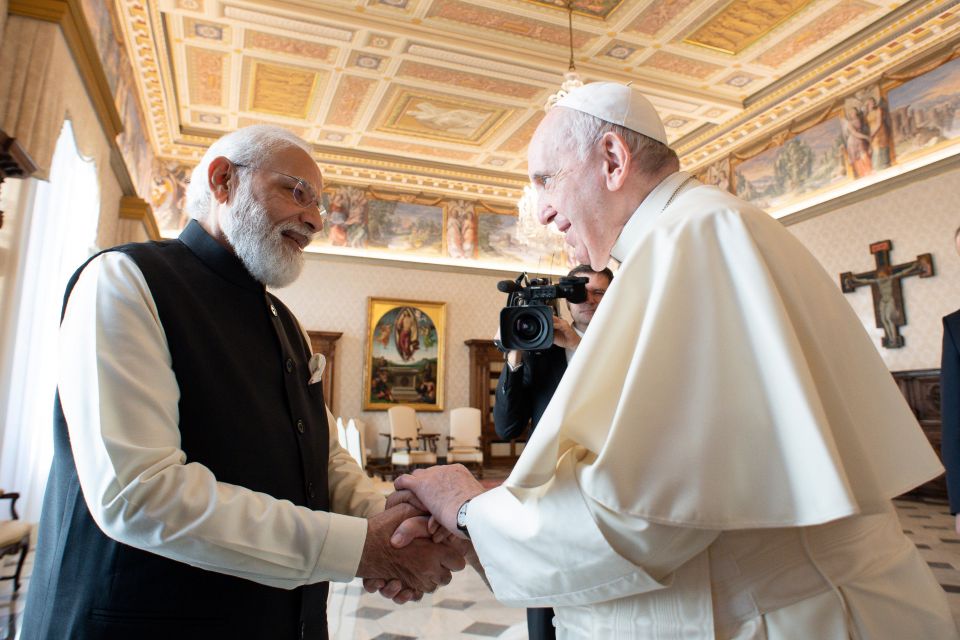 Vatican City — A recent meeting between Pope Francis and Indian Prime Minister Narendra Modi has raised hopes among Indian Catholics about the possibility of a future papal visit, one that might help foster religious freedom and gender equality in one of the world's largest nations.

The Oct. 30 meeting between the pope and the Indian prime minister was met with a feeling of “gratitude” by Catholics living in India, said Joseph Ivel Mendanha, provincial superior of the Redemptorist Province of Majella in India, in an interview with Religion News Service.

Mendanha called the meeting “a special moment for us Catholics in India because it gives us a great sense of joy and almost tears in our eyes." He added that he hoped Modi "will be touched by the sincere warmth that Pope Francis always exudes with whoever he meets, especially heads of state and heads of government.”

The meeting between Modi and Pope Francis was somewhat overshadowed by the meeting that the pontiff held the day before with U.S. President Joe Biden at the Vatican.

Pope Francis was initially scheduled to attend the climate summit, but the Vatican announced he would instead send a delegation led by his right-hand man, Cardinal Pietro Parolin, who heads the powerful Secretariat of State at the Vatican.

In a tweet showing smiling pictures of the Vatican audience, Modi wrote that he “had a very warm meeting with Pope Francis” where they discussed “a wide range of issues,” and that he invited the Roman pontiff to visit India.

The pope’s visit to India is expected “at an early date,” according to the Indian Foreign Ministry.

Vatican officials told Religion News Service that the meeting has not yet been confirmed, but Pope Francis has often expressed his hope to visit the majority Hindu country. In 2017 bishops in India extended an invitation to the pope, but the local authorities said that the papal visit had to be canceled due to scheduling issues.

The last time an Indian prime minister met with a pope at the Vatican was in June 2000, when then-Prime Minister Atal Bihari Vajpayee greeted Pope John Paul II. The papal audience with Modi lasted roughly 50 minutes, but little information was offered about what topics the two actually addressed.

“During a brief conversation, the cordial relations between the Holy See and India were discussed,” the Vatican press office said in a short statement released shortly after the meeting. Modi gifted Pope Francis with a silver candlestick and a book entitled “The Climate Climb” showcasing India’s commitment to combating climate change.

Pope Francis gifted in return a collection of his works, including a document that he co-signed with the Grand Imam of Al-Azhar in February 2019, which calls for tolerance and peace among different religions. He also gave Modi a plaque in bronze with the quote from Isaiah: “The desert will become a garden.”

Modi was in Rome to attend the G20 summit of leaders from the world’s strongest superpowers and later traveled to Glasgow, Scotland, to take part in the COP 26 conference on climate change organized by the United Nations Oct. 31 to Nov. 12.

Christians represent only 2.3% of India's 1.3 billion people, with Catholics comprising about 1.5% of the population.

Francis would become the third pope to visit India, following in the footsteps of Pope Paul VI, who visited Mumbai in 1964 for an International Eucharistic Congress, and Pope John Paul II, who visited the country in 1986 and in 1999. Mendanha called Paul VI’s visit “a watershed moment” for Catholics in India that “encouraged people” and “brought the simple, the poor, the maimed, the crippled out on the streets.”

India has experienced a spike in violence against Christians in the country in 2021, according to data released Oct. 21 by the Association for the protection of Civil Rights. The United States Commission on International Religious Freedom has ranked India as a country with top-tier levels of persecution against religious minorities.

In the Karnataka region in southern India, legislators are considering an Anti-Conversion Bill to prevent evangelization by Christians and other minorities in the area. A group of Christians in the central-eastern region of Chhattisgarh were attacked on Nov. 1 by a mob of right-wing extremists who insisted they convert to Hinduism.

Modi is a member of the Bharatiya Janata Party (BJP) in India, a right-wing political party with nationalistic positions that has held power in the country since 2014.

Mendanha believes that a visit by Pope Francis would “without a doubt” help to mend the tenuous relations between Christians and Hindus in India.

If there were ever a time for Francis to visit India, he said, it is now.

“The way Pope Francis is, his connection to the poor and troubled and the weak, his connection to mother earth and his desire to bring people together to build bridges and tear down walls, that’s exactly what we as Catholics are looking for,” he said.

Catholic charities and organizations offered support and relief during the COVID-19 pandemic that wreaked havoc in the country, resulting in 460,000 deaths, according to official government data.

“This has not gone unnoticed or unrecognized by our government and all sections of our society irrespective of religion,” Mendanha said.

Joshan Leslie Rodrigues, managing editor of The Examiner, a Catholic newsweekly published in the Archdiocese of Bombay, said a visit by the pope would also help to encourage young generations of Catholics who have never seen a pope in their lifetimes.

“Much of the anti-Christian violence happens on false pretexts such as conversion and rising numbers of Christians, while the truth is the exact opposite,” Rodrigues told RNS, pointing to official government census figures showing the percentage of Christians decreasing.

Pope Francis’ “visit will shine a spotlight on anti-Christian atrocities, on the good work done by the Church in India and will help young Indians appreciate the value of the Christian faith in this land of multiple religious traditions,” Rodrigues said.

Anti-Christian persecution is not the only issue facing the Catholic Church in India. In 2019, Bishop Franco Mulakkal of the Jullundur diocese in India was accused of repeatedly raping a nun over a two-year period, sparking a conversation in the country about gender equality in the church.

The pope’s meeting with Modi represents “another Vatican glass ceiling broken,” according to Indian journalist Nirmala Carvalho, adding that she hopes that as a result, “the Church in India takes concrete steps to improve the gender balance.”

Indian Catholics eagerly await a papal visit to their community with a sense of “longing,” Mendanha said.

“His visit will be a visit of healing, of peace, of showcasing what Catholicism is all about: bringing people together.”