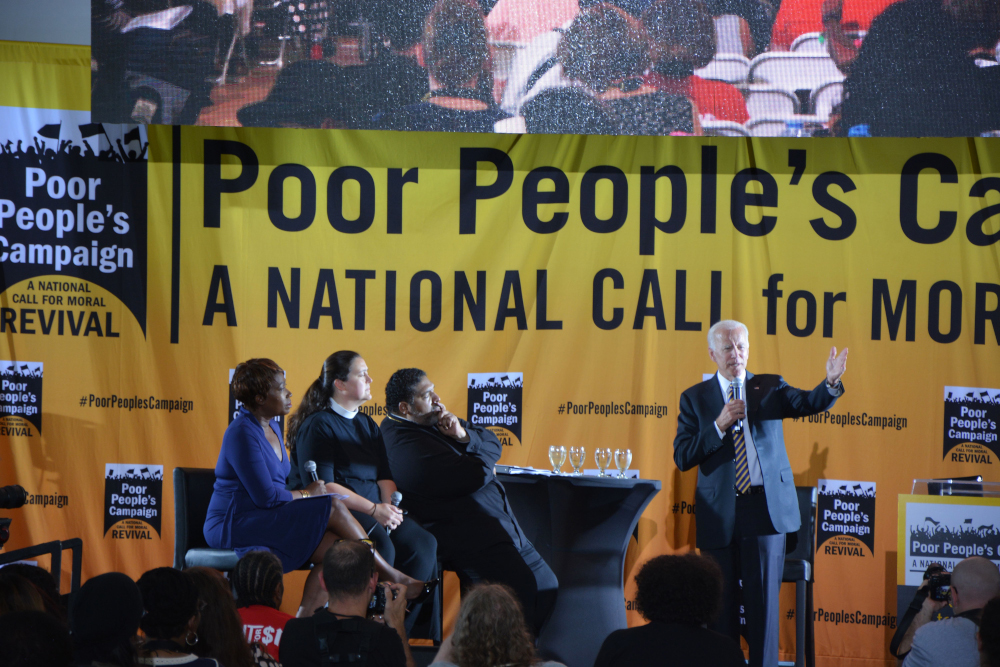 "We have the greatest income inequity … in the United States of America since 1902," Biden told the crowd of hundreds assembled on June 17 at Trinity Washington University in Washington, D.C. "But the fact of the matter is there is plenty, plenty to go around."

Biden, the current frontrunner among Democrats, according to most polls, was also asked questions by the co-chairs of the Poor People’s Campaign — the Rev. William Barber and the Rev. Liz Theoharis — as well as MSNBC host Joy Reid.

Attendees at the gathering of religious progressives peppered the onetime Delaware senator with questions about how he would address issues impacting the poor, including whether he would campaign in the South — a region that faces some of the largest issues of poverty.

"I plan on winning Georgia, South Carolina, North Carolina," he said. "And I believe we can win Texas and Florida."

Biden also discussed the issue of health care, saying as president he would make sure "that every single person in the United States has access to Medicaid right off the bat." He later argued that "you have no dignity when you cannot provide healthcare for your children."

During the question-and-answer session, one woman, Francine Jefferson, stood up and said she hailed from a county in Mississippi that is one of the poorest in the country. She asked Biden how he would address the impacts of climate change and natural disasters.

He responded by describing global warming as a "gigantic unfairness to people in poverty."

Biden was also asked by Barber if he would advocate for a formal debate on poverty, to which Biden said yes.

When Religion News Service asked Jefferson how she felt about Biden’s answer to her question about natural disasters and climate change, she said he "didn’t really answer it."

Instead, she pointed to other candidates who spoke at the Poor People’s Moral Action Congress, which lasts from June 17-19 in Washington, D.C.

Among them: Sen. Elizabeth Warren, who made a direct connection between climate change and poverty.

"Environmental issues are poor people’s issues," Warren told the crowd, explaining that as president she’d put a moratorium on things such as offshore drilling.

When asked about militarism by Theoharis, Warren replied: "We have to cut our military budget."

She added, "No great nation fights endless wars. … We have to spend here at home on our people, on our future."

Sen. Bernie Sanders, another leader in the Democratic field, also addressed the crowd, repeating parts of the message he has honed on the campaign trail.

"In my view, there will never be any real change in this country unless there is a political revolution," he said in his opening remarks. "The way we bring about change is when all of us stand together and fight."

Asked by Rev. Nancy Petty, a pastor in North Carolina, what he would do to address gerrymandering, Sanders called Republican governors "political cowards."

"They refuse to participate in a free, fair, and open elections because they know that if poor people and people of color and young people are allowed to vote and vote in large numbers, then they will lose," he said.

He then advocated for automatically registering any person who is 18 years old to vote, and later argued that "economic rights are human rights."

Sanders was followed by Sen. Kamala Harris of California, who led with a discussion of the biblical parable of the Good Samaritan, which she said helped clarify who one’s "neighbor" is.

"Neighbor is not about having the same zip code," she said. "What we learn about in that parable is that neighbor is someone you are walking by on the street …Neighbor is about understanding and living in service of others — that we are all each other’s brothers and sisters."

When asked by a formerly homeless young person about housing, Harris outlined plan for a Rent Relief Act, which would establish refundable tax credits in cases where rent and utilities exceed 30 percent of a given household’s income.

Harris also criticized the Trump administration for its practice of detaining children along the U.S.-Mexico border,

"We have babies in cages because of the polices of this administration — talk about morality," she said with visible frustration. "It’s a human rights abuse committed by the U.S. government."

Other lesser-known candidates who addressed the forum included businessman Andrew Yang, who fielded a question from two Native American crowd members by saying that the treatment of indigenous people has been "immoral and criminal."

Spiritual author Marianne Williamson impressed some in the crowd, noting her policy on reparations and arguing that the "forces of immorality are on the march."

Sen. Michal Bennet of Colorado was asked how he would overcome potential challenges to poverty-focused legislation from Senate Majority Leader Mitch McConnell leader if elected president. He said Democrats should out-maneuver McConnell. 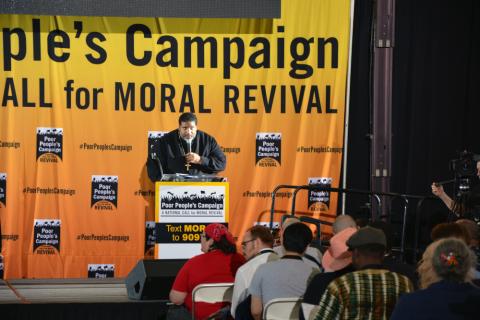 Rep. Eric Swalwell of California opened his talk by crediting Barber with helping Democrats take back control of the House of Representatives in the 2018 election. He also said that neither party had a monopoly on faith.

"Faith movements help us move our feet about the issues that matter," Swalwell told Religion News Service after his talk. "I’m a person of faith, and I remember the story of the weary traveler from Jerusalem to Jericho, and who helped him and who didn’t. That’s just who we are as Americans, is (people) who want to help each other out."

Barber, for his part, insisted throughout the forum that the Poor People’s Campaign is non-partisan, noting that if Barack Obama was still president or if Hillary had won "this campaign would have still launched."

Mayor Wayne Messam of Florida also appeared at the forum. He addressed the issue of immigration, saying that as president he would "do everything in my power … to make the plight of undocumented immigrants" a focus.

Former U.S. Secretary of Housing and Urban Development Julián Castro was originally slated to speak at the forum. But he had to cancel at the last minute due to flight complications, according to Poor People’s Campaign officials.

Organizers said President Donald Trump and other Democrats were also asked to attend the forum, but were not there on Wednesday.

Barber revved up the crowd with hymns and chants before Biden spoke. Poor People’s Campaign co-chair the Rev. Liz Theoharis name-checked participants who flew in for the event from Alaska, California, New Mexico, Pennsylvania, Alabama, New York, Colorado and others.

She noted that many people had to "save" to attend the event, which is also co-organized with Repairers of the Breach and the Kairos Center for Religions, Rights, and Social Justice — groups led by Barber and Theoharis, respectively.

Theoharis laid out the "fusion" of overarching, intersecting issues that brought participants together — ranging from poverty to environmentalism.

"We are a movement that is building power among the 140 million and (low-income) people," she said. "We are confronting systemic racism, poverty, ecological devastation, militarism and the war economy, and this distorted moral narrative of Christian nationalism."

Barber also took questions from Reid. The MSNBC host asked Barber what he would say to those who argue that churches should tackle the problem of poverty instead of the government.

Several White House hopefuls have gravitated to Barber and his events over the past two years, often to do more listening than speaking.

When the pastor and a bevy of other faith leaders held a protest last week outside the White House decrying the Trump administration, Pete Buttigieg — presidential candidate and mayor of South Bend, Indiana — showed up to pay "silent witness" to the proceedings.