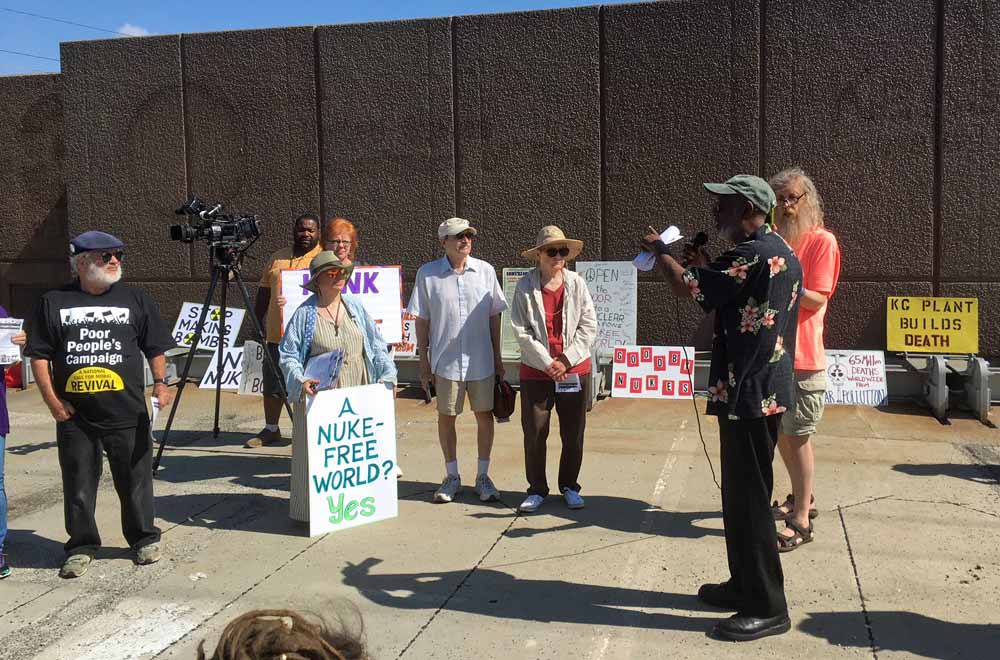 Protesters gather outside of the National Security Campus in Kansas City, Missouri, on Memorial Day, May 28, to oppose nuclear weapons. (Courtesy of Brian Terrell)

The protesters began the action at the boarded up entry to the Bannister Federal Complex, a site for the production of non-nuclear parts of nuclear weapons from 1949 to 2014, before marching to a new plant that makes nuclear weapons parts, the National Security Campus, about a mile away, where they held a rally and "die-in."

PeaceWorks Kansas City board of directors chair Henry Stoever, former National Catholic Reporter publisher Tom Fox, Community of Christ minister Lu Mountenay, Jordan "Sunny" Hamrick of Jerusalem Farm in Kansas City, and Brian Terrell, a Catholic Worker and national leader of Voices for Creative Nonviolence, all crossed the trespass line onto the plant and were arrested. They were released half an hour later.

"We like to call attention to the fact that we have a plant that makes parts for nuclear weapons in Kansas City, Missouri, and many people in the city don't know about it," said Jane Stoever, who attended the protest. "We hope to raise a hue and cry by the population against this."

Stoever also explained that three or four of the protesters plan to plead not guilty in order to increase publicity about the issue. They are charged with trespassing and their court date is set for July 19 but may be postponed.

Drawing attention to nuclear weapons production is important "because the federal government is spending an obscene amount of money on it. That's our tax dollars in use," Stoever said, explaining that the Trump administration has proposed increasing the National Security Campus budget by about $50 million, to nearly $800 million total.

"It's part of the administration's determination to make a whole new generation of nuclear weapons when we now have 122 countries through the United Nations who have signed the document calling for the abolition of nuclear weapons," she said. "This is a crucial time … and that's part of the drive that has brought my husband now for the third time to cross the protest line." 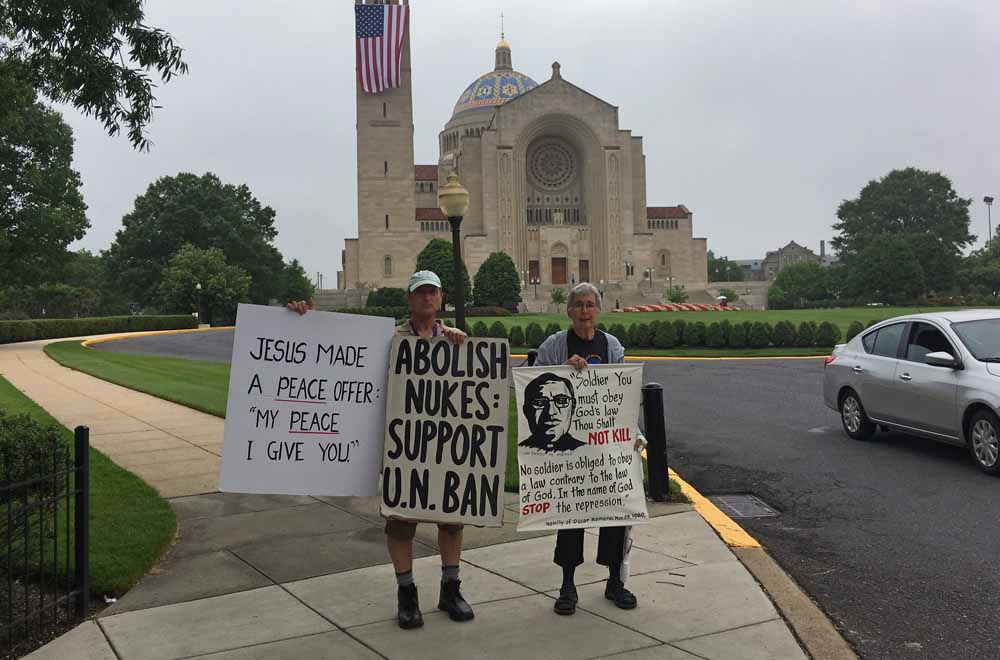 Michael Walli, a Vietnam veteran, and Kathy Boylan, both of the Dorothy Day Catholic Worker in Washington, D.C., hold a vigil outside of the National Shrine of the Immaculate Conception on Memorial Day, May 28. (Paki Wieland)

Meanwhile, in Washington, D.C., several activists from the Dorothy Day Catholic Worker house held a vigil outside of the National Shrine of the Immaculate Conception for about an hour during the Memorial Day Mass.

The protesters held signs reading "Jesus Made a Peace Offer: 'My Peace I Give You,' " and "Abolish Nukes: Support U.N. Ban," as well as one with an Oscar Romero quote calling on soldiers not to obey orders contrary to God's law. Police allowed them to remain because they were on a public sidewalk.

CHICAGO — On his 69th birthday, the pastor of Saint Sabina Catholic Church in Chicago spent hours standing in the middle of a busy intersection and holding a sign that read "AMERICA PUT DOWN YOUR GUNS ... STOP THE NRA SAVE OUR CHILDREN!"

According to a May 22 report by the South Side Patch, the priest, Fr. Michael Pfleger, said he was inspired by Martin Luther King, Jr., who "always spent his Birthday doing something for others." Pfleger stood in the intersection of 79th and Racine for two hours.

Meanwhile, according to a May 22 report from Uprise RI, Bishop Thomas Tobin of Providence, Rhode Island, publicly supported the Rhode Island Coalition Against Gun Violence's campaign to pass the Safe Schools Act and Assault Weapons Ban.

BRUNSWICK, GEORGIA — Three members of the group of seven that broke into the Kings Bay Nuclear Submarine Base in St. Mary's, Georgia, April 4, with hammers and baby bottles of their own blood were released from Glynn County Jail in Brunswick, Georgia, May 24, to begin home confinement.

According to a May 25 email update, Martha Hennessey, Carmen Trotta and Patrick O'Neill agreed to post bond ($50,000 with $5,000 cash paid, $1,000 for Trotta), wear ankle monitors, be confined in their homes, and turn in their passports. Liz McAlister, Clare Grady, and Mark Colville chose to remain in jail, while the seventh member of the group, Jesuit Fr. Steve Kelly, was not offered bond due to an upcoming case in Washington State.

All seven plan to continue peace activism. They are charged with conspiracy, destruction of property on a naval station, depredation of government property, and trespass.