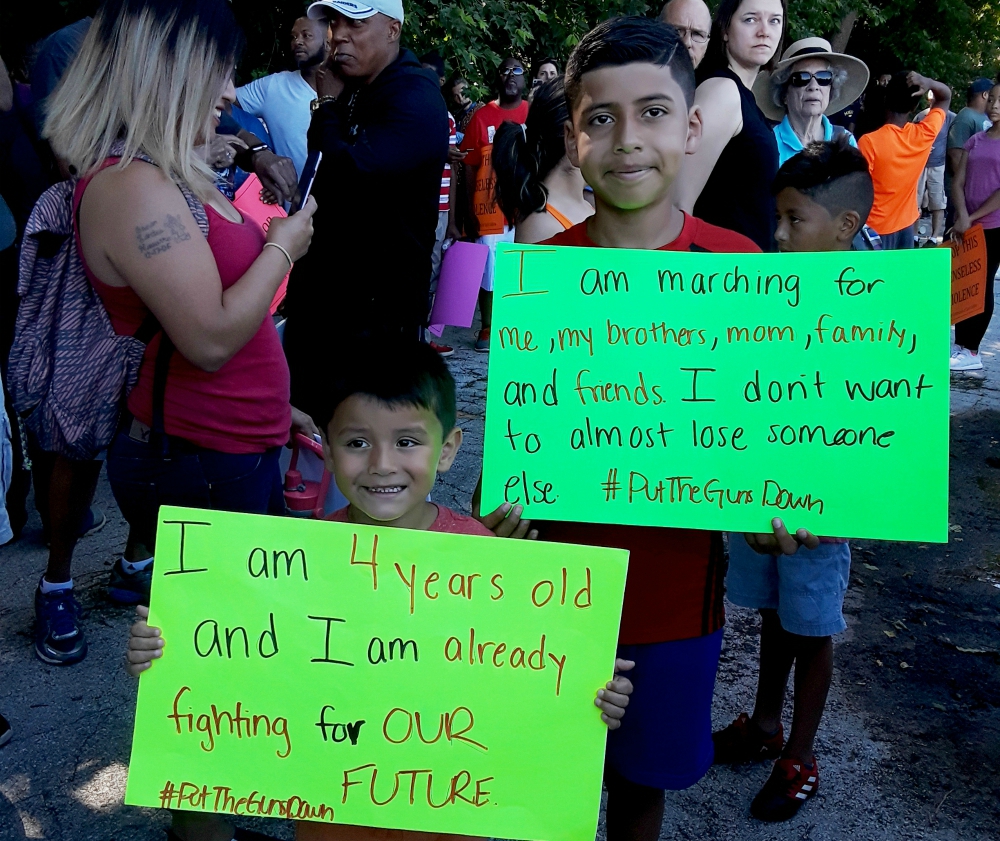 Two boys show their signs for a July 7 march against gun violence in Chicago. (Laurette Hasbrook)

CHICAGO — Thousands of protesters led by Fr. Michael Pfleger of St. Sabina Catholic Parish in Chicago, the Rev. Jesse Jackson and the ChicagoStrong student group shut down part of a major highway in Chicago July 7 to protest gun violence in the city. The shutdown was supported by Chicago's archbishop and its mayor.

Pfleger had refused to change the plan to block the Dan Ryan Expressway despite objections from police in the weeks leading up to the action; police argued that shutting down the highway could endanger people and would divert law enforcement from protecting neighborhoods to policing the protest.

State police officials had threatened arrests, and police tried to bar protesters from part of the highway, leaving two northbound lanes open to traffic. After a standoff, police ultimately allowed the protesters to block all northbound lanes for about an hour. 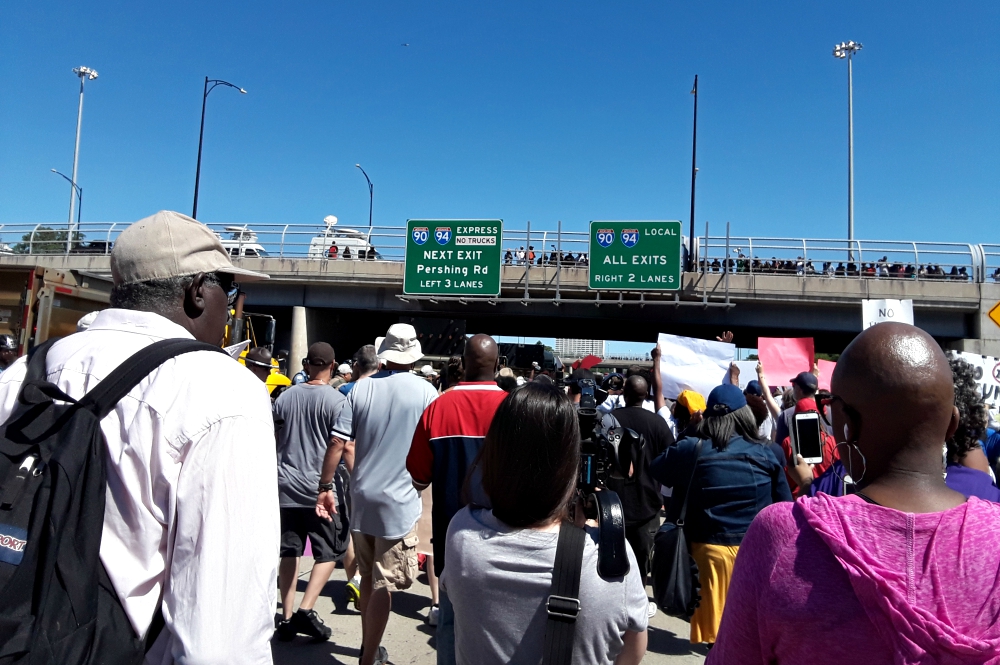 Thousands of people led by Fr. Michael Pfleger of St. Sabina Catholic Parish in Chicago, the Rev. Jesse Jackson and the ChicagoStrong student group shut down part of a major highway in Chicago July 7 to protest gun violence in the city. (Laurette Hasbrook)

A statement on the ChicagoStrong website said the highway shutdown was intended "to make sure they know we're serious."

Chicago Cardinal Blase Cupich put out a statement July 6 praising the protesters and inviting all citizens of Illinois to join in prayer "for the success of their cause and for the safety of all," including marchers, motorists and those trying to keep them safe.

"I applaud the courage shown by young people in our city and across the country demanding their right to life and human dignity, given by God and guaranteed by our nation’s founders. They make us proud. They give us hope. I encourage them to be bold and undaunted in pressing their case and securing real change to have the peace and security they have every right to expect," Cupich wrote.

DES MOINES, Iowa — The Des Moines Catholic Worker and Des Moines Veterans for Peace announced in a July 7 email their second annual vigil at St. Ambrose Cathedral, to be held on the anniversaries of the United States' use of nuclear weapons on Hiroshima and Nagasaki, Japan.

The Aug. 6-9 vigil will commemorate the anniversary of the bombing of the two Japanese cities while calling for an end to drone warfare today. The vigil will end with a march from St. Ambrose to the Iowa National Guard Drone Command Center for a rally and action coinciding with the time the U.S. dropped a bomb on Nagasaki Aug.  9, 1945.

The vigil organizers are asking more Iowa pastors, priests and religious to join them in their actions opposing the command center.

Pax Christi Metro New York is also planning to commemorate the anniversary of the bombing. On Aug. 5, it will hold a vigil for nuclear abolition, followed by an interfaith memorial including music, prayer and speakers, among them Maryknoll Sr. Jean Fallon, an anti-nuclear activist who spent decades in Japan.

WASHINGTON — The Franciscan Action Network joined with other Catholic leaders from various religious orders and peace and justice organizations to send thank-you letters to U.S. bishops who have publicly opposed family separation at the border, according to a July 5 press release.

In addition to expressing gratitude, the letters also offered the bishops continued support and encouraged further action from those bishops, such as calling on diocesan clergy to follow their examples and helping reunite children with parents.

Among the groups that signed the letters were: