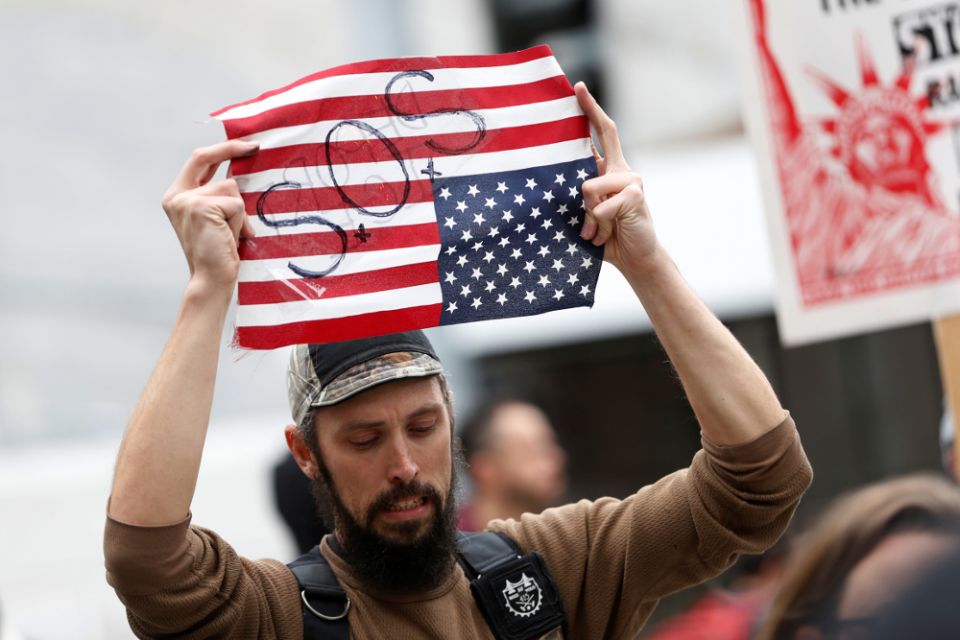 A demonstrator holds an inverted U.S. flag at a rally in late February outside the U.S. Immigration and Customs Enforcement office in San Francisco. The rally denounced raids by ICE to apprehend immigrants in the country without legal status. (CNS/Stephen Lam, Reuters)

Editor's Note: This story was updated at 8 a.m. June 8 Central time with comments from Bishop Daniel Thomas, of the Diocese of Toledo. A previous updated included comments from a press conference hosted by the Toledo Immigrant Alliance and Rapid Response Network.

Washington — The bishop of Cleveland said a recent immigration raid at an Ohio gardening and landscape company "makes clear that our current immigration system contributes to the human suffering of migrants and the separation of families."

In a June 6 statement from the Diocese of Cleveland, Bishop Nelson Perez said he felt "a great sadness" for the families affected by the raid and whose lives have been disrupted.

According to news reports, about 200 agents from U.S. Immigration and Customs Enforcement, known as ICE, surrounded two locations of Corso's Flower and Garden Center and arrested more than 100 workers in north-central Ohio June 5.  A Washington Post story June 6 said that "families of the arrested workers gathered at St. Paul Catholic Church in Norwalk, Ohio, seeking answers as to the whereabouts of their loved ones."

On Facebook, the immigrant advocacy group Hola Ohio posted photos June 6 of some of the children who had a parent or both parents taken in the raid and who had gathered at St. Paul. In the Facebook post, Veronica Dahlberg, the organization's executive director, said families were "distraught, crying, frightened, missing loved ones and at a loss for what to do." Via Twitter, she said some children remained in day care after the raid.

In the statement from the Cleveland Diocese, Perez said he offered "prayers, and ask the prayers of all people of goodwill, that the families affected will not be separated in the days and weeks to follow."

He said the bishops of the Catholic Church have a duty to point out the moral consequences of a broken system.

"The church is advocating for comprehensive and compassionate reform of our immigration system so that persons are able to obtain legal status in our country and enter the United States legally to work and support their families," he said. "Since this is a responsibility of our Congress, I would encourage you to speak with your legislators advocating for reform of our present system."

Bishop Daniel Thomas, of the Diocese of Toledo, where Sandusky is located, responded in a June 7 statement that through parishes and Catholic Charities, the diocese is "offering pastoral care and working directly with the families affected by this extreme action."

"The Catholic Church supports the human rights of all people and offers them pastoral care, education, and social services, no matter what the circumstances of entry into this country, and it works for the respect of the human dignity of all, especially those who find themselves in desperate circumstances," he said.

"We recognize our current immigration policies are broken and are actively contributing to the suffering and separation of vulnerable families. … No matter our political persuasion, when families are broken apart, as in this raid, we should all recognize that the common good is not served," he said.

On June 7, the Toledo Immigrant Alliance and Rapid Response Network — a coalition of activists, community leaders, and local organizations — gathered for a news conference to speak about the immigration raid in its environs, and its effects on the community.

One of the speakers was a retired Catholic priest, Fr. Tony Gallagher, who asked those who belonged to faith communities to act, and implored others to put themselves in the shoes of migrants and to "understand their humanity."

"As believers, will we walk the talk of faith-filled people?" Gallagher asked. "And consequently actively address the virulent injustice and clear absence of respect and compassion toward our sisters and brothers who doggedly come to our border (fleeing) tyranny and destitute living conditions, seeking only a humane life for themselves and their children?"

The division of families cannot be tolerated by any person of faith, he said, adding that going to the temple, to church, to a mosque or any other place or worship, or waving an American flag, or singing hymns doesn't do any good, if a person does not address the needs of immigrants in a just and compassionate manner.

"Those efforts are only a charade, unless we act," he said. "If we do not act, we are religious phonies and ungrateful citizens."