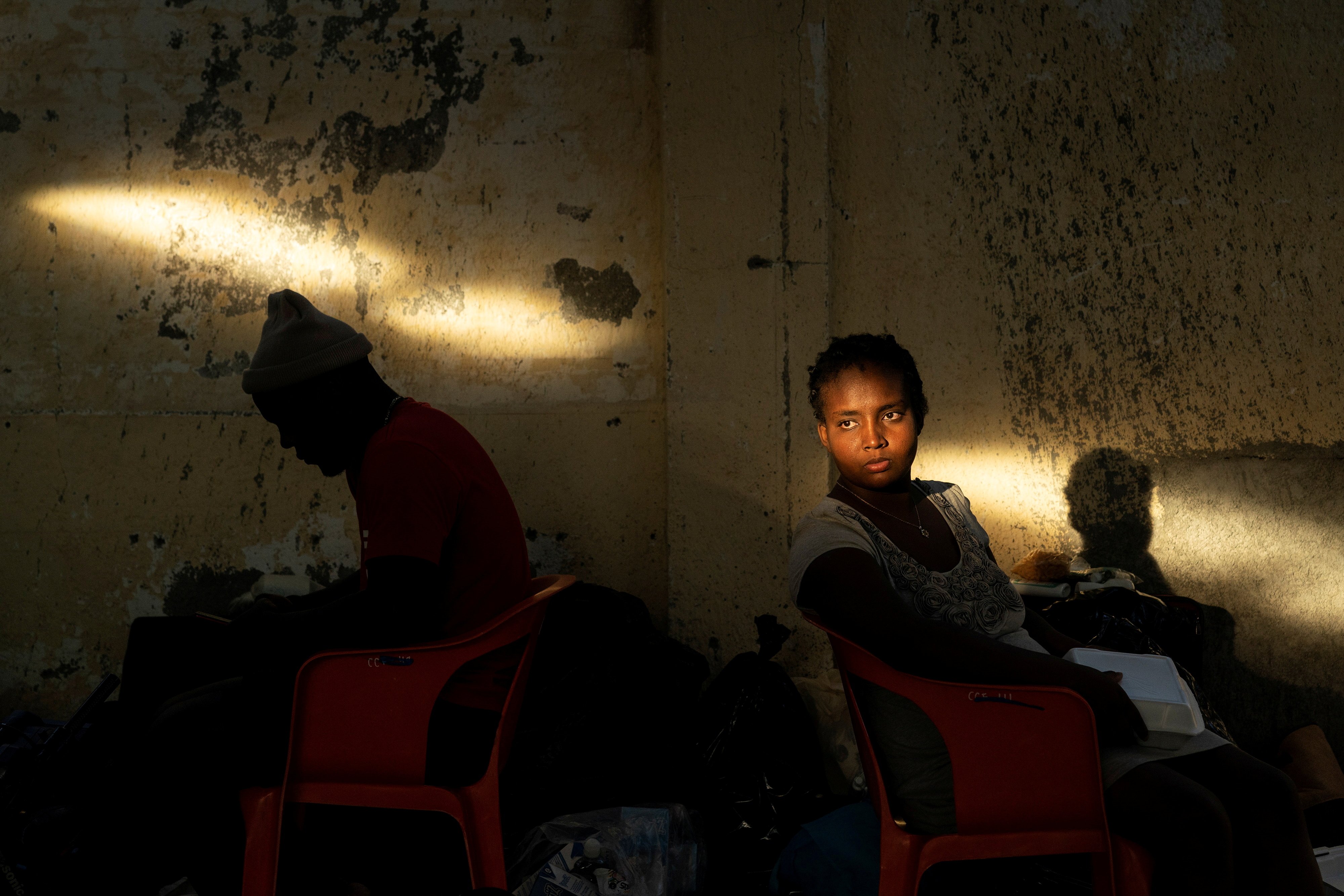 Migrants seeking asylum in the U.S., who returned to Mexican side of the border to avoid deportation, take shelter in Ciudad Acuna, Mexico, Sept. 24, 2021. (CNS photo/Go Nakamura, Reuters)

Panelists at one Sept. 27 forum during an online conference on immigration law and policy noted that the asylum process, like much else in the U.S. immigration system, is in need of its own fixes.

The percentage of those who fear being returned to their country of origin has leaped in a 12-year period, from 5% in 2007 to 43% in 2019, according to Ted H. Kim, acting associate director of the Refugee, Asylum and International Operations Directorate, or RAIO, which is a division of U.S. Citizenship and Immigration Services.

The period from 2016 to 2018, when Kim started working at USCIS, "saw really high numbers at the border, and 46% of those at the border consisted of family units," he added.

That does not take into account "unaccompanied children, trafficking victims, who must be transferred to HHS (Health and Human Services) custody within 72 hours," Kim said, "or the entire system risks being backed up ,including as recently as this past year."

A statute calling for "expedited removal" of immigrants was passed in 1996, but that was "designed for a different era when we did not see these huge numbers of arrivals at the border like we do today," Kim said at the forum, sponsored by the Catholic Legal Immigration Network and co-sponsored by the Georgetown University Law School and the Migration Policy Institute. "This has led to a backlog which is quickly approaching the program's all-time high in the late '90s."

He added, "Too often, we're on our heels in a reactive mode."

Kim said, "Over the last few years, RAIO has partnered with the U.N. High Commissioner on Refugees (UNHCR), Canada, Mexico to build up asylum systems in the region, and I think more of that is needed."

"The glimmers of functionality that we have seen on border are when the United States has turned to the UNHCR and actually treated this as a situation more suited for refugees," she said.

Peña, in addressing the role the UNHCR could play in the system, spoke of a temporary camp in Matamoros, Mexico, since closed by the Biden administration, that functioned as "a unicorn not many people know about. That experience could be a microcosm of something that could exist elsewhere."

"It was less about what fears or why you were there — at all. It was more about acknowledging the human dignity and the suffering that had taken place for a protracted period of time," she explained. "In 10 days I want to say maybe all but three or four individuals were processed into the United States. They had testing — COVID testing — but also (were) utilizing the community advocates and NGOs who for many months have worked in partnership with the asylum-seekers."

Peña decried the "violence and hatred" she said "is built into the immigration system," adding that as far back as 1904, Americans "rode on horseback as far as into California hunting down Chinese immigrants."

They bore a resemblance to the images captured in September of this year when Border Patrol deputies on horseback tried to stop Haitian migrants from entering an encampment on the banks of the Rio Grande in Del Rio, Texas.

"The atrocities against Haitians and Black persons that we saw in Del Rio (Texas) last week," Peña said, were summed up by one Haitian who exclaimed, "We were rounded up like cattle and shackled like criminals."

"This is actually who we are as a nation," Peña said. "These are the systems that we have built with billions of taxpayer dollars."

Like Peña, President Joe Biden and others in his administration accused the Border Patrol agents of brutalizing the Haitians. Some claimed they were whipping the migrants. The incident is being investigated, and Biden has already declared the agents "will pay."

But the photographer who took the images that caused outrage told a local Texas media outlet that the photos seemed to show this but that he and other journalists on the scene never saw any of the agents whipping anyone. Instead they were using reins to control their horses, which Raul Ortiz, head of the Border Patrol, confirmed with CNBC.

Another CLINIC panelist, Alvaro Botera, coordinator of the unit on refugees and forced displacement for the Organization of American States, said that "the U.S. government can be more innovative" when it comes to immigration.

"And yes, we need to get creative in almost normalizing or naturalizing refugees and migration movements. ... It is very clear that we are going to keep facing those things," he said.

Kim noted that USCIS's budget is "not generally reliant on appropriations." If Congress accedes to a Biden administration budget request, "that would be something new for us if it happens. The same for the affirmative asylum backlog. The president's budget request for 2022, put in money for backlog elimination — not just asylum but other caseloads."

As it is, Biden has said the United States will admit up to 125,000 refugees, a many-fold increase over the Trump administration's cap on refugee numbers. "We will have to hire up," Kim said.