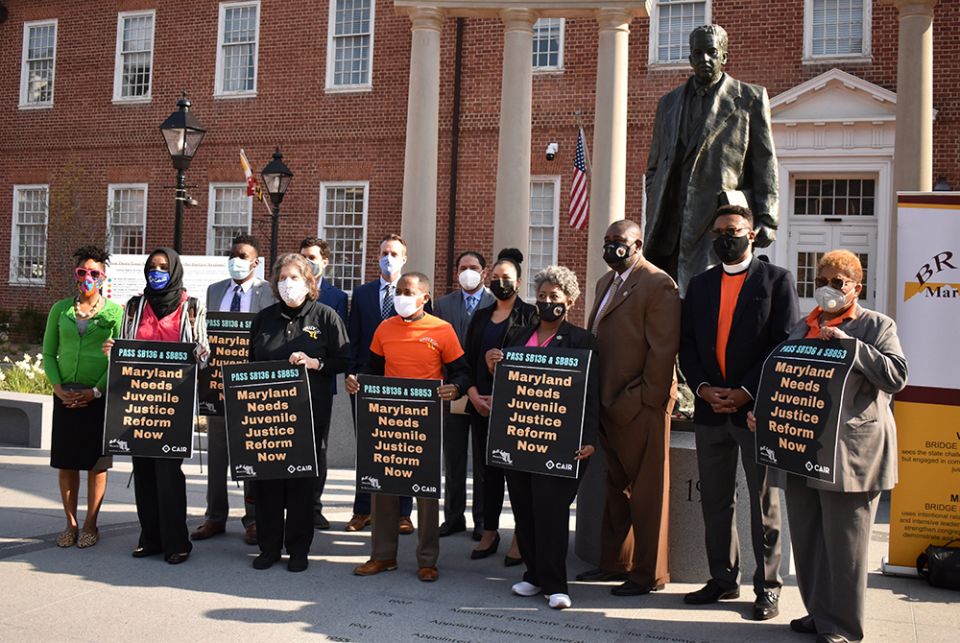 Legislators, community activists, and BRIDGE Maryland, Inc. leaders gather on Lawyers Mall in Annapolis, Maryland, April 8, for a news conference to encourage the Senate to pass the Juvenile Interrogation Protection Act. The Catholic Campaign for Human Development has funded BRIDGE Maryland since 2017. Its efforts are typical of the kind of grassroots work CCHD has supported since its establishment 50 years ago. (CNS/Courtesy of Rev. Marlon Tilghman)

When the Rev. Marlon Tilghman learned that any Maryland juvenile taken into custody can be questioned by police without a parent being informed or without an attorney present, his thoughts turned to his teenage granddaughter.

"God forbid if she got pulled over and got interrogated and she said something she wasn't supposed to say. I would be terrified," said Tilghman, pastor of Ames United Methodist Church in Bel Air, Maryland.

Tilghman has been working for the past year with dozens of partners in faith communities that belong to the grassroots organization BRIDGE Maryland to change state law, which observers have said is one of the most regressive in the nation. They cite cases where a child has felt pressured to admit to something he or she did not do.

New legislation became a priority of the group's Criminal Justice Task Force, which Tilghman co-chairs. The death of George Floyd has been a motivating factor, he said.

Ministers and congregation members mobilized around the legislation. They assembled online town hall meetings and coordinated a news conference. The events gave them the opportunity to use the skills in community organizing, personal empowerment, communications and relationship building they have learned with the help of a series of national grants from the Catholic Campaign for Human Development, or CCHD.

In this case, BRIDGE Maryland member congregations and its partners were instrumental in building support for the Juvenile Interrogation Protection Act, which was introduced in the Maryland legislature last year. The measure passed in the state House but failed by a narrow margin in the Senate. Currently BRIDGE Maryland is building statewide support for the bill since its reintroduction in January.

The Catholic Campaign for Human Development has funded BRIDGE Maryland since 2017. The organizing and educational efforts of the group's members are typical of the kind of grassroots work CCHD has supported since several influential U.S. church leaders established the anti-poverty campaign 50 years ago.

The campaign will host a two-day virtual celebration for its 50th anniversary May 14-15.

Originally known simply as the Campaign for Human Development, the program took shape in the late 1960s. It was created in the context of the civil rights movement by bishops wanting to respond to high poverty, intense polarization and the rioting that followed the assassination of Martin Luther King Jr., said Ralph McCloud, CCHD executive director at the U.S. Conference of Catholic Bishops.

The U.S. Catholic Conference, as the bishops' public policy arm was known then, wanted a program that would address the causes of poverty. Church leaders realized that charity alone was not enough to stop poverty and that a program that raised up the voices of people living in dire circumstances would lead to systemic change.

"It started [with] recognizing that the church did a really good job with the soup kitchens and the schools and the homeless shelters and the charitable works, but there was a lot that was still missing," McCloud said. The bishops who founded CCHD wanted to encourage community organizing so that people could come together and make their concerns heard.

After months of meetings and discussions among bishops, Detroit Cardinal John Dearden in July 1970 announced the formation of the anti-poverty campaign. The first collection occurred in November that year and has continued annually on the weekend before Thanksgiving ever since.

CCHD still abides by a rule that more than half the members of any organization that receives one of its grants must be people with low incomes. "Hearing their voices is essential," said McCloud.

Individual dioceses receive 25% of the funds collected to support local efforts. The remainder is allocated to larger programs after a thorough review of applications to ensure they fall in line with Catholic Church teachings, said McCloud.

CCHD annually distributes about $10 million to its grantees in community organizing and economic development grants, McCloud said. Currently, the campaign has about 220 grantees. Community organizing grantees can be funded by CCHD for up to six consecutive years, McCloud said, while economic development grantees can be funded for up to three.

The Catholic Campaign for Human Development's choice to award grants regardless of organizations' faith affiliations — instead of giving funds only to Catholic groups — has been criticized by some in the past, McCloud said. But CCHD's diverse partnerships create a "tremendous interdenominational and ecumenical effect," he said.

A page called "Truth about CCHD" on the U.S. bishops' conference website acknowledges that "CCHD and CCHD grantees have at times been subject to organized, exploitative attacks."

McCloud says some past criticisms have been linked to racism.

CCHD's commitment to working on immigrant issues and promoting immigrant rights may also be the source of some criticism, especially considering the current prevalence of anti-immigrant sentiment, McCloud added.

Auxiliary Bishop David O'Connell of Los Angeles co-chairs the bishops' subcommittee overseeing CCHD. He said he has seen the value of the kind of work CCHD supports since the late 1980s when he was a pastor in South Los Angeles, a poor community with a large minority population.

He said faith-based community organizing can help people realize they have the power to make necessary changes in institutions that perpetuate injustice.

"I love the work of the organizing," he said. "I love to have seen over the years that people think about themselves in a different way because of the work of the organizing. They begin to see themselves as leaders. They see that they are not victims. They think about (the question of) 'How do we have some relational power here to turn things around?' "

A version of this story appeared in the May 28-June 10, 2021 print issue under the headline: Catholic Campaign for Human Development turns 50 . 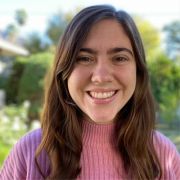 Lucy Grindon is an NCR Bertelsen Editorial Fellow based in New York City. Her email address is lgrindon@ncronline.org.