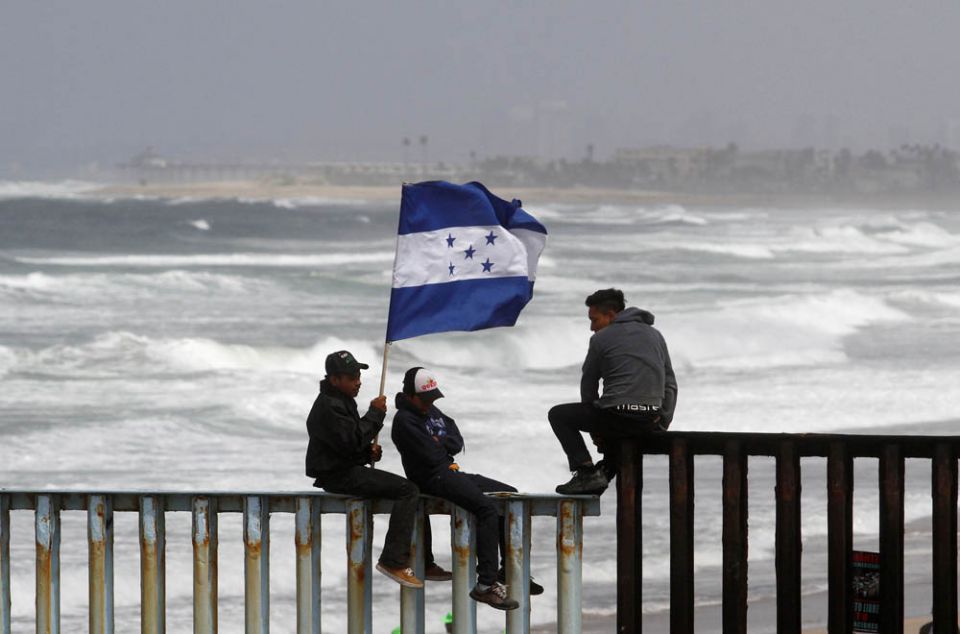 People hold a Honduran flag while sitting on the border fence between Mexico and the United States, April 29, in Tijuana, Mexico. (CNS/Jorge Duenes, Reuters)

Catholic groups who are tracking the current situation in Honduras said the Trump administration's May 4 decision to terminate the country's temporary protected status and send back 57,000 immigrants disregards extremely dangerous conditions in the Central American country.

"You could not look at those conditions and make that judgment call. That's not what was primary in their decision, in my opinion," said Jean Stokan, justice coordinator of the Institute Justice Team for the Sisters of Mercy of the Americas. "There's absolutely no conditions to go back … it's a furnace of violence."

When Honduras' status last came up for review six months earlier, advocates for its extension cited gang violence, displacement, lack of housing and jobs, disease outbreaks and subsequent natural disasters that have made the country unsafe and impeded recovery from the hurricane that prompted its designation.

Since then, conditions have worsened after a highly contested November election led to widespread civil unrest; dozens of protesters were killed, hundreds were injured and thousands were jailed after demonstrations were met with violence from military police, said Stokan.

Stokan most recently visited Honduras in late January as part of an ecumenical delegation to observe and accompany the protesters and faith leaders who had been threatened, such as Jesuit Fr. Ismael "Melo" Moreno Coto. She witnessed militarization and instability and heard about extreme gang violence from Sisters of Mercy in the country.

Lawrence Couch, director of the National Advocacy Center of the Sisters of the Good Shepherd, who also have sisters and affiliates in the country, was part of the same delegation. Couch said he saw "chaos and unrest" and "widespread discontent" in the country. "It was in this context that President [Donald] Trump has chosen to send back 57,000 Hondurans."

Hondurans have been covered under temporary protected status, which grants them work authorization and protection from deportation, since early 1999, shortly after Hurricane Mitch devastated the country in October 1998. The hurricane left one fifth of the population homeless, killed over 5,600 and destroyed infrastructure.

By law, the Department of Homeland Security is required to review conditions and renew a country's temporary protected status in six-, 12- or 18-month increments as many times as necessary if dangerous conditions persist.

"The disruption of living conditions in Honduras from Hurricane Mitch … has decreased to a degree that it should no longer be regarded as substantial," said a May 4 statement from Secretary of Homeland Security Kirstjen Nielsen. "Thus, as required under the applicable statute, the current TPS designation must be terminated."

But many advocates said the opposite was true. "As CLINIC laid out along with 640 different interfaith organizations, we believe that under the law the secretary was compelled to extend TPS for Honduras for 18 months," said Lisa Parisio, an advocacy attorney for the Catholic Legal Immigration Network, or CLINIC.

"The TPS program is designed to protect people from being returned to harm," the Leadership Conference of Women Religious said in a May 8 statement. "That is precisely what Hondurans will face if they are forced to return."

A May 4 statement from Alianza Americas, a network of immigrant organizations, pointed out that this January, the State Department warned that Honduras was unsafe for travel due to "violent crime and gang activity." The determination that Hondurans can return "runs counter to both the haunting realities in Honduras and to Americans' purported values of decency, compassion and humanity."

Advocates who urged extension also noted effects on the approximately 53,000 U.S. citizen children of Honduran protected status holders, who could be separated from parents who don't want to bring them to a dangerous country, and noted that status holders have jobs, businesses and homes that tie them to U.S. communities.

These deep U.S. roots could put temporary protected status holders in even more danger when they are required to return to Honduras Jan. 5, 2020, Parisio said. Returners with few connections in Honduras, who are perceived to have "American wealth" and U.S. relatives, "would be prime targets for those looking to extort and do harm to them."

Expelling the status holders could also further destabilize Honduras because one in six Hondurans depend on remittances sent from the U.S., Parisio added, resulting in "more people coming to the U.S. border seeking safety."

Exacerbating problems in Honduras, then refusing to help those who flee from them, is a pattern in U.S. policy, said Stokan.

Stokan pointed out that the U.S. recognized Honduran President Juan Orlando Hernandez's government after a coup in which he took power in 2009, and again recognized the election results in 2017 despite suspicious circumstances.

Also concerning for Stokan are Trump's disparaging comments about migrants who come to the U.S. seeking refuge, including a mostly Honduran caravan that recently traveled to the U.S. border to seek asylum.

"This is not about protecting U.S. people from some threat," Stokan said. "Of course we need borders. Of course we need to prevent criminals from coming in, but we're talking about families that are fleeing a country that's on fire."

This kind of rhetoric and action from Trump and his administration contributes to suspicions that temporary protected status decisions are being made on the basis of anti-immigrant sentiment rather than an analysis of country conditions.

"There's no rhyme or reason to it that I can tell besides this anti-immigrant posture," said Couch.

Honduras had received 18-month extensions each time its status came up for review under both Democratic and Republic administrations until the Trump administration disrupted that pattern six months ago. Then-acting Homeland Security Secretary Elaine Duke declined to make a renewal decision, resulting in an automatic 6-month extension.

Some advocates theorized that Duke recognized dangerous county conditions but was pressured by the Trump administration to end the status.

The Trump administration has also terminated the status for Nicaragua, Sudan, El Salvador, Haiti and Nepal, affecting about 310,540 people, while only extending it for 7,070 migrants from South Sudan and Syria. Decisions for 1,250 Somalian and Yemeni migrants are expected this July.

In many of its press releases announcing cancellations, although not in the most recent, the administration has called on Congress to legislate a pathway to legal status for temporary protected status holders, a call that advocates echo even as they doubt its sincerity.

"It's fine to say that; weigh in and help make that happen," said Stokan. She suggests advocates take a three-pronged approach to supporting temporary protected status holders: promoting legislative solutions, addressing root causes of migrants, and helping recipients regularize their status through other means if possible.

Advocates also called for a return to more welcoming values.

"To show a total disregard for the welfare of these people after they've been in our country for so long is unforgiveable," Couch said. "We were built on welcoming people, trusting people." To suddenly think of foreigners as evil or detrimental people who must be expelled is "not who we are as a people and we have to get beyond this current administration and get back to our values."