Pope hosted homeless people at his residence to interview him 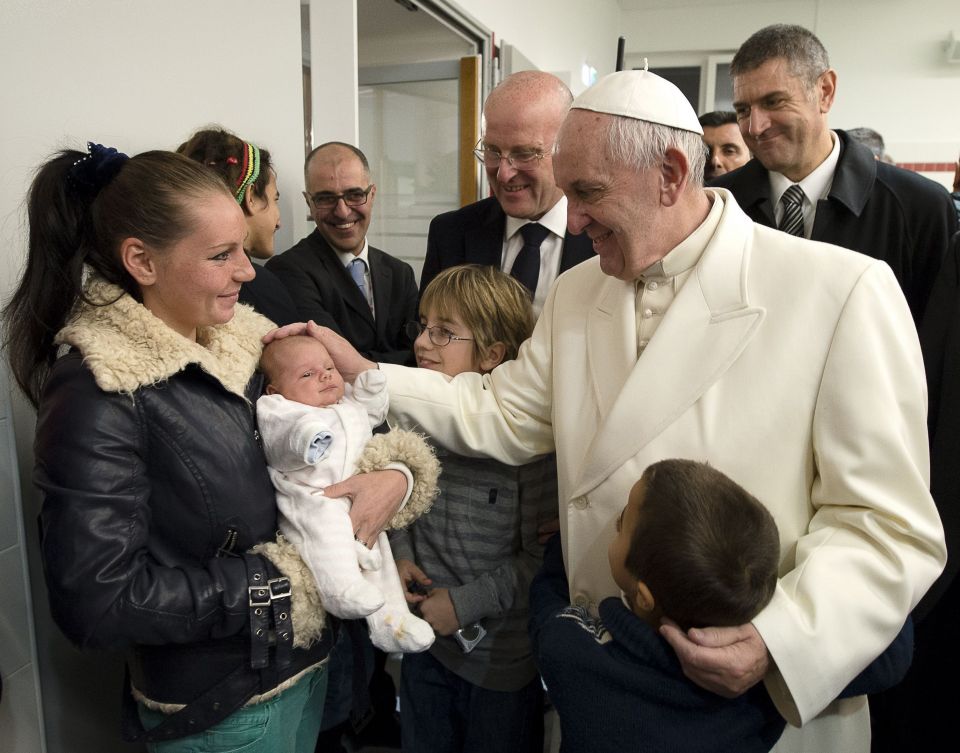 Pope Francis blesses a baby during a visit to a Caritas center for the homeless near the Termini rail station in Rome Dec. 18, 2015. (CNS photo/L'Osservatore Romano, handout)

VATICAN CITY — Dozens of people experiencing poverty and homelessness around the world got to ask Pope Francis any question they wanted.

"We gave him a little buzzer to use if he didn't want to answer. He never used it," Loic Luisetto told Agence France-Presse March 23. Luisetto is the director of Lazare, a France-based association that assists homeless people and coordinated the initiative.

The questions and the pope's responses in Spanish were condensed into a new book in French, titled "Des Pauvres au Pape, Du Pape au Monde" ("From the Poor to the Pope. From the Pope to the World"). Published by Le Seuil, it was to be released April 1.

The pope answered questions posed by homeless people from about 80 countries; the questioners included people from the slums in Brazil to people on the streets in India, Iran and the United States, according to AFP.

A smaller number of homeless people then asked the questions as a dialogue that spanned a total of nine hours over the course of several meetings in 2020 and 2021. The meetings were held first online because of the COVID-19 pandemic and then in-person, with the interviewer-guests invited to stay in the pope's Vatican residence, the Domus Sanctae Marthae.

Pierre Durieux, Lazare's general secretary, told AFP that they would bump into the pope as he went about his daily routine, seeing him "in the elevator or at breakfast with his tray."

"This closeness to him contributed to the family atmosphere of the interviews," Durieux said.

The pope confessed to his guests that he is "a real zombie" in the mornings right after he wakes up around 4 a.m., which means he sometimes falls asleep when he prays.

The poor have been a focal point of his papacy, as he chose the name Francis after St. Francis of Assisi, who lived in poverty, and said after his election that he wants "a poor church, for the poor."

"It hurts me that men of the church — priests, bishops, cardinals — drive in luxury cars and, far from giving an example of poverty, give the most negative of testimonies," he said in the book, according to the AFP.

The pope explained that he does not get paid, but "my poverty is fictitious, since I lack nothing."

"But it is still a bit absurd to have to ask ... it makes me less self-sufficient," he added.

Profits from the book sales will be donated to the non-governmental associations that collected the questions together with Lazare, according to AFP.

Justice | Pope hosted homeless people at his residence to interview him