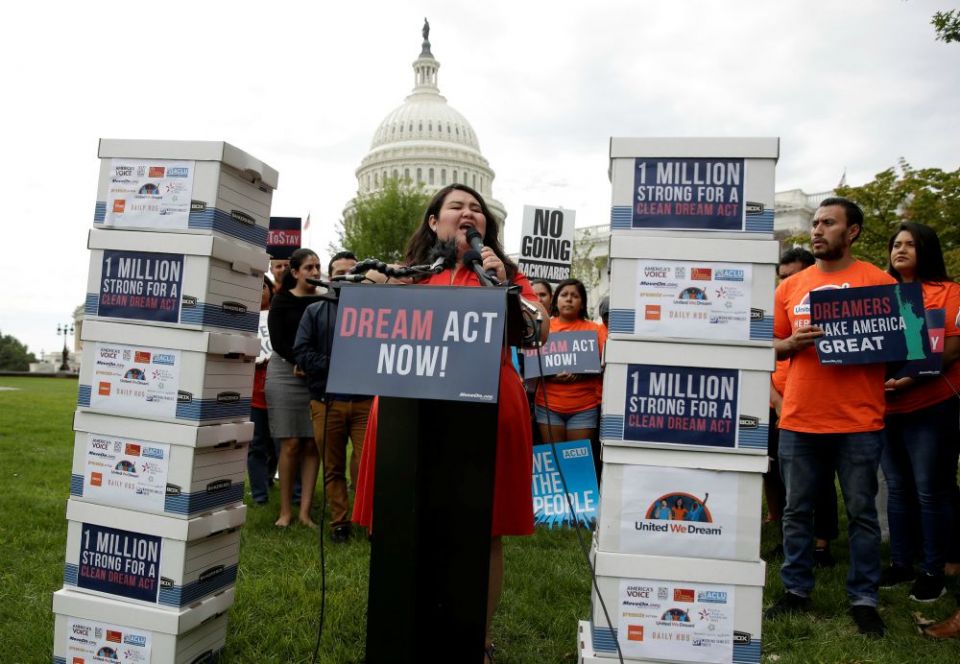 Rosa Martinez, an immigration activist and a recipient of the Deferred Action for Childhood Arrivals program takes part in a rally Sept. 12 in Washington urging Congress to pass the DREAM Act. Afterward, rally-goers went to Capitol Hill to deliver a million signatures to Congress. (CNS/ Reuters /Joshua Roberts)

Immigration activists say they are still committed to passing a "clean" Dream Act, without anti-immigrant measures attached, despite President Donald Trump's recent insistence that any legislation protecting beneficiaries of the Deferred Action for Childhood Arrivals (DACA) program be paired with his newly-released list of policy demands.

Trump's list, released Oct. 8, laid out a series of policies such as funding for a border wall, increased deportations and a shift to an employment-based immigration system, which DACA supporters denounced as not only harmful, but also a cruel attempt to pit immigrants against each other and use DACA recipients as political pawns.

DACA recipients, often called Dreamers after the bill which would grant them legal status, are young undocumented immigrants who were brought to the U.S. as children and temporarily have authorization to work and protection from deportation.

"We have these wonderful DACA recipients because of the sacrifices of their parents," said Samantha Searls, program director for the Intercommunity Justice and Peace Center in Cincinnati.* "To increase enforcement in exchange for protecting these young people does not make sense. It completely takes away the success of these young people if we deport their parents."

"People are already enculturated into our community, they're participating in society and church and life, providing for themselves, starting up companies, why tear this down?" Dominican Sr. Bernadine Karge, an immigration lawyer and advocate, asked. "I guess my basic question is where is the common sense, the common good and the mercy?"

Up to 800,000 Dreamers received authorization to work and temporary protection from deportation five years ago under an executive order from then-President Barack Obama which established the DACA program.

Trump ended DACA Sept. 5, although he allowed DACA holders with eligibility expiring on or before March 5, 2018, 30 days to renew their status, intending to give Congress six months to pass a bill protecting Dreamers. But if a bill passes under Trump's terms, Dreamers would exchange personal safety for policies that could target their families.

Trump's plan would increase enforcement within the U.S. by cracking down on visa overstays, employment of undocumented immigrants and "sanctuary cities;" increasing the number and authority of ICE agents; and expanding deportability.

Despite media reports that Trump had made an agreement with Democratic leaders that would protect Dreamers in exchange for some increased enforcement, but no border wall, the plan also includes funding for a wall along the southern border.

Of particular concern to activists are additional provisions for border enforcement that make it easier to deport especially vulnerable groups: unaccompanied minors and asylum seekers.

In an Oct. 10 statement, the Sisters of Mercy of the Americas said they were "especially outraged by the callous stance toward minors migrating from Central America" who are "trying to escape horrific violence" much of which is exacerbated by U.S. military and economic policy.

Meanwhile, Sr. Simone Campbell, executive director of NETWORK Lobby for Catholic Social Justice, called the provisions on asylum "the most egregious" and said they were possibly in violation of international law. The plan would make "credible fear interviews," which determine whether an asylum seeker gets a hearing in court, more strict.

At the end of the list is a call for a shift to a "merit-based immigration system" that would assign points to prospective immigrants based on skills, economic contributions and ability to assimilate while reducing the number of refugees admitted.

This would represent a dramatic departure from the current system, which prioritizes family reunification and places more emphasis on humanitarian concerns.

It would likely be concerning for Catholic groups such as the U.S. Conference of Catholic Bishops' committee on migration and the Ignatian Solidarity Network, which strongly criticized a bill Trump endorsed, the RAISE Act, that was introduced Aug. 2 and included the same principles.

However, Campbell said, as "horrifying" as these policies might be, they amount to a mere "list of conservative talking points" that need not enter into the conversation about DACA.

"I don't see this being the price of DACA because really what this talks about is the broader immigration system and that is extremely complex; will never be settled by March," she said.

"I'm for a totally clean Dream Act," Karge agreed. "This is just so ridiculous. You don't barter the lives of young people for a wall we don't need." Karge added that she sees a tide of support from the business, interfaith and educational communities. "I think if we go at it with the attitude that we will prevail we can do it," she said.

Patrick Carolan, executive director of the Franciscan Action Network, said there were "more than enough" votes in Congress to pass a clean Dream Act, and believes the president would sign such a bill.

Searls agreed that Trump would sign a Dream Act passed with bipartisan support. She pointed out that the version of the Dream Act in the House of Representatives has over 200 co-sponsors, some of them Republicans.

While hopes among Dream Act advocates seem high, many DACA recipients are also afraid of what might happen if the bill somehow fails to pass yet again.

According to Thomas Boerman, a consultant who specializes in societal violence in El Salvador, Honduras and Guatemala, this fear is reasonable. He said that DACA recipients deported to Honduras, Guatemala, El Salvador or parts of Mexico would face "grave danger" at the hands of "gangs, organized crime groups, corrupt police and sexual predators."

While these are risks for everyone in those areas, Boerman said, Dreamers would be recognized and targeted due to their lack of understanding of the "social dynamic," lack of family networks and presumed access to money and U.S. social networks that might pay ransoms.

Carolan also emphasized the dangers of deportation for DACA recipients. "This is really life or death," he said. "People have to stop claiming to be 'right to life' and support life if they don't support this."

However, some activists warned against panic over mass deportations.

Even if the Dream Act does not pass, said Karge, some Dreamers might be able to get green cards through family, marriage or work-based petitions. Others might be eligible for relief even if they are put in removal proceedings.

"I just hate how the media casts everything as the absolutely ultimate step, 800,000 being deported," she said. "Well, that's not going to happen. It's like getting every speeder on the highway when we're all doing 110."

Searls predicted that something would happen before March, if only a temporary fix. One option is a bill called the Bridge Act that would extend DACA for a few more years.

"Instead of creating a bridge it's like kicking the can down the road," she said. But it would at least protect DACA recipients for the time being.

Campbell suggested Dreamers might not be a deportation priority if DACA ends, and that due to the popularity of the program, Trump might decide to restore DACA if Congress did not take action "so he can do something of largesse and be the hero."

"The thing that's most painful, though, is the terror that it puts into the community," Campbell said. "Our people become terrorized by this in ways that are extremely painful and wrong. We're better than this as a nation. We need to step up and take care of our people."

The simplest way to do that would be to pass a clean Dream Act and deal separately with other complicated questions, said Campbell. "Let's have the immigration reform conversation, but let's protect Dreamers."

* The organization's name has been corrected.

The pope and the Donald: a recap of the border wall row