Labor unions rally in support of immigrants, against child detention

About 2,000 people came out in Philadelphia to support fellow workers 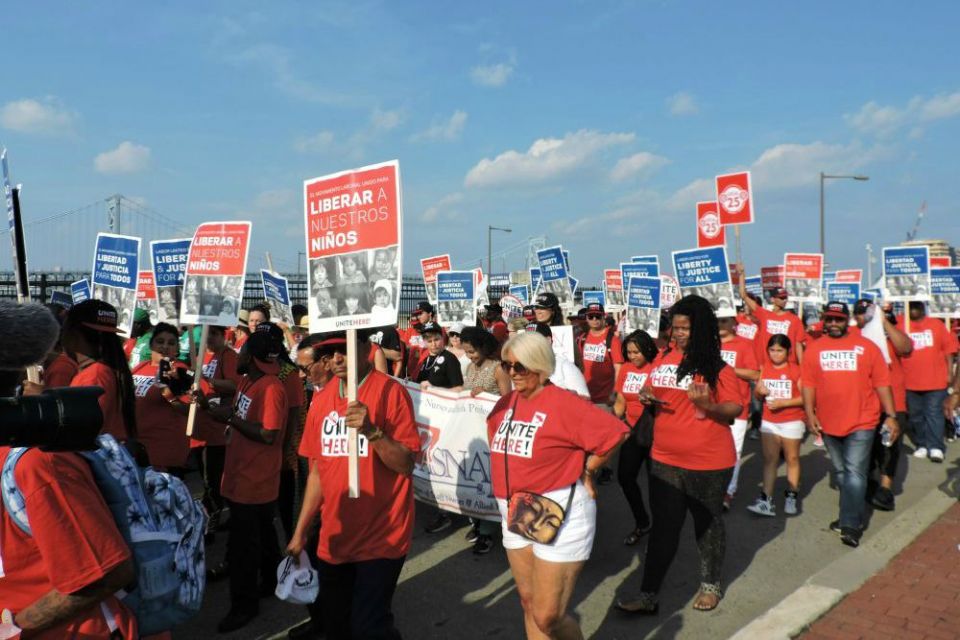 Union members march down Chestnut Street in Philadelphia Aug. 15 to a service in front of the U.S. Customs House, home to several federal agencies including U.S. Customs and Border Protection. (Elizabeth Eisenstadt Evans)

Philadelphia — In a show of unity and peaceful resistance under a steamy August sun, approximately 2,000 union members gathered to protest Trump administration immigration policies, making common cause on an issue that sometimes has divided them.

Sharing the stage Aug. 15 with union leaders and members of the broader faith community, Catholic clergy were prominent, a reminder of the church's longstanding advocacy for worker's rights as well as the bishop's outspoken commitment to immigrant reform.

"The bishops have always been supportive of family unity, going back to immigration reform, and they see separating families as against Catholic teaching," Antonio Cube, national manager of the U.S. Conference of Catholic Bishops' Justice for Immigrants: A Journey of Hope (or JFI) program told NCR after the rally.

Though the atmosphere at the "Labor United to Free the Children" rally was relaxed and peaceful, a sea of brightly-colored union logo T-shirts, signs and water bottles, the participants didn't hesitate to loudly applaud or join in chants like "free the children."

On the stage, a teenager whose family has taken sanctuary in a North Philadelphia-area church, and the young daughter of an undocumented Philadelphia mother shared their experiences, reminding the crowd why they had assembled.

When his union president suggested sending member delegations to the border, said Kiley, he had an alternate proposal: A gathering of union members to protest separating immigrant families. "It's clear that working people find this policy immoral and reprehensible," Kiley said.

In fact, he added, "just about every religious denomination has said this policy was immoral. That's why the labor leaders said we really want to have faith leaders with us. They hold the moral high ground."

Though Philadelphia Mayor Jim Kenney, who also attended the rally, has refused to cooperate with the administration's hardline immigration policy, Philadelphia was chosen in part because of the refusal of Immigration and Customs Enforcement (ICE) to offer bail to the immigrants it detains, and the fact that the state also houses a family detention center, he added.

A ProPublica report from April found that ICE makes more arrests of immigrants without criminal records in the area than anywhere else in the country.

Seated on the platform as a representative of the Association of U.S. Catholic priests, Fr. Robert Bonnot said that his organization had long advocated for comprehensive immigration reform.

"That has not unfolded, and we have this tragic situation of parents being separated from children. It seemed like an appropriate opportunity to be present at a gathering that is protesting this practice. I would hope that it would raise the awareness of people who may not be aware of what is going on and still uncorrected," said Bonnot, a retired pastor from Youngstown, Ohio.

Most Americans don't think of the country as being this kind of an inhumane place, he said. Praising the interfaith group participating in the rally and the subsequent, service, he said: "That is one of the really dramatic turnabouts of the Catholic Church since the Second Vatican Council. We do not see ourselves as standing alone."

Mary Laver, a member of Philadelphia's St. Vincent de Paul Catholic Church and an organizer with the interfaith community organizing group Power, called the event "momentous," and an opportunity for religious leaders to publicly support unions standing up for the rights and dignity of workers.

"As a Catholic I think that if I am embracing human life I must be in favor of policies that nurture children and stand in solidarity with families seeking just working conditions and the basic right to be in a place where they can thrive." 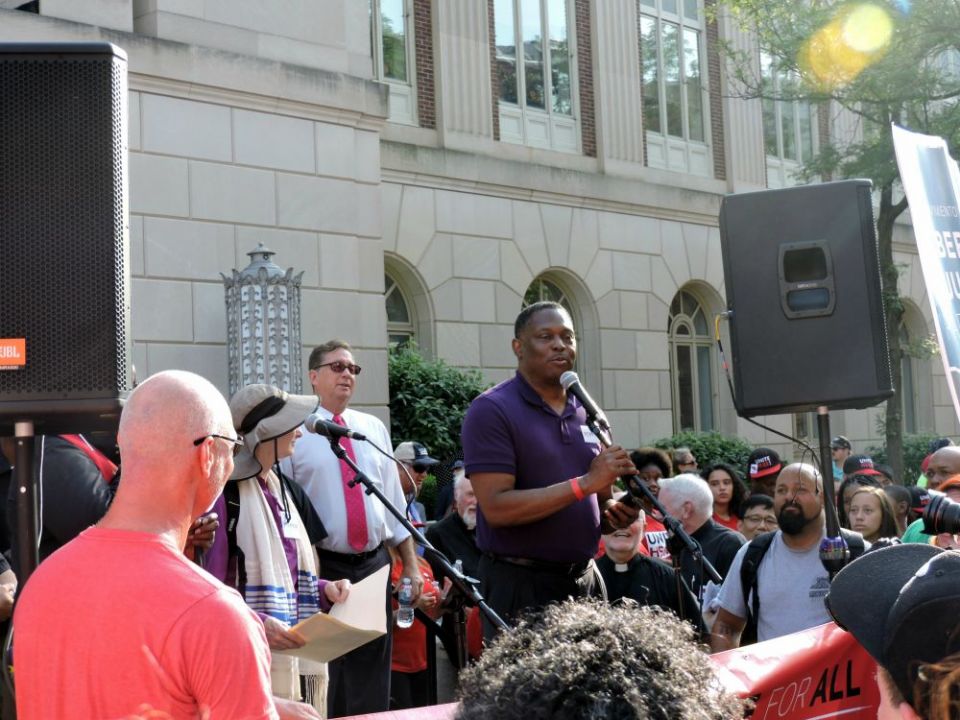 Labor-faith collaborations aren't unusual in Philadelphia, or in other parts of the country, she pointed out, noting that Power is part of a larger group, Faith in Action. While it's not rare, "it's especially critical to do it publicly at this time when a number of challenges to the well-being of the immigrants and the poor are coming so quickly."

Rabbi Mordechai Liebling, who direct the social justice organizing program at the Reconstructionist Rabbinical College in Wyncote, Pennsylvania, gave the final blessing at the interfaith service in front of the local ICE office following the march.

The clergy who participated in the rally and the subsequent service had deep ties to the labor movement, he said.

"It's pretty clear, from a theological perspective, that the Abrahamic religions believe in the dignity of workers," said Liebling.

In the Jewish tradition, the Talmud (the oral and written source of Jewish law) offers evidence that workers banded together to act and demand a fair wage for their labor, he said. Hebrew scriptures also underline the dignity of work and the importance of a fair wage.

The rally garnered support from a diverse assortment of private and public sector unions.

Liebling said he was encouraged that so many unions decided to participate. "Some of them are not as supportive of immigrants and the undocumented. To have this kind of a coalition is a strong statement, maybe the strongest statement in a long time in support of immigrants."

"They [the administration] use children as pawns. That's immoral. Some may even think it's a crime against humanity," said Kiley. "A lot of labor unions are pretty hard-nosed, but when they saw a 1-year-old kid having to defend themselves or sitting in a cage, it was too much." 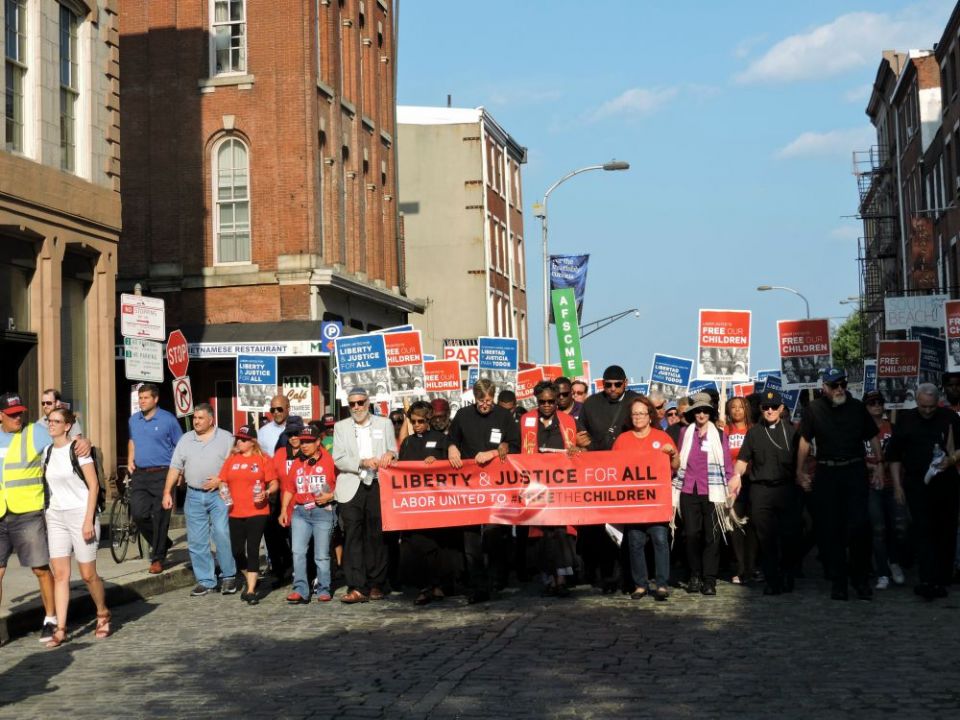 A group of interfaith clergy lead the crowd of union members up Chestnut Street in Philadelphia to a service in front of the U.S. Customs House, home to several federal agencies including U.S. Customs and Border Protection, Aug. 15. (Elizabeth Eisenstadt Evans)

Labor leaders seemed very happy to have the support of the faith community. "It's always good to have God on your side," boomed D. Taylor, international president of Unite Here, from the stage near the conclusion of the rally.

Cube sad, "It was nice to see that the experiences of families living in fear of separation was held up," noting the youth of some of the speakers from immigrant families.

"A lot of people read about it in the newspapers … but to see it in the face of a young child personalizes it. It's awfully sad that it is happening," Cube said, adding that he returned to his office eager to suggest to the bishops that they consider sharing more of these personal stories.

"I was just so impressed by the energy the union folks presented at the rally," said Cube, who added that it was comforting to see a broad section of the United States population coming out in support of immigrants. "I'm comforted by that. There was very much the sense that labor was supportive of keeping families together."

A member of the African Methodist Episcopal Church, Kenneth Rigmaiden president of the International Union of Painters and Allied Trades, said that a lot of his members were people of faith, and that his union often aided congregations on their "action days of service." "We need to be supporting each other."

Standing in a patch of shade slightly apart from the hubbub, Araceli de la Cruz, one of the speakers, said that she had been reluctant to come, but was persuaded by her coworkers that it was important to take a public stand. A recipient of Deferred Action for Childhood Arrivals status that grants work permits and protection from deportation to young adult immigrants who were brought to the U.S. without permission as children, she is a housekeeper in a local hotel; she said that she had felt safe in America until the Trump administration took office.

"He's got to have a heart somewhere in there to feel what we feel, so we can change his mind about what he's doing," she said. Though her children keep her going, she has moments of great sadness, worried that one day she will leave home in the morning and not return to them.

As she was speaking, her eyes filled with tears.