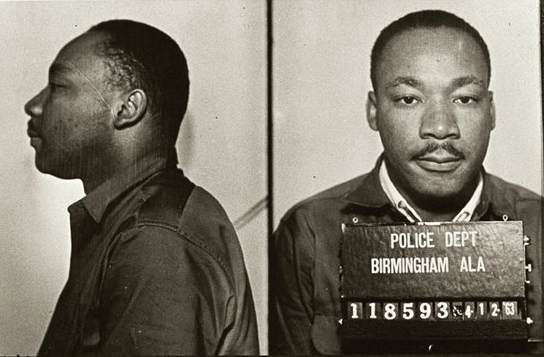 I'm writing on the 50th anniversary of the assassination of Dr. Martin Luther King, Jr. There is a lot of commentary today on how we forget Dr. King's passion for poor people, for victims of war, for all the unpopular causes that comprise the work of acting for justice and seeking peace. And, yes, we also forget how much time he spent in jail cells and church meeting halls and engaged in scholarly study.

In the '80s, during a St. Louis campaign against nuclear weapons made by General Dynamics, we read "Letter from a Birmingham Jail" out loud at several vigils. It is a long, thoughtful, analytic essay, not a bumper sticker. King was arrested in Birmingham on Good Friday, April 12, 1963, along with 2,000 other men, women and children. On Holy Saturday, he read in the Birmingham newspaper a public criticism of his non-violent resistance to racism. It was written by eight white, Alabaman clergymen.

He began writing his response on the sides of the newspaper. Visitors smuggled scraps of paper to him and smuggled his scraps out to a local church, where the pastor and his secretary pieced the scraps together, trying to make a coherent statement. The letter was first published in three different journals that June.

Meanwhile, by Easter Monday, Harry Belafonte had raised $50,000 for bail so that anybody who wanted to get out of jail would be released. Dr. King wanted to stay locked up. He thought Bull Connor had overreached himself, and everybody who could should just stay put in jail and let Connor try to figure out what to do next.

But Robert Kennedy, Attorney General, wanted King out. Kennedy was afraid that King's continued imprisonment would result in mob violence. But when Belafonte told Kennedy that King was in solitary confinement with no mattress or blanket, sleeping on metal slats, Kennedy replied, "Tell Dr. King we are doing all we can, but I'm not sure we can get into prison reform at this moment." (Taylor Branch tells that story on page 735 in Parting the Waters.)

Kennedy got his way, so King was only four days in jail that time, and one product was King's masterful letter about direct action. It's reprinted in full in Dr. King's Why We Can't Wait. It is not an easy read, but it's worth the effort.

Capitol insurrectionists: I have met them before