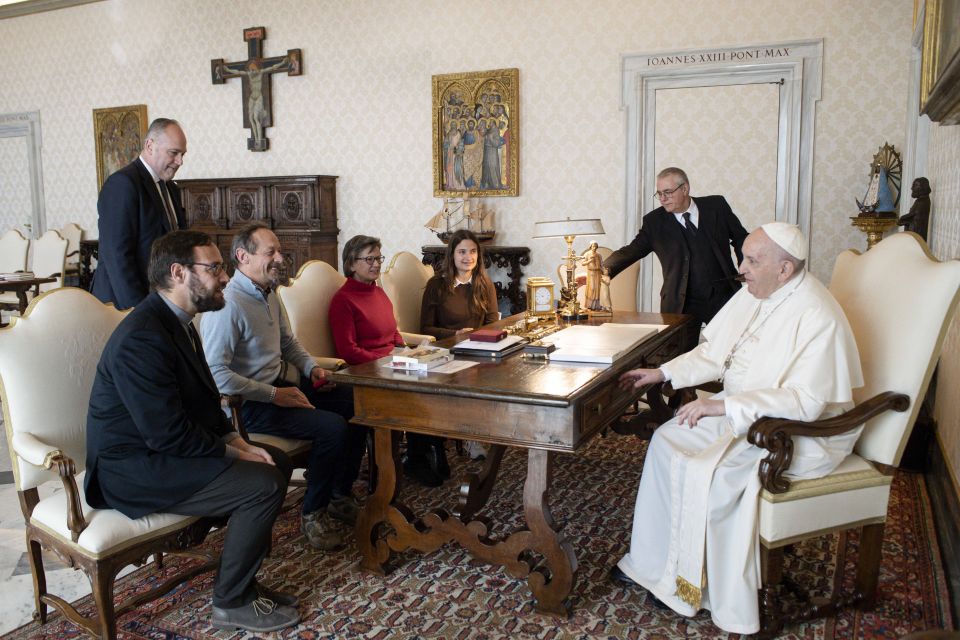 VATICAN CITY — Ready to return to South Sudan after nearly a year of recovery from being shot in the legs, Bishop-designate Christian Carlassare of Rumbek met with Pope Francis.

"The pope just told me not to be afraid because the Lord provides, and then he gave me his blessing," the bishop-designate said in an interview March 16 with SIR, the news agency of the Italian bishops' conference.

The 44-year-old Italian bishop-designate met with Pope Francis March 14 at the Vatican ahead of his episcopal ordination in Rumbek March 25, the feast of the Annunciation.

Bishop-designate Carlassare, who is a Comboni missionary, has been ministering in South Sudan since 2005 and was named vicar general of the Diocese of Malakal in 2020.

In March 2021, Pope Francis appointed him to be the new bishop of Rumbek, which had been without a bishop since the sudden death of Bishop Cesare Mazzolari in 2011. After he arrived in Rumbek in mid-April for his episcopal ordination, which was scheduled for May, two gunmen broke into his residence shortly after midnight April 26.

He had tried to talk to the men, "but they cocked the gun and shot me in the legs. Then they fled. They were not here to steal or kill me because they would have killed me easily," he had told Fides, the news agency of the Congregation for the Evangelization of Peoples.

While police in Rumbek arrested some three dozen people after the incident, further investigations and evidence recently led a court in Juba, South Sudan's capital, to indict at least four people, including Father John Mathiang Machol, who was charged with inciting and plotting the attack. The priest, who had been the diocesan coordinator, has denied the charges.

In a letter addressed to the people of his diocese, Bishop-designate Carlassare said he was returning to South Sudan "with feelings of renewed trust in my heart both to God who never abandons, and to the local church and Christian community in order to walk together hand in hand."

While the church in Rumbek suffers from a lack of security and resources, "it can count on the solidarity and resilience of the people. It is a wounded and suffering church, but there is no lack of faith and hope in healing. It is a young church that has a long way to go before it. It is a fragile and imperfect church that experiences the compassionate love of God and is called to be a witness of mercy," he said in the letter, published on the Comboni website March 15.

Having his ordination scheduled for the feast of the Annunciation, he wrote, is a gift and a call for him to "to repeat my 'yes' to the church and people of South Sudan in a way that is perhaps a little more radical than I have managed to live up to now."

"I pray that the people of Rumbek may also say their 'yes' to the church's journey that is to be made together. For this I entrust myself to the Lord and to your prayers," he wrote.

The death of Fidel Castro

Hundreds march for voting rights, justice near US Capitol; 200 arrested