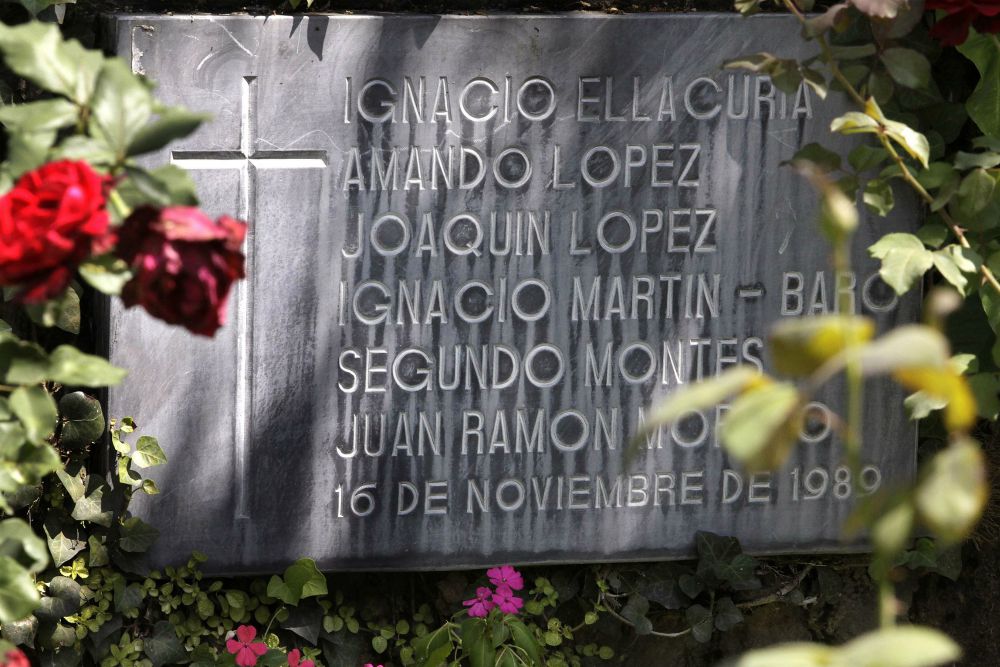 A stone bearing the names of six Jesuits massacred in 1989 is seen at Central American University in San Salvador, El Salvador, Nov. 16, 2009, the 20th anniversary of their deaths. The priests, their housekeeper and her daughter were killed at the university by members of an army unit during a military offensive. (CNS/Reuters/Luis Galdamez)

In a move that seemed timed for maximum effect, the U.S. Supreme Court announced Nov. 15 — the eve of the 28th anniversary of the Jesuit massacre in El Salvador — that it had cleared the way for a former Salvadoran colonel to be extradited to Spain to stand trial for the atrocity.

The announcement came just seven days after U.S. Solicitor General Noel Francisco filed a brief with the high court, urging it not to block the extradition of ex-Col. Inocente Orlando Montano, a member of El Salvador's military High Command at the time of the massacre.

Montano has been fighting extradition for some two and half years, denying his role in the 1989 assassinations of six Jesuit priests, their housekeeper and her daughter. ​

Montano entered the U.S. in 2002, falsely stating on immigration papers that he had never been a member of the Salvadoran military. In fact, he had been the Vice Minister of Defense and Public Safety, in command of the National Police, the Treasury Police, and the National Guard.

After a human rights group exposed him, he was arrested and convicted in 2013 for immigration fraud and perjury and served time in North Carolina before being brought into federal court in connection with an extradition request from Spain. Five of the six slain priests were Spanish citizens.

In a landmark ruling in February 2016, Federal Magistrate Kimberly Swank ordered his extradition after detailing his role in massacre. Montano appealed to the 4th Circuit Court of Appeals, which 18 months later upheld Swank's ruling.

Last month, Montano appealed to the Supreme Court for a stay of extradition, which is now pending, but given little chance to succeed by lawyers familiar with the case.

On Nov. 8, Francisco weighed in with a 29-page brief, urging the high court to deny the stay.

Francisco, who supervises U.S. government litigation in the Supreme Court, noted that lower courts have discarded Montano's arguments, adding that "no reason exists to delay extradition" and that Montano can continue to make his arguments to the Spanish court.

He also noted that the Undersecretary of State for Political Affairs has signed a surrender warrant authorizing Montano's extradition to Spain — a key point as the State Department has final say on all extradition cases.

Timely compliance with Spain's request "advances the United States' foreign policy and law enforcement interests," Francisco wrote, and "Spain is an important partner of the United States in terrorism."

After Spain indicted Montano for "terrorist murder," Francisco stated, it sent an extradition request to the U.S. along with evidence showing that in the days leading up to the murders, the military-controlled radio station that Montano supervised made threats against the priests; that on the day before the murders, Montano participated in a meeting of the High Command where the order to kill them was given and provided the assassins with the location of one of the priests; and that following the murders, he attempted to conceal the miltary's involvement by threatening the wife of a witness.

The priest whose location Montano supplied to the killers was identified in the Swank ruling as Jesuit Fr. Ignacio Ellacuría.

Ellacuría was the rector of the University of Central America when the U.S.-trained commandos shot the priests in the back of the head with high-powered weapons. They also executed their housekeeper, Julia Elba Ramos, and her teenaged daughter, Celina. Ellacuría and Jesuit Frs. Ignacio Martín-Baró, Segundo Montes, Juan Ramón Moreno and Amando López were citizens of Spain. The sixth priest, Joaquín López y López, was from El Salvador.

At the time, Ellacuría was a key negotiator in peace talks between the U.S.-backed rightwing Salvadoran government and the Farabundo Martí National Liberation Front (FMLN). The military radio station that Montano oversaw called Ellacuría "an armed terrorist and an intellectual figurehead for the rebel FMLN."

Francisco noted that Spain classified the Jesuit murders as terrorism under a law that applies the term to those "who acting as members of armed gangs or terrorist or rebel organizations, or collaborating with their purposes and goals, commit any criminal act using fire weapons or other destructive devices."

Spain found that Montano "was a member of a qualifying armed gang" based on evidence that he was "a member of a group of officers" who commissioned the "highly armed and trained Atlacatl Battalion," to kill a group of civilians.

Records show that 19 of 26 officers cited for the Jesuit massacre by the U.N. Truth Commission were graduates of the U.S. Army's School of the Americas, now known as the Western Hemisphere Institute for Security Cooperation. Montano was not only a graduate of the Army school, but also of the Jesuit university where the priests were executed.

He will be the highest-ranking official in recent history to be extradited by the United States for human rights violations. It was not immediately known just how soon Montano will be put on a plane to Madrid.

One of the arguments Montano used to argue why he should not be extradited was that it would impinge on El Salvador's sovereignty. But not only has El Salvador never sought his extradition, neither has it refused to extradite any of the other officers also indicted by Spain for the massacre.

Law professor Patty Blum, part of the human rights team that brought charges against Montano in Spain, praised Francisco for "cogently rebutting the claims Montano has argued again and again."

Blum, the board chair for Guernica 37 International Justice Chambers, was deeply satisfied by the Supreme Court’s decision and its timeliness, which she said is "a reminder that at the heart of this legal battle is a horrendous crime that long has cried out for full justice."

[Linda Cooper and James Hodge are the authors of Disturbing the Peace: The Story of Father Roy Bourgeois and the Movement to Close the School of the Americas.]​

A version of this story appeared in the Dec 1-14, 2017 print issue under the headline: Supreme Court clears way for Salvadoran colonel's extradition.