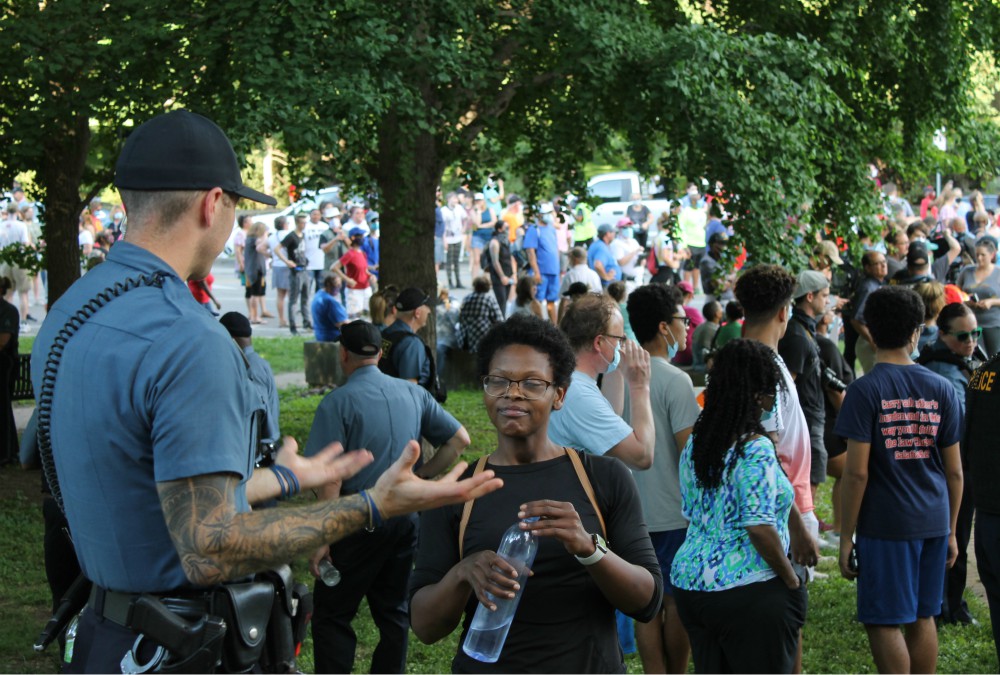 Justine Kenner speaks with a police officer ahead of a "Unity March" in Kansas City, Missouri, June 3. (NCR photo/Brian Roewe)

The sixth day of demonstrations here in response to the death of George Floyd in Minneapolis was the second time that Justine Kenner took part.

The 24-year-old black woman was among several hundred who gathered for a "Unity March" June 3 from Southmoreland Park a block west to the Country Club Plaza — what has become the local center of unrest in response to Floyd's killing by a white police officer and other fatal encounters with police around the country and in this city as well.

Kenner and a friend spoke with a white police officer before the start of the march, which was organized by religious leaders and the Kansas City Police Department. She asked what he thought about the protests and why people continued to gather night after night. She said it was a good dialogue, though they "definitely disagreed on a few points."

The exchange in the park contrasted sharply with her encounter with police three days earlier. Then police deployed tear gas and used pepper spray on the crowd after some people began throwing objects. A friend used milk to wash away the sting that burned across Kenner's face.

Wednesday marked a second consecutive peaceful night after tear gas plumes filled the streets over the weekend at the upscale shopping district, one of the country's oldest such venues and itself a symbol of some of the history of racial divisions and redlining in the city. 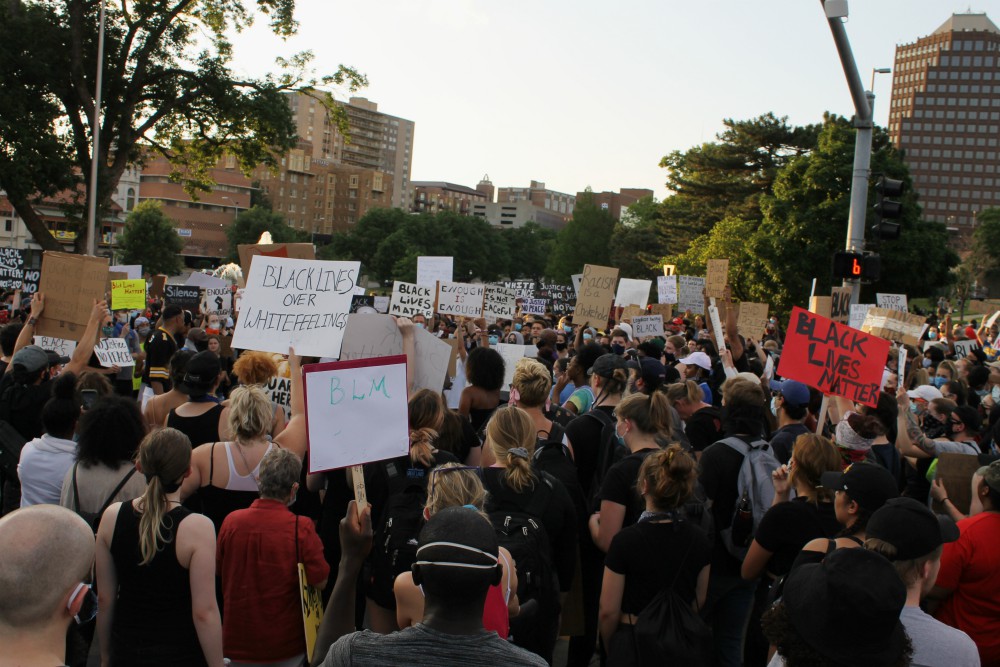 The unity march aimed to bridge some of the divide between the police and protest lines that have formed in the past week. Some chanted. Some dialogued. Still others formed a counterprotest near the end, skeptical of the march as just a gesture and not a step toward the sweeping reforms to address systemic racism in America.

Kenner said the event was important, "but I don't want the call for unity to speak louder than the call for reform and accountability."

On Thursday, Mayor Quinton Lucas announced sweeping changes for how the police investigate themselves, and directed police Chief Rick Smith to conduct a review of the department's use of tear gas and other measures used during the protests.

Before the march began Wednesday, Smith announced to the crowd that the city had secured funding for police body cameras — one of the demands outlined in recent days. Later, he sat at a tent, as did other officers, and held one-on-one conversations with protesters. Other police officers talked with people in the streets.

That included Officer Mary McCall, who has worked every day of the protests.

She called Floyd's death "devastating" to both civilians and police officers. McCall said there's always more the police can do to be better, but she also sees many officers in her department that are doing good work.

"Nobody wants to be put in that same category of a bad cop," she said.

As a community interaction officer, it's McCall's job to connect the police with the neighborhoods they serve, and to create interactions outside of confrontational situations. The march provided such an opportunity for dialogue, one that hasn't been as available during the demonstrations.

"We've got to be open and communicate with each other and know we're on the same side," McCall said. 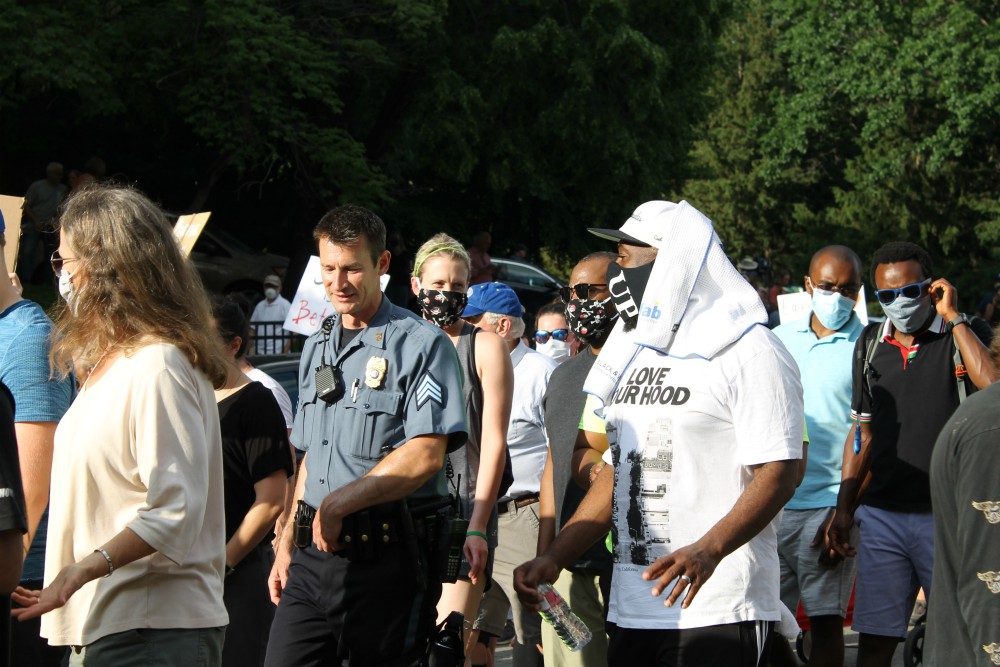 A Kansas City, Missouri, police officer walks with protesters during a "Unity March" June 3 in response to the death of George Floyd in Minneapolis. (NCR photo/Brian Roewe)

Kenner said she hopes the protests send the message that people, especially those of color, want more accountability from their police and their government for what they're doing to their constituents, "the people that they're supposed to serve and protect."

Fr. Kent O'Connor readily admitted he has much to learn about racism. That's why he accepted the invite from friends to join them at the march. Demonstrations, whatever the cause, are not places he's normally comfortable.

"I bring my ears more than anything," said the pastor at Good Shepherd Catholic Church in suburban Shawnee, Kansas.

He has begun addressing issues of racial disparity on the parish's Facebook page and in the virtual homilies and talks he delivers there. He has begun reading White Fragility, the Robin DiAngelo book that's currently the No. 1 seller on Amazon.

"Now I'm learning phrases like 'What does white fragility mean?' 'What does systemic racism mean?' All those things I really should know, but I need to do some catch-up work," O'Connor said. 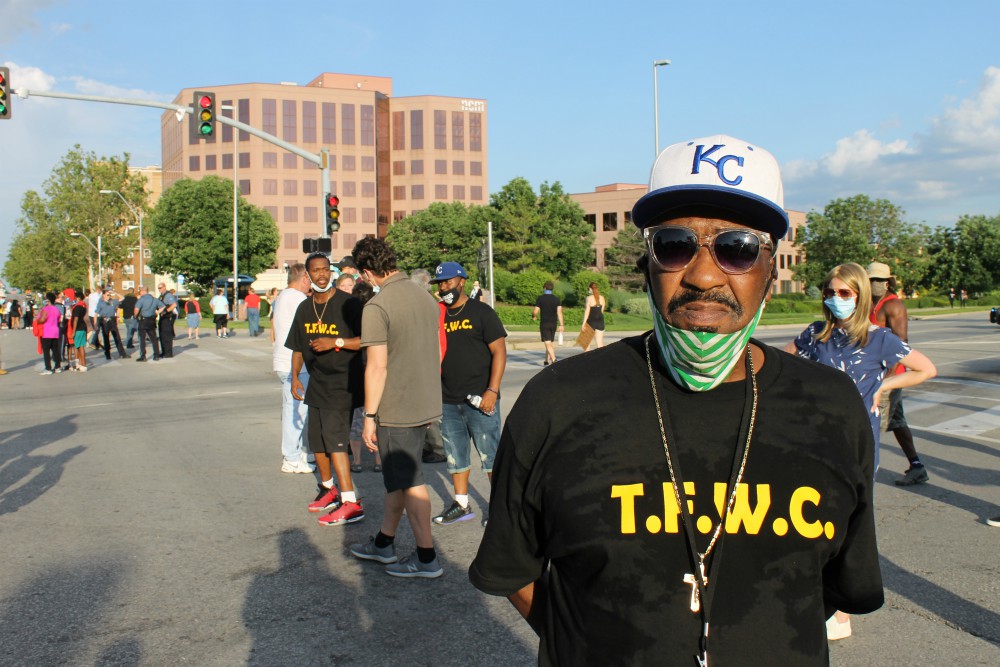 Noah Birch: "This is beautiful," he said of the crowd gathered. "You can see people all fighting for the same cause. But now we must take it to this," pointing to his heart. "Once it hits this and it blossoms, that's when you'll see a change." (NCR photo/Brian Roewe)

The outcry over Floyd's death and others is nothing new for Noah Birch. He grew up in the South, where he saw a relative hung in a tree, and remembers the National Guard riding through the streets of Kansas City in 1968. Now a mentor for young black men, he said things won't get better until people move beyond a selfish mentality and "come to the understanding that we must share in order to get along."

"This is beautiful," Birch said of the crowd gathered. "You can see people all fighting for the same cause. But now we must take it to this," pointing to his heart. "Once it hits this and it blossoms, that's when you'll see a change."

As the night continued, the march returned to protest. People walked through several neighborhoods chanting, "Hands up, don't shoot" and "I can't breathe." Some kneeled in the streets and others lay with their hands behind their back. The feelings of community and fighting for their rights is what led Kenner to return for a second night. If they stop fighting, she said, the movement will, too.

"Even tragedies can set beautiful things in motion."