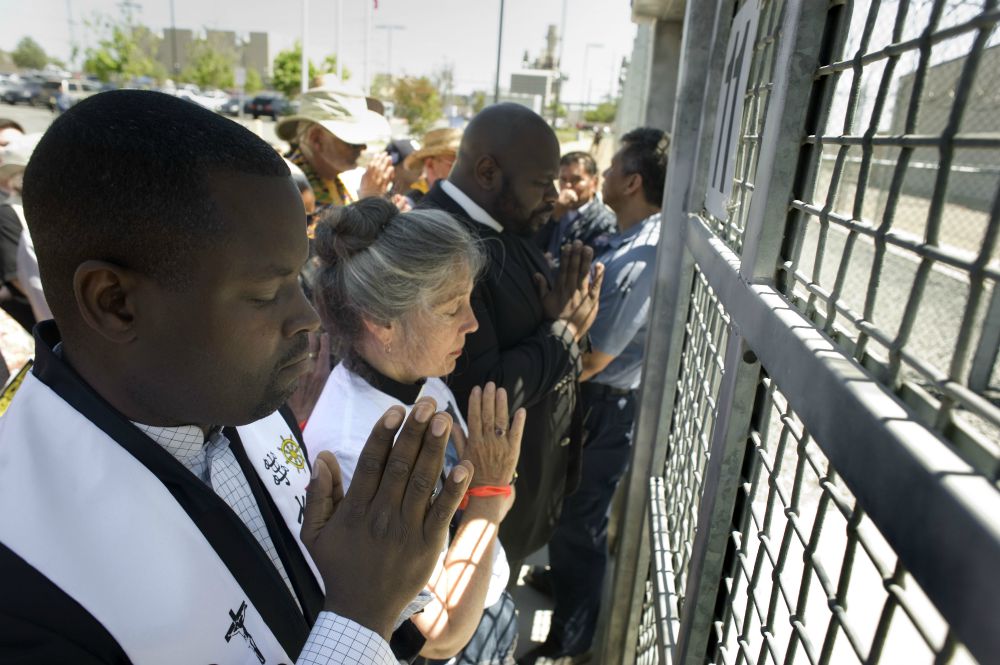 Clergy from different denominations pray at the front gate of the Otay Mesa Detention Center in San Diego during an early June rally in support of immigrant families that had been separated at the U.S.-Mexico border. (CNS/EPA/David Maung)

Compared to most detained immigrants, mothers and children at the South Texas Family Residential Center in Dilley, Texas, are lucky. At least they have legal representation.

The Dilley Pro Bono Project is able to offer legal aid to nearly all who need it at the 2,400-bed facility as the detained people prepare for "credible fear" interviews that determine whether they will be allowed to pursue full asylum cases. Passing the interview means being released from detention — something that's not always a given for detained adults.

U.S. Citizenship and Immigration Services defines "credible fear" as a "significant possibility" that the immigrant will be able to convince a judge he or she had been persecuted or has a "well-founded fear of persecution" due to race, religion, nationality, membership in a particular social group or political opinion if forced to return home.

But many residents of other detention centers aren't so fortunate — and the situation isn't simple — even for those with representation. Legal service providers who represent detained migrants report a long series of hurdles that make it difficult to effectively represent their clients and to recruit additional aid for immigrants.

A major challenge for representation is that detention centers are usually located far from urban areas where most immigration attorneys live. Lawyers "have to travel hours just to get to the client," said Michele Pistone, director of Villanova Law School's Clinic for Asylum, Refugee, and Emigrant Services. The two closest detention centers to Pistone are located about 80 and 120 minutes away.

The speed of immigration cases in detention, which are expedited, can also be a challenge for attorneys, Pistone said. They have to gather evidence located in another country and establish trust with a client who might be uncomfortable discussing traumatic experiences with a near-stranger.

But the process of actually trying to provide legal representation is far from expedited.

Pro bono attorneys, interpreters and medical experts may experience delays caused by lockdowns or bureaucracy even after making the long commute to a detention center, said Pistone.

She's had trouble getting doctors admitted to detention centers to evaluate scarring as evidence for immigrants' applications for asylum or crime victim visas. In one case, a doctor was allowed to enter but not allowed to bring medical equipment or borrow the detention center's equipment.

"You waste a lot of time" going through security, waiting for officials to bring your client and waiting for a confidential meeting room, said Katy Murdza, advocacy coordinator for the Dilley Pro Bono Project. Rules on what can be brought in seem arbitrary and sometimes change unexpectedly. Detention centers prohibit cell phones and sometimes even laptop computers, forcing attorneys to type up handwritten notes at home after a long day visiting clients.

These issues and the fact that Dilley is located about 75 minutes from the nearest large city — San Antonio, Texas — make it difficult to find enough pro bono aid to fill the needs project staff can't meet alone, said Murdza.

Most of the 11-person staff "has made the sacrifice to live in Dilley" and works long hours, including evenings and weekends, she said, but the project has only managed to get enough help by bringing in groups of about 30 volunteers for a week at a time. The project's website warns volunteers to expect "12-15 hour days, full of physically and emotionally exhausting work." 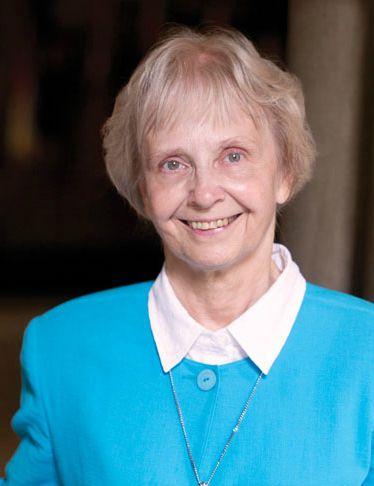 Sr. Suzanne Susany (Courtesy of the Sisters of St. Francis)

Franciscan Sr. Suzanne Susany, an immigration attorney in Pittsburgh, told NCR that when she represents detained immigrants, she immediately tries to get them released from detention. The closest detention center is three and a half hours away, and communicating over video chat, while sometimes allowed, can be difficult.

Getting migrants released on bond allows her more time to prepare the case, gives her better access to the client and makes it easier for the client to gather information.

In San Diego, where Casa Cornelia Law Center represents all unaccompanied children detained in the area as well as hundreds of adult asylum seekers, many of them detained, the commute to Otay Mesa Detention Center is shorter: 45 minutes.

But according to Society of the Holy Child Jesus Sr. Ann Durst, the center's co-founder and a current board member, it's still difficult to incorporate other attorneys, and Casa Cornelia staff have to handle most of the representation. About 1,000 children are detained in the area each year, and recent changes in immigration court have increased the workload for each case. They aren't able to offer legal aid to all adults who need it.

From the point of view of detained migrants, the situation isn't any easier. While all three family detention centers in the U.S. are supported by pro bono projects, those in adult detention have an extremely difficult time finding affordable legal aid.

The government doesn't provide attorneys in immigration court because deportation is considered a civil rather than criminal penalty, even though for some migrants it can mean being returned to a country where they are at risk of persecution.

The Transactional Records Access Clearinghouse at Syracuse University, which analyses government data, found in late 2017 that representation can make a five-fold difference in positive outcomes for asylum cases and reported that overall representation rates for detained immigrants were around 30 percent compared to around 70 percent for those never detained.

Detained migrants are "given a list of pro bono and reduced fee agencies, but most of the time they're just full," said Susany.

Murdza often hears from clients that their separated family members — including husbands and adult children — can't find representation. "We're very fortunate in those few cases where we can find a similar pro bono project that can help a family member," she said.

Even those represented by Murdza's organization are usually dealing with inadequate medical care, family separation, or their children's developmental regression due to trauma. While experiencing those stresses, they have to explain why they are afraid to return home and should be allowed to apply for asylum in the U.S. They sometimes struggle to access documents they need or speak with people who are outside of detention or detained elsewhere.

Phone calls to relatives with more information can be essential because it's common for women to be sheltered from essential details of their cases. A husband may have said he was menaced by gang members, for example, without sharing that the threats were directed at his wife and children as well. That detail "could be the difference between a positive and negative because it's not just a case for the husband, it's a case for them as well," said Murdza.

Better access to affordable phone calls is one major positive change detention centers could make, Murdza said. People can lose cases because they can't afford phone calls or because detained migrants' requests to call another detention center aren't honored, sometimes because the person was transferred and the center didn't follow up. "This can mean the difference between life or death for someone because they need that information about their case."

In one case, a woman was deported after failing her credible fear interview. The Dilley Pro Bono Project had requested in writing that the woman first be allowed to complete a phone call with a relative who could explain her situation: She had been shot in the head and was having memory issues. Instead, officials pressured her to go forward with the interview without receiving the phone call.

"You can't fret about the needs that are not met because your energies are really required to represent each of these clients."

Access to information located in belongings that the center has placed in storage for migrants is also difficult, Murdza said. Although the center is supposed to respond to requests to access belongings within three days, often the responses are nonexistent, irrelevant, inadequate or even offensive.

Murdza has also experienced officials spreading misinformation about the process of getting an appointment with legal counsel or making people wait up to eight hours for vaccinations in the medical area instead of letting them prepare with their attorneys for imminent credible fear interviews.

The Dilley Pro Bono Project has "raised all of these issues to ICE," Murdza said, usually without receiving a response. They also "frequently make complaints to the Office of Civil Rights and Civil Liberties," an oversight agency for the Department of Homeland Security, which typically says it's investigating but doesn't often change the situation.

Other legal aid providers expressed similar frustrations. Casa Cornelia usually passes concerns to groups like the American Civil Liberties Union so the center can focus on legal aid rather than advocacy. While Durst thinks the entire asylum system needs to be reformed, she also tries not to get swallowed up in big picture issues.

"We're very aware that we can't do everything, so the focus always has been on one case at a time and to exercise real diligence," Durst said.* "… You can't fret about the needs that are not met because your energies are really required to represent each of these clients."

*An earlier version of this story misattributed Durst's quote.