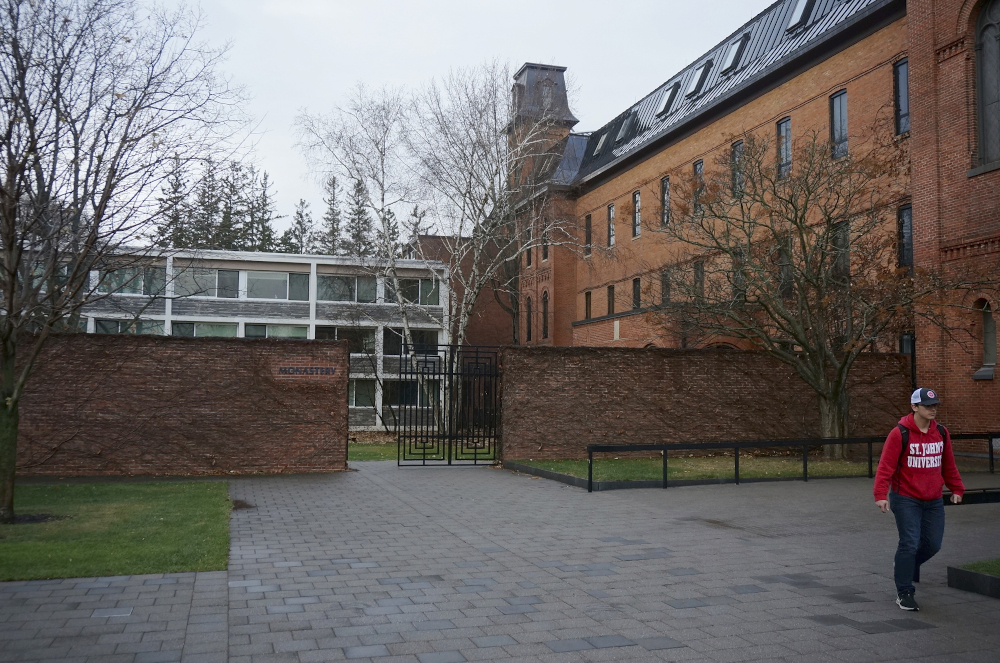 A person walks in front of the Benedictine abbey on the campus of Saint John's University in Collegeville, Minnesota, on Nov. 8. (AP/Giovanna Dell'Orto)

As monks chanted prayers in St. John's University church, members of the student LGBTQ organization, QPLUS, were meeting in their lounge at the Minnesota institution's sister Benedictine college, a few miles away.

To Sean Fisher, a senior who identifies as non-binary and helps lead QPLUS, its official recognition and funding by St. John's and the College of St. Benedict is welcome proof of the schools' "acknowledging queer students exist."

But tensions endure here and at many of the hundreds of U.S. Catholic and Protestant universities. The Christian teachings they ascribe to differ from societal values over gender identity and sexual orientation, because they assert that God created humans in unchangeable male and female identities, and sex should only happen within the marriage of a man and a woman.

"The ambivalence toward genuine care is clouded by Jesus-y attitudes. Like 'Love your neighbor' has an asterisk," Fisher said.

Most of the 200 Catholic institutions serving nearly 900,000 students have made efforts to be welcoming, said Fr. Dennis Holtschneider, president of the Association of Catholic Colleges and Universities. 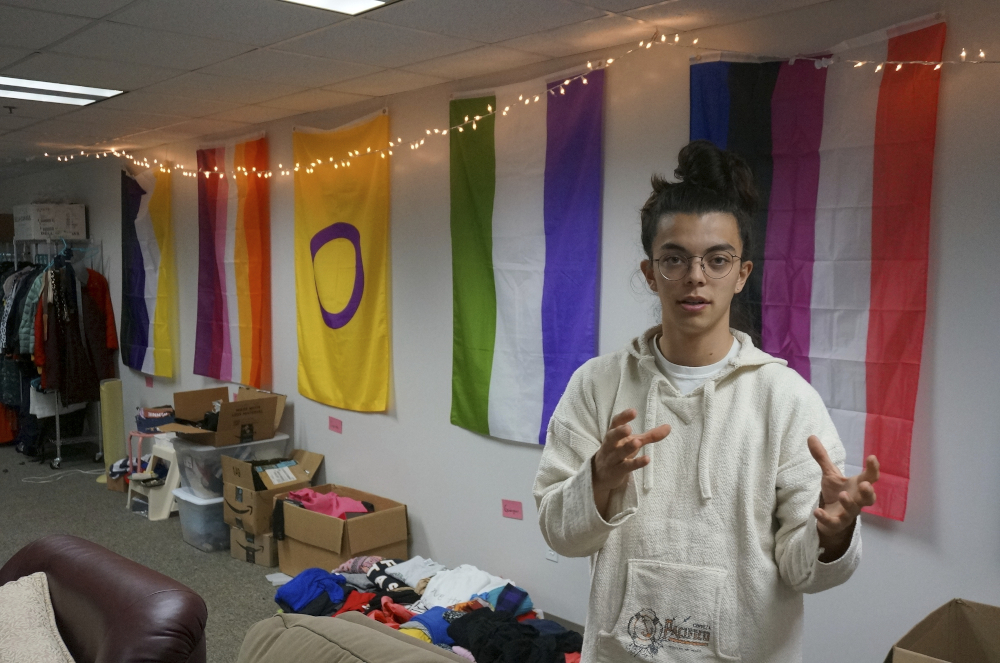 Sean Fisher, one of the student coordinators for QPLUS, the LGBTQ student organization for the College of St. Benedict and St. John's University, stands in the organization's dedicated lounge on the college's campus in St. Joseph, Minnesota, on Nov. 8. (AP/Giovanna Dell'Orto)

Among Protestant institutions, a few push the envelope, and most hope to avoid controversy, according to John Hawthorne, a retired Christian college sociology professor and administrator.

"Denominations won't budge, so colleges will need to lead the way," Hawthorne said, adding there might not be enough students in the future interested in conservative colleges. "Today's college freshman was born in 2004, the year Massachusetts legalized same-sex marriage."

Most Christian schools list "sexual orientation" in their nondiscrimination statements, and half also include "gender identity" — far more than did so in 2013, said Jonathan Coley, a Oklahoma State University sociologist who maintains a database of LGBTQ student policies at Christian colleges.

But translating nondiscrimination into practice creates tensions and backlash. At some conservative schools, discrimination complaints have been filed, while some parents and clergy argue more affirming institutions are betraying their mission.

"We have to learn to live with this tension," said Fr. Donal Godfrey, chaplain at the University of San Francisco, a Jesuit institution in a city with a history of LGBTQ activism and a conservative Catholic archbishop opposed to same-sex marriage.

Other campus leaders see tension in Catholic teachings tending to skew conservative on human sexuality but progressive on social justice.

"It's kind of a tightrope," said John Scarano, campus ministry director at John Carroll University, a Jesuit school near Cleveland.

To parents and prospective students undecided between John Carroll and Franciscan University in Steubenville, Ohio, Scarano says, "Here, your Catholicism is going to be challenged."

At Franciscan, "we don't move away from the truth of the human person as discovered in Scripture, the tradition of the Church, and the teaching authority of the Church," said Fr. Jonathan St. Andre, a senior university leader, adding Franciscan doesn't tolerate harassment of those who disagree.

Students' safety is a priority, said Mary Geller, the associate provost at St. John's and St. Benedict. The single-sex institutions in Minnesota now admit students based on the gender they identify with, and consider transfers for those who transition.

That enrages a few parents, like a father complaining "that we have students with male body parts in a female dorm," Geller recalled. "I just said, 'Sir, I don't check body parts.' "

In May, the Department of Education's Office for Civil Rights launched a separate investigation for alleged violations of LGBTQ students' rights at six Christian universities — including Liberty University.

The independent evangelical university has greatly expanded its prohibitive rules, forbidding LGBTQ clubs, same-sex displays of affection, and use of pronouns, restrooms and changing facilities not corresponding to a person's birth sex. Liberty's student handbook bans statements and behaviors associated with what it calls "LGBT states of mind."

"Liberty is very anti-gay," said Sydney Windsor, a senior there who came to Liberty to quash her attraction for women and now identifies as pansexual. "It's years of irreversible trauma."

"If we can get faculty to come out and to have queer people openly represented on campus, that would be really big." 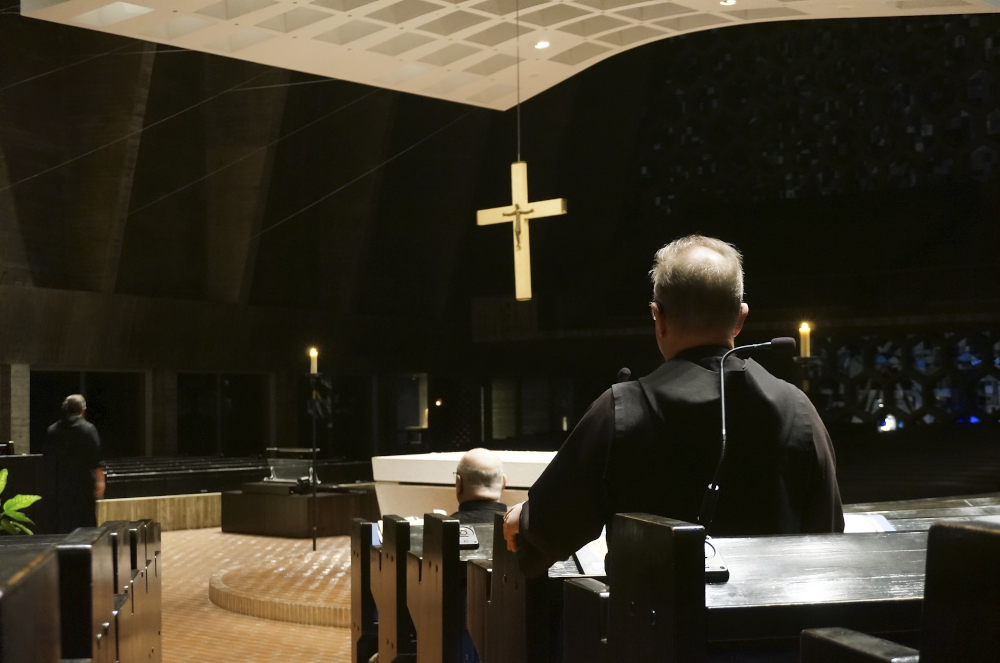 Benedictine monks gather for evening prayers in the mid-20th century church next to their abbey on the campus of St. John's University in Collegeville, Minnesota, on Nov. 8. (AP/Giovanna Dell'Orto)

At some evangelical schools, the fight for rights has moved to LGBTQ diversity in faculty and staff hiring.

This year, Eastern University, located in St. Davids, Pennsylvania, and affiliated with American Baptist Churches USA, amended its policies to allow for hiring faculty in same-sex marriages — one of only a handful of evangelical schools to do so.

"If we can get faculty to come out and to have queer people openly represented on campus, that would be really big," said Faith Jeanette Millender, a student there who identifies as bisexual or queer.

A clash between students, faculty and the school's board of trustees over hiring LGBTQ faculty is unfolding at Seattle Pacific University, a Free Methodist Church-affiliated school.

The faculty held a vote of no-confidence in the board over its keeping the policy barring people in same-sex relationships from full-time positions. Faculty and students have also sued the board for breaching its fiduciary duty.

"I know how much Christianity has brought harm to communities, whether its people of color, women, or LGBTQ people," said Chloe Guillot, 22, an SPU graduate student and one of 16 plaintiffs in that lawsuit. "I have a responsibility to step into those spaces and be willing to fight back. As someone who is a Christian, we need to hold ourselves accountable."

The administration responded to one of the suits in a court filing saying it expects students and faculty to "affirm the University's statement of faith, and to abide by its lifestyle expectations, which together shape the vision and mission of the institution."

To students, concrete actions will show if LGBTQ people can truly be welcomed on Christian campuses.

Ryan Imm, a St. John's junior and QPLUS leader who identifies as gay, recalled an anti-LGBTQ slur used on his residential floor. But he also pointed to hopeful signs — like St. Benedict's popular drag show.

Associated Press religion coverage receives support through the AP's collaboration with The Conversation US, with funding from Lilly Endowment Inc. The AP is solely responsible for this content.