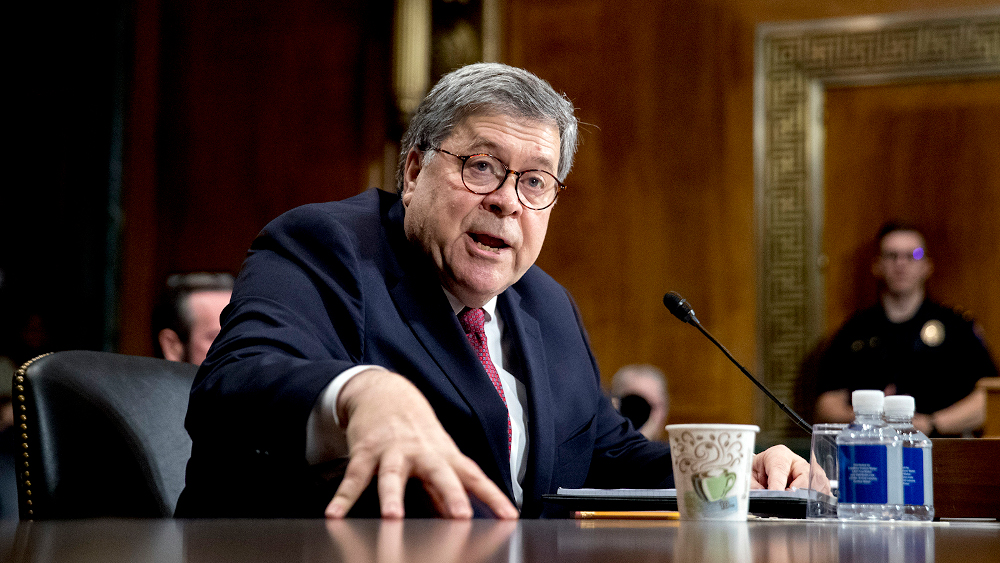 Attorney General William Barr testifies during a Senate Judiciary Committee hearing on Capitol Hill in Washington on May 1, 2019. (RNS/AP/Andrew Harnik)

The complaint, filed last week (Oct. 24) with the Justice Department's Office of Professional Responsibility, objected to Barr's saying at an appearance at the invitation-only event that religion "gives us the right rules to live by" and that the generation that founded the United States were Christians who "believed that the Judeo-Christian moral system corresponds to the true nature of man."

The attorney general added, "Those moral precepts start with the two great commandments — to love God with your whole heart, soul and mind; and to love thy neighbor as thyself."

Faithful America's complaint is not the only criticism Barr's speech has elicited. C. Colt Anderson, a Roman Catholic theologian and professor of religion at Fordham University, declared to The Guardian after reading the speech that the attorney general represents a "threat to democracy." National Catholic Reporter columnist Michael Sean Winters derided the speech as "ridiculously stupid."

But Faithful America said that Barr showcased a disregard for religious minorities, suggesting the speech may have been "coordinated" with Trump's re-election bid. "He cited perceived attacks on conservative Christianity as evidence of 'secular' and 'progressive' attacks on religious liberty," the complaint noted, "but did not mention any other religions, despite numerous recent attacks on American Muslims and Jews from supporters of the (Trump) administration."

The group also pointed to Barr's attack on "militant secularists," as well as his assertion that "no secular creed has emerged capable of performing the role of religion," which it argued amounted to "an inappropriate favoritism to religion over nonreligion."

"The Attorney General specifically lifted up Judeo-Christian values as 'the ultimate utilitarian rules for human conduct,'" the complaint read. "While this was one of five references to 'Judeo-Christian' values and moral systems, Mr. Barr also made numerous positive references to Christianity alone, but no mentions of Judaism alone."

Favoring religion over nonreligion and Christianity over other faiths, the group alleged, "is a violation of Mr. Barr's oath to support and defend the Constitution's guarantee of religious liberty to all Americans, not just those who hold Judeo-Christian views."

The Office of Professional Responsibility is charged with investigating Department of Justice attorneys accused of misconduct or crimes.

As remedies for the speech, Faithful America listed several requests: that the speech be removed from the DOJ website, that Barr apologize and that he "deliver a new speech outlining new steps to combat right-wing attacks on the religious liberty of Muslims, Jews, Sikhs, progressive Christians, American Indians, and atheists."

A representative for Faithful America said the group has not heard back from the Department of Justice about the complaint, and the agency did not immediately respond to requests for comment.