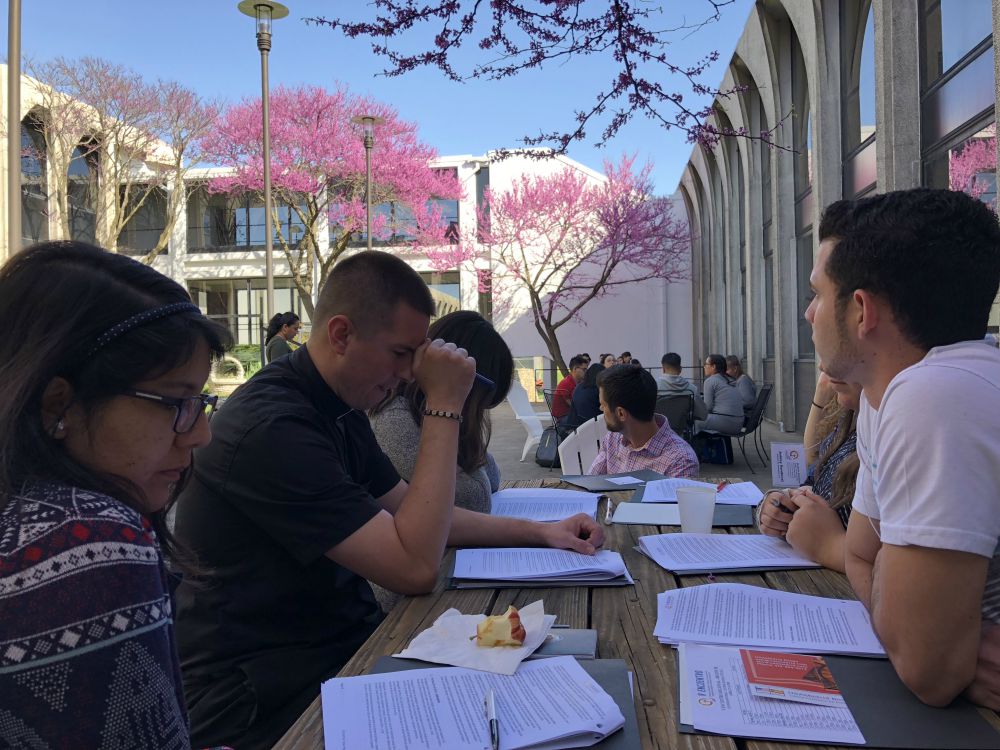 Members of Pastoral Juvenil — a Hispanic youth and young adult ministry — reflect on the working document, discussing their priorities as a ministry at the regional encuentro for the dioceses in Iowa, Kansas, Missouri and Nebraska in late April . (NCR photo/Soli Salgado)

With parish and diocesan encuentros wrapped up, diocesan delegates have moved on to the regional level of the V Encuentro — a four-year grassroots consultation with Hispanic Catholics throughout the United States. (Encuentro is Spanish for "meeting," though more in the spirit of "an encounter.")

Representatives from 14 out of the 15 dioceses throughout Kansas, Missouri, Nebraska and Iowa gathered in a retreat center April 27-29 in Kansas City, Kansas, to talk about Hispanic Catholics in the heartland: What concerns have been percolating? How should we prioritize our needs?

"There's so much that I'm going to take from this experience," said 28-year-old Rosemary Gonzalez, from the Diocese of Davenport, Iowa. Working in the faith formation and catechesis ministry, Gonzalez is also in leadership formation in her diocese.

"I've written down everything from all the people that I'm meeting, and I ask them questions because I want to know what else is happening in a big family. I hope to take all that to our parishes to say, 'Hey, we might not have this, but look, there's this over there.' … It's a way to see the Catholic Church as a whole and what we can do to be united." 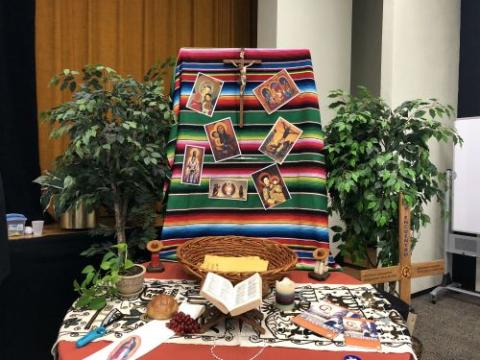 Display at the front of the room at Our Savior Retreat Center in Kansas City, Kansas. Speakers and conversations frequently switched back and forth between Spanish and English. (NCR photo/Soli Salgado)

A 30-page working document — the culmination of all previous parish and diocesan encuentros — was at the center of all discussions. Milagros Calvetti, director of Hispanic ministry in the Diocese of Springfield-Cape Girardeau in Missouri, said the document is essentially the "first snapshot of who we are and what our priorities are in each diocese, but from a different perspective: from the grassroots up." It will guide regional strategies in the years that follow the encuentros.

Using that document, the 135 attendees at Our Savior Retreat Center broke out into smaller groups according to their respective ministries. Those involved in faith formation and catechesis, for example, reviewed the list of requests and suggestions that have been compiled at the parish and diocesan encuentros. They then discussed which ones make sense to prioritize, what parishes would need to make that happen, and identify obstacles that might come up.

"What's mostly surfaced for all of us is the opportunity that this process has given small faith communities in recognizing what their role is in the church, the need for developing leadership and the key focus of youth and family," said Calvetti, who is a co-chair of the core regional team for Hispanic ministry that meets every two years, this time guided by the V Encuentro process.

"This was icing on the cake, reiterating what we have been doing for the last 25 years in our region," she said. "It gave us more of a perspective, or at least strategies, on what will follow this process."

Among the catechesis ministry, one priority that surfaced after group discussions was organizing retreats as a form of evangelization and to maintain participation among parishioners.

Blanca Sandoval, who's been doing catechesis for 15 years in her parish in the Diocese of Dodge City, Kansas, said that parents in particular need to get more involved in parish life. A strong catechesis ministry, she said, is "not to just educate the kids, but the parents at the same time. … [It's] not like, 'They did their first Communion so we're going to leave it there.' It has to be a continuation — year after year. That's one of my goals," she said.

One group within the catechesis ministry said that, in order to make that happen, they need to train and prepare leaders who are capable of organizing, delegating and committing. Incidentally, identifying young, committed leaders is a key goal in the V Encuentro process. Follow-ups are crucial, too: People often leave retreats emotional and inspired, but that energy eventually dies down when it's not intentionally tapped. 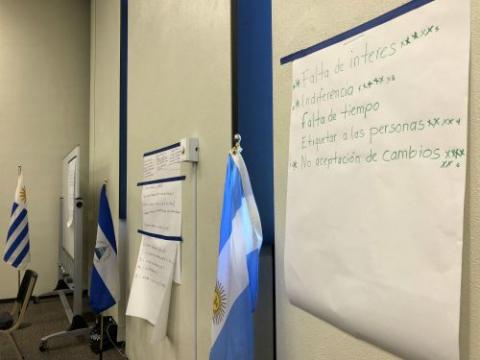 One idea that the young adults supported was offering vouchers and scholarships for lower-income Hispanic students to attend Catholic schools. One participant who attended Catholic elementary school said that a Catholic education was "key for that push. It taught me about my faith, I had friends who could share that faith and that mentality, and that was a beautiful experience. It keeps you close to the church at a key age."

The No. 1 priority that emerged from these discussions, however, was the need for space: a judgment-free zone to provide human and religious development, mentorship, counsel, faith formation, and to foster vocations.

"It all begins in the parish," one of the participants said in the group chats. "The Catholic Church needs more groups. I see other Christian churches that have a ton of groups — there are always groups and they always gather outside the church. But at our churches, after Mass, it's over, so I like the idea of creating groups, for Hispanics but also for [Anglos] to join together."

"I'm a very strong believer of small faith communities and bringing forth leadership, especially with such a diverse Hispanic population that we have, and the V Encuentro definitely gives us that booster shot."
— Milagros Calvetti

That the V Encuentro is intended for Hispanic Catholics has been a point of confusion for some: Are its goals specific to Hispanic U.S. Catholics alone?

For Luis Hernandez, a delegate from the Diocese of Springfield-Cape Girardeau, Missouri, the main message he wanted to bring to the regional level from his parish was "the need to share our faith, share our culture, but more importantly, to build together one dream.

Calvetti said the regional team will gather after the National V Encuentro in September — a "post-encuentro" — where they will start forming think-tanks and strategizing for ministries, particularly with the youth and young adults in mind.

"I'm a very strong believer of small faith communities and bringing forth leadership, especially with such a diverse Hispanic population that we have, and the V Encuentro definitely gives us that booster shot," she said.

"It was an opportunity for their presence to be validated in the church. We see, 'Wow, we have a big responsibility, we are accountable, we are important to the church.' That was really brought to surface, and how their feedback and participation in all of this is important for the church in the United States."